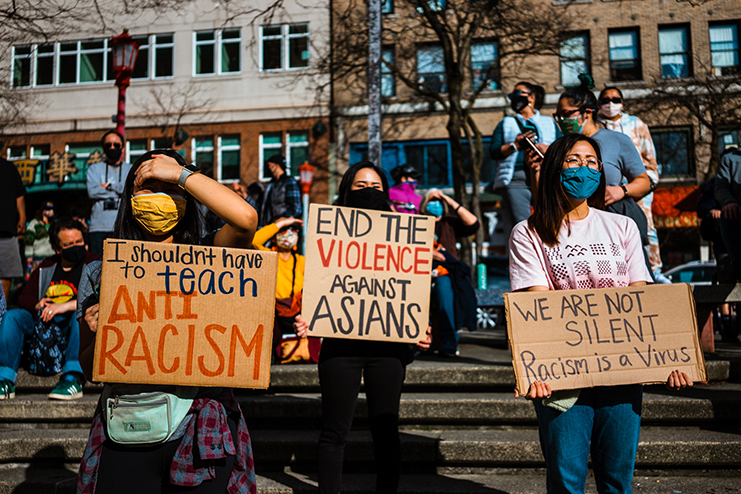 This article is part of a special project between the International Examiner and the South Seattle Emerald to produce content in 2022 addressing Asian and Pacific Islander racism and resilience. This content was made possible by a grant from the Seattle Human Services Department.

an unmarried girl from Mainland China is murdered
her remains refused out of custom by her own people,

from the morgue; twelve times a year she sent money
home to build more rooms, a bigger house for her mother,

brother, clan; when the family patriarch died,
she quit school as a teen, worked in factories

her past now forgotten, to be remembered
as spa worker, undocumented illegal,

a “manless girl,” not sister, daughter, migrant;
model parents will frighten their children, point to her

example, as who not to be – the risks of going
too far, forsaking a husband, breaking with belief;

the ancestors can’t keep close watch over faithfulness
if they don’t board planes, speak English

with the freedoms of a man, with the liberties
of those that are given immortality, not realizing

my 6-year-old boy is old enough
to remember his first protest,

before the vaccine, we weren’t ready
to march, piling instead into our tiny

black sedan to caravan with other families
from the neighborhood school

before the convoy, I explained to my son
what happened to George Floyd,

how his life was harmed; how someone
in uniform who looks like mommy,

turned the other way while a human life was
snuffed out; in those last moments, how the dying man

cried out for his mother, who could not hear him,
how we must never stop using our privilege,

to listen, to name what is inhumane

they came with their vision for a better future, my parents
like so many Chinese before them, my father’s head

of Doris Day; not Anna May Wong; when I warn them
both of the uptick in violence, I know they will say they

away to other Asians in some other part of town; other Asians
say the shooter slipped through the cracks, mental illness,

one bad apple, because to admit the structures of hate
are so much larger than any one of us, is to erase

the fantasy that a better life was ever available
to us beyond a dream; our stories acted out

by people that look and sound nothing like us

his first girlfriend in kindergarten,
held his sweaty hand, been his first

love, even as he told everyone to hate,
that I came from a family of Communists;

none of it true; “We felt sorry for you”
he stated, as I looked for some sign

of alliance in a white mother,
his Mexican father, because he bore a name

that marked him as different too, whether
or not he spoke the language of his antecedents,

it is distinct from other Asian identities
including our own, we fought back

with our minds, and our words

but not our bodies, which remember
their own truths; the cold touch

I carried with me throughout my teens;
the cannister of mace I bought in college

in more recent days, I consider other forms
of self-defense, right-leaning well-meaning

strangers tell me to acquire a license for a handgun,
since nothing ends an argument like “putting a hole

in someone”; the only witness on the scene
reported that the shooter locked the doors,

aimed for their heads, like the streetwalker with a hammer
who struck out at the woman’s skull, the invader who beat

the old woman unconscious with a concrete brick in her own shop,
the first responder who threw rocks hidden inside a sock

like a weapon at the masked face of the Japanese teacher
of school children, taking away her capacity to smile

these days, we choose to keep our kids
away from school, I am, we are, part

of a growing count – what we have to do
to keep ourselves alive, where I’d only known

the menace of more violent attacks before,
been the recipient of hate mail, stalking,

that all lives matter, can be equal,
that the lives of Asian women matter,

the lives of our grandmothers,
our mothers, our sisters,
our daughters

This poem was “commissioned by The Slants Foundation for Rock Paper Radio.