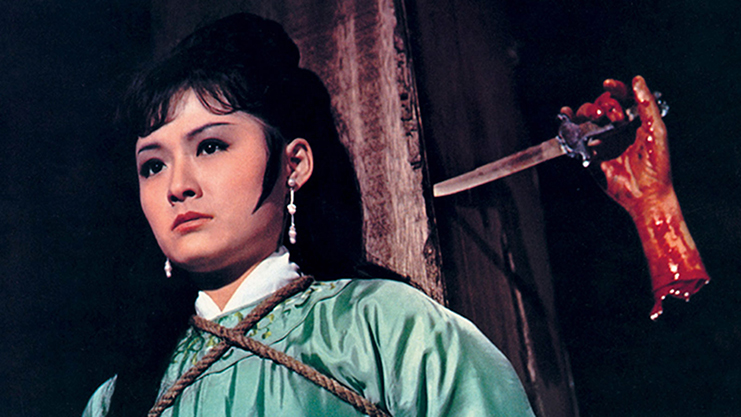 Shaw Brothers is a venerable name within the film industry, lauded and credited by critics for setting the standard for martial arts films through the numerous amount of movies it churned out each year. Their production studio, Shaw Brothers Studios, specialized in Mandarin swordplay films and launched the prolific careers of several directors and actors such as King Hu, Chang Cheh, Cheng Pei-Pei and Jimmy Wang Yu. Having produced about 350 martial arts films, mostly from the late ‘60s-‘70s, there’s no doubt the studio made a significant impact on the martial arts genre. The lasting influence Shaw Brothers Studios has on contemporary filmmakers are shown through the works of directors such as John Woo and Quentin Tarantino.

Regarded as the epitome standard for all martial arts films to come, “Come Drink With Me” is the movie that skyrockets 19-year-old ballet dancer Cheng Pei-Pei’s career as she enacts the lead role of Golden Swallow. An instant hit in the Hong Kong box office, this film would be the last movie King Hu would direct for Shaw Brothers before leaving to pursue a career in Taiwan.

Zhang Buqing, a government official, is kidnapped by a group of ruthless bandits. Knowing that he is the son of the governor, they demand that he plead to his father for his life in exchange for the life of their leader, who was being held prisoner by the governor and faced execution charges. When Zhang refuses, the boss sends one of his henchmen to send the message for him. The only concern they have is dealing with Golden Swallow, who has defeated them before.

Unbeknownst to them, Golden Swallow (Cheng Pei-Pei) is a woman and the governor’s daughter. Golden Swallow must race against time as she must find her brother within five days, or else he will be killed. An unlikely savior rises to the occasion in the guise of a drunk fool who gives her hints and helps her out of dire situations. She later finds out he is a kung-fu master with deeper connections to her foes than she realizes.

King Hu started using film techniques that had not been used previously in the world of martial art film. Incorporating what he knew about Japanese samurai film and Western editing techniques, along with Chinese aesthetic philosophy revolving around music and opera, he started utilizing moving camera shots, long takes, more realistic action, and the strategic use of tension during fight scenes. His decision to use Cheng Pei-Pei and her excellent delivery in her role as Golden Swallow also cemented and paved the way for more female protagonist roles in future martial arts films. For fans of fight scenes and those who know how to appreciate the technical beauty of films, “Come Drink With Me” is an excellent movie to add to anyone’s viewing repertoire.

Known as the “Godfather of Hong Kong Cinema,” Chang Cheh is yet another venerable director that worked with Shaw Brothers. Unlike King Hu, whose films seem to be works of technical perfection, Chang Cheh liked to combine drama and character development with action. Being the first film to gross 1 million Hong Kong dollars, it established Cheh as one of the best in Hong Kong and also launched Jimmy Wang Yu’s career.

Fang Gang (Jimmy Wang Yu) is a servant whose father, Fang Cheng, died while protecting his master, Qi Rufeng, from an ambush at his home. Before Fang Cheng died, Qi Rufeng promised to take Fang Gang in as one of his students. As he and his fellow brothers grow up, Fang Gang is clearly favored by their master. Driven by jealousy, two of his martial arts brothers and the master’s daughter, Pei-er, concoct a plan to punish him by asking him to meet them in the woods once midnight strikes. Unfortunately, the punishment turns out to be severe as Pei-er ends up accidentally lopping off one of his arms.

Fortunately, Fang Gang is taken in by a woman who nurses him back to health. While he heals, his master’s enemies design a weapon specially designed to successfully parry sword attacks from Qi Rufeng and his students. As Qi Rufeng’s students gradually start to disappear, Fang Gang must make the crucial decision as to whether he should continue devoting his life to martial arts or to settle down and live a simpler life. For people who enjoy movies for story and character development, Chang Cheh movies would be the better pick over King Hu.

This film is the sequel to “Come Drink With Me,” but directed by Chang Cheh. Cheng Pei-Pei returns as Golden Swallow, and Jimmy Wang Yu co-stars as her love interest Silver Roc.

Golden Swallow and Silver Roc had trained under the same master when they were younger, but Silver Roc disappeared after mastering all of his master’s techniques to avenge the death of his family. Years later, he still pines for Golden Swallow, but his pride prevents him from approaching her directly. Instead, he tries to lead her toward him by committing a spate of violent acts against hardened criminals and thugs in her name. Now with her life at risk as many people try to avenge their comrades’ or fallen loved ones, Golden Swallow is forced to find Silver Roc. Things get more complicated as Han Tao, a love interest, wants to stop Silver Roc and his path of destruction once and for all to protect Golden Swallow. A gripping tale filled with love, action and romance that will give your heart non-step rest as it races over action sequences and make it burgeon with longing as it cheers fervently for Team Roc or Team Tao.