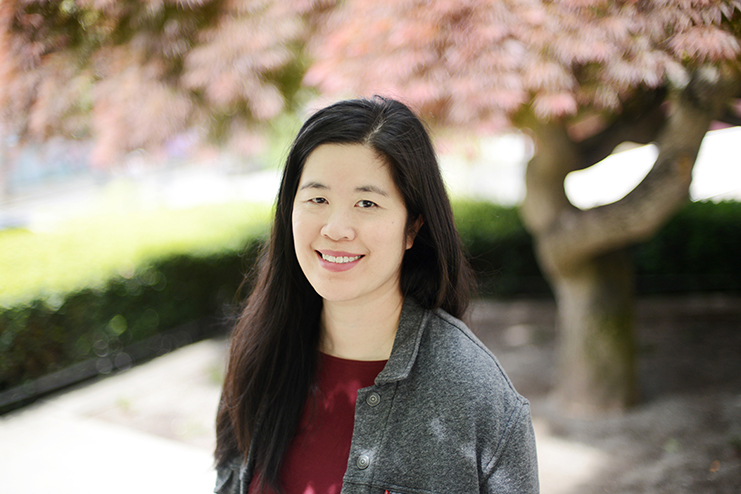 Shannon Gee is many things: A longtime Beacon Hill resident. An award-winning documentarian. General manager of the Seattle Channel. But, at her core, she is what she has been since 6th grade when she wrote her first script: a storyteller.

The art of the story is a time-honored craft bestowing wisdom from one generation to the next. It is how we as humans learn from our collective experiences. The medium might change over time — from cave drawings to staring into our phones — but the craft remains the same.

Through stories, humans become immortal. Blessed is she who can weave a good story.

Gee — who will be honored Sept. 26 for Leadership in Media as an International Examiner Community Voice Awards (CVA) honoree — is a winner of eight Northwest Emmys and has been nominated for more than 40.

Gee has “pretty much done almost every job you can do” at the Seattle Channel since she joined in 2005 as a contract producer. “I’ve been a camera person, an editor, a writer, I’ve managed shows, pulled up cable,” she said. And now as general manager, she is charged with stewarding a valuable community resource.

“I’m really fortunate that I have the opportunity to lead this incredible team that cares about their community as much as I care about the API community,” she says as she sips coffee on a sunny Friday afternoon. “It makes us care about Seattle a lot, and really dive into those issues and celebrate arts and culture.”

Gee was originally brought in to launch Community Stories, a regional and national award-winning documentary series that she says speaks to the core of what Seattle Channel is about.

“It may not be more than providing a window to government by broadcasting council meetings,” she said. “But my predecessors had a vision about using this public media community resource to do more. I was brought in kind of early when they re-envisioned the channel a few years into it to actually launch Community Stories, launch a documentary series that would help talk about the diverse communities in Seattle.”

As part of the series, Gee told the origin story of the Massive Monkees, the renown breakdancing troupe based on South King Street, from its humble beginnings at the Jefferson Community Center to international champions.

In “One Generation’s Time,” Gee told the story of Seattle Filipino American fishing cannery union activists Silme Domingo and Gene Viernes, who were murdered for their union reform work.

“It’s a real traditional, historical documentary about a very important story and people from our community and the people around them,” she said.
These productions are opportunities to tell stories that otherwise could be missed.

“They elevated the history and people of our Seattle API community,” she said. “But I also got the opportunity to share these stories with the wider API community at film festivals and, with ‘One Generation’s Time,’ at social justice and labor film festivals.”

Storytellers usually need to say something to tell a story. But, as Gee says, good storytelling is about the ability to do quite the opposite — listen. “It’s getting to know people, also paying attention,” she said. “Everybody has a story, somewhere in there. They might not think that it’s the most important, groundbreaking, like an Oscar-winning-movie-out-of-my-life story, but here in our amazing API community, people’s lived experiences are incredible.”

These experiences include the powerful stories of Japanese-American incarceration, and the Nisei veterans who fought for the United States in World War II.

“A lot of the work I’ve been really grateful and honored to do is with the Nisei vets,” she said. “That is an Oscar-winning movie right there and the story of what the whole Japanese-American community endured during and after World War II.”

Gee’s “An American Hero” series spotlights the stories of Shiro Kashino, who was incarcerated with his family in Idaho, and Frank Nishimura, who fled to Eastern Washington to avoid incarceration. Both went on to enlist in the U.S. Army and become decorated war heroes.

As a documentarian, Gee has taken on some heavy topics. But as a young girl, her love of stories began with the hour-long block of Warner Brothers Bugs Bunny cartoons on TV.

While only in 6th grade, Gee wrote a story that would be produced as a school play. “There was a big food fight at the school,” she says, amused. “And so the news cameras came in to report on it, and it actually rose to the level of the president. Reagan was president at the time, so I had written this whole thing about him weighing in from the Oval Office about the food fight at Dearborn Park Elementary School.”

As a child, Gee was a member of the Seattle Chinese Community Girls Drill Team. During breaks, Gee and her friends would go to the Yick Fung Co. — a store run by Jimmy Mar, or Uncle Jimmy, in the International District — to get some treats.

“I don’t like sour plum candy, but my sister does, and just about everyone else,” Gee said. “I would tag along to the store because it was fun to do.”
Uncle Jimmy’s store, established in 1910, was moved in its entirety to the Wing Luke Museum, where it is now a permanent exhibit.

“He was for us the neighborhood shopkeep. And then, as we got older, he was also the funeral director for the community — so he did my grandparents’ funeral, he did my mom’s funeral.”

“It’s amazing to capture his history and his presence in the community,” she said. “And that’s one of my most favorite sort of aside thing — yeah let’s run the cameras in Uncle Jimmy’s shop. And it’s now the history. Just think of how quickly you could just not do that story.”

For Gee, being able to do a story on someone who so exemplifies the spirit of the historic Chinatown International District (CID) is why she does what she does.

“That kind of interaction is what seems core to me in the CID,” she said. “Having friends, colleagues and family who know each other around the district, helping each other out on small things like running some soy sauce over to another business, or assisting in bigger issues, like health care, housing, supporting arts and culture.

“Uncle Jimmy told me his dad instilled in him that we all need to help each other. He practiced that his entire life, from his base on King Street in the Yick Fung Co. And I think that is how he represents the community and the people in it. I look at the other recipients of the CVA — Chera, Lori, and Sue — and they, too, carry that torch in ways unique to their talents and to the benefit to all the community.”