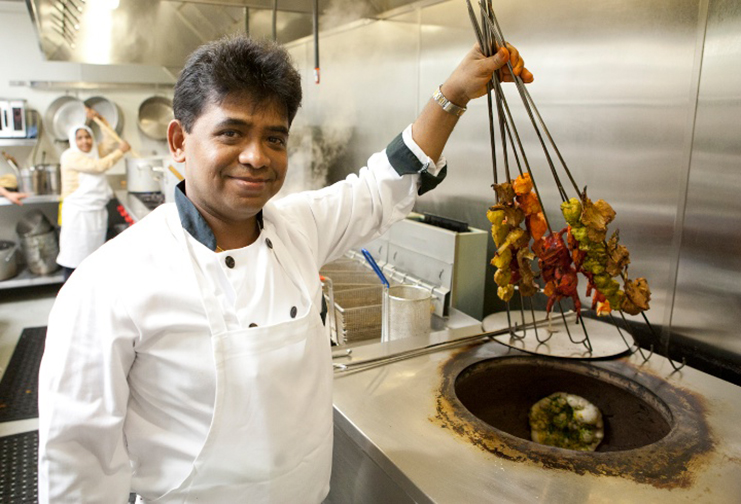 For the past 10 years, Chef Muhammad Salah Uddin has been at the helm of one of Seattle’s most popular and loved Indian and Bangladeshi restaurants, Bengal Tiger, located in the Roosevelt neighborhood of Seattle. He immigrated to the United States from Bangladesh in 1986. “I came here for the same reason everyone else has – to build a better life for myself and my family,” he said. Along the way, he became a community leader, a philanthropist, a successful entrepreneur and one of the most widely recognized Bangladeshi chefs.

Uddin said he’s always loved the taste of Bangladeshi food, especially his mom’s cooking which he grew up eating. Back in Bangladesh, he was an avid soccer player, and every day before he hit the field to play, his mom would whip up traditional Bangladeshi food for him and he would watch her keenly while she cooked. But all the time he was growing up, he’d never even picked up a ladle.

In 1986, he immigrated to LA with that focus to build a better life for himself and his family and found himself helping his uncle run his restaurant business. He learned how to cook South Asian food on the job. For three years in the early nineties, he worked at East India Grill on Beverly and LaBrea.

Then an opportunity came up in Seattle. Uddin moved to Seattle in the winter of 1994. After growing up in Bangladesh and then living in southern California for several years, he was not very happy about the move. “I just did not want to live in this cold weather.” But he had a friend who wanted him to help out at his restaurant, the India Gate Restaurant in Bellevue, so he decided to give it a try. Here, he gained even more experience as a chef and wore multiple hats as he learned how to provide better customer service and quick service.

When his friend’s plans to open a new Mexican restaurant got delayed, Uddin found himself with some rare time off from work so he took a trip to London to visit family and friends, and when he came back a month later, he felt ready to not only revamp his career as a chef but also start his own business. And in pursuing these ambitions, he found himself soon being, as they say, the talk of the town.

Uddin landed a chef’s position at Mughal Palace in Bellevue, and it was here where things for Uddin seemed to take off. Word spread quickly of the chef’s talent. Soon, John Hinterberger, Seattle Times food and restaurant reviewer at the time, called Mr. Uddin to understand how he cooked his food. He even asked for recipes for his special dishes, such as garlic mussels, aloo gobi and lamb tikka. After that, Uddin was featured in The Stranger, Seattle Weekly and other various business journals. Chef Uddin found himself catering to high-profile business-people, such as Bill Gates who would come to eat at Mughal Palace often, and also Bob Ferguson, currently Attorney General of Washington (at that time a King County Councilmember).

After working at Mughal Palace for about nine months, Uddin went to the Sheraton Hotel as a prep cook for Sheraton Hotel in Seattle. Here, he was introduced to non-Indian cooking, and for the first time in his career, he was one of the few employees there that did not have formal culinary education.

“Whereas others spent around $60,000 to go and learn cooking, I was able to surpass expectations based on my hard work, interest and work experience by that point,” said Uddin. “In this business, the main chef is the boss. So David, who was the main chef at that time asked me to go see him. I thought I was in trouble for something, but instead he raised my pay from $9 to $10 per hour. That is a whole dollar raise and was a very big accomplishment! At that time, most other cooks at my level were making $8 an hour.”

In 1997, Uddin got married in Bangladesh, and he also opened a restaurant with the owner of Mughal Palace called Chaman Cuisine, located in one of Seattle’s trendiest neighborhoods, Capitol Hill. Uddin urged the owner to change the menu if he really wanted him to work there again. He pushed for dishes that would be more attractive to the general population. At the same time, he continued to work part time at the Sheraton.

After about four months of doing double duty at Chaman Cuisine and the Sheraton, Uddin proposed that he wanted to become 50 percent owner of the restaurant. That is when he first began his entrepreneurship. Since then, he has only grown and, despite partnership issues and changes, he became the sole owner of Bengal Tiger in 2002.

Uddin has been a hero within his family, relatives, and to over 100 people (Bengali and non-Bengali) that he has provided jobs for. His wife, Farzana Akhtar, strongly supported him and moved to the U.S. in 1998. In 2001, Uddin sponsored his mother, and she moved to Seattle. Since then, he helped close to 40 of his own family members and relatives, including his wife’s family, move to the United States to build better lives.

“They have all started working with me, and now they are all doing very well and are wealthy as well,” he said.

With the goal of offering more authentic Bangladeshi cuisine at Bengal Tiger, Uddin applied and filed for a labor certificate in 2015 to bring a chef from Bangladesh to the U.S., but he’s seeing no results.

“I am a tax-paying, hard-working U.S. citizen. In order to take my business to the next level, I applied to bring an amazing chef from Bangladesh so that we can offer even more authentic cuisine,” he said.

On October 31, 2018, Hira Miah, the Bangladeshi chef Uddin was working to hire in the U.S., went to the embassy to get a visa but has yet to get a response. “This is a very specialized skill, what he does,” said Uddin. “I just do not understand why the government has not yet gotten back to me at all. This is very frustrating, and with the immigration system changing all the time, I am not sure what else I can do.”

Along the journey of his career, Uddin faced a lot of the same barriers as other immigrants – dealing with people of different cultures and initial language barriers being two main ones. But he overcame them all and along the way even learned Spanish. He also never lost sight of learning about the value of customer service from one of his first jobs in Bellevue. He talks to everyone that comes to his restaurants and visits his customers at their tables to ensure that they are more than satisfied. He offers this business advice: “Try to do your own business, whatever it is you want to do. Do not get partners and make sure your business is based on an authentic idea.”

Uddin is also a philanthropist who wants to help care for his community and the world at large. He supported and funded the Rohingya refugee resettlement initiative and donated to victims of the Bangladeshi flood in 2004 and the Nepal earthquake. He supports non-profit humanitarian organizations such as the local chapter of Spreeha, which strives to break the cycle of poverty for underprivileged people by providing healthcare, education and skills training. More recently, he has helped build a house for an impoverished family in his hometown, Sylhet.

At Bengal Tiger, one thing that stands out, considering the chef is Bangladeshi, is that the number of Bangladeshi items on the menu is much less than the number of Indian foods. Uddin said that Bangladeshi foods are limited because it takes much longer time and more intricate spices to cook authentic Bangladeshi food. Once he has additional help from the Bangladeshi chef, he can plan on adding more dishes or change his business structure as needed.

“Bangladeshi food is extremely home-style, and if I do it full-fledged, I want to make sure that I do it right,” he said. “It’s something that could be more easily served as pick-up items or catering only, as it would take a long time to cook it right and wouldn’t do justice when it comes to customer service due to the long wait it may cause in a restaurant sit-and-dine setting. I do have a few Bangladeshi items on my menu, which I urge everyone to try.”

Chef Uddin’s favorite? “The lamb or goat bhuna,” he said, a thickened curry that he describes as “homestyle tasty goodness.”