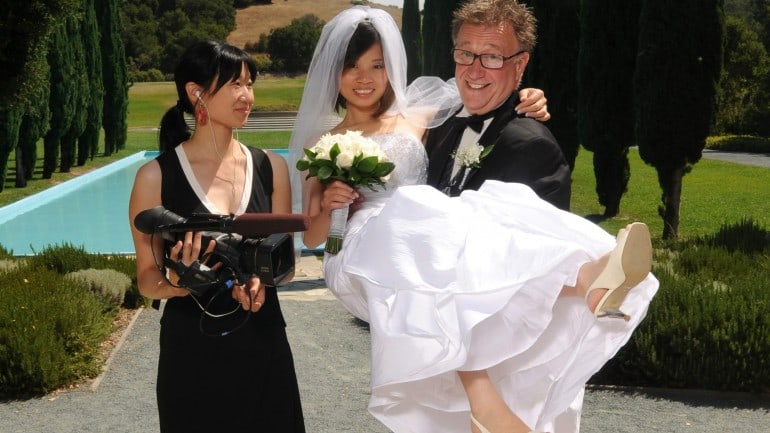 In the earliest moments of Seeking Asian Female, a documentary by Debbie Lum, we’re introduced to a montage of eager white men, each hopeful to achieve his dream of landing an exotic bride. We’re treated to priapic, lingering descriptions of straight black hair and perfect eye-folds from men with mullets and angry stares, but the focus quickly narrows to one particular man, his intended mate, and Lum herself in an honest, penetrating look at both matchmaking and filmmaking.

Steven, a San Franciscan in his 60s has been in this game a long time. We’re shown crates full of catalogues from ages past. His filing cabinets overflow with evidence from the days where the prescription for “yellow fever” was handwritten letters with foreign postmarks, and we see how the Internet has refined and focused his efforts.

He’s a fixated man. In interviews he reveals a firm belief in the stereotype of the Asian wife, man-hungry and eager to marry … and to please. There’s a wall of clocks in his home, each set, presumably, to the villages and provinces where his golden treasure waits.

We see him max out his credit cards on too-frequent flights to China, get scammed by tech-hungry teases, and enter a relationship with Sandy, a resident of Shenzhen half his age. She seems eager to wed; it’s just as he’s always envisioned.

As we learn more about them, questions and patterns develop. For her part, is Sandy fetishizing the ideal of the rich, white “daddy” from America with a house, car, and yard full of blooming flowers? Is she fooling him? Is he too broke to offer her a proper life? Are they truly in love, or is she as hooked by the mythology of America as he is with the fantasy of the “submissive” Asian wife?

All these questions and more open up in a fascinating exploration of happiness, culture shock, desperation, self-deception, and frequent, surprising moments of joy.

But Steven’s “othering” of Sandy, and Sandy’s possible idealization of Steven, aren’t the only behaviors to observe. The documentary frequently makes us ask: is Lum making fun of Steven and hoping to exploit him, or does she find herself surprised by his humanity?

We expect a certain amount of manipulation or direction in documentaries, and Lum admits and accepts this from the start of the film.

As she begins to play an increasingly vital role in Steve and Sandy’s life, she becomes as much a subject of the film as they are. She mediates in their arguments, acts as confidant, translator, and counselor, and looks inward to analyze the way she herself clings to stereotypes and ideals.

Her awareness of this and frank narration of what she’s feeling as she’s filming is what makes Seeking Asian Female transcend an afternoon episode of your favorite reality show and become something worth your attention.

Fascinating, completely human, contradictions are captured by Lum’s camera. Steven, frequently shown clumsily knocking things over, talks to Sandy like a pet or a child. Is it the language barrier, or is it that he can’t truly see her as an equal? At one point they have an explosive fight over a box of cassette tapes, and he yells at her the same way you would yell at a cat for batting something off a shelf. But he’s willing to scrape and beg his family for the money to build her the wedding of her dreams.

Sandy wavers between throwing in the towel and making it work. Is she just riding it out long enough to get a green card before she skips off, or does he really provide the kind of love and stability she needs?

Ultimately, Seeking Asian Female is about communication. Beyond the Google translation the couple needs to complete their arguments, the electronic dictionaries they use to find the perfect words, and the heartbreakingly sweet stickers Sandy creates to help her learn the names of kitchen ingredients, are the unspoken languages of desire, need, trust, and sympathy.

Lum has created a compelling portrait of three people struggling to find satisfaction in a world faced with the contradiction that the more exposure you have to something, the further away from understanding you can be. Does the ability to filter and categorize on dating sites help us find a person … or a product?

The film is beautifully edited, but when she lets the camera run, and we see them crying, laughing, and trying to figure out what they want from themselves and from one another, there are moments of transcendent human understanding.

Return of the Seattle Asian American Film Festival
Film, book carries Domingo and Viernes’ legacy to a new generation
In times of injustice, the story of Grace Lee Boggs inspires
‘R/Evolve’ questions the price of marriage equality
From bangin’ to breakin’: Documentary takes it to the streets