Seayoung Yim’s playwriting is homegrown, and her new play, Do It for Umma, will be presented here for the first time at Capitol Hill’s Annex Theatre.

Yim has been interested in theatrical interactions since childhood. “Honestly, I think it all started with me playing with Barbies as a kid. I liked dictating the story lines of their adventures in the back of my family’s convenience store,” Yim said. “This may have been my earliest dramatic work.”

Yim finds these avenues of open exploration to be very satisfying. “My writing process either starts with an interesting character or with a question I’d like to explore in a dramatic form,” she said. “It’s such a fun way to try to figure out the world, using the lens of a character’s mind.”

She combines curiosity with a bit of audacity to ferret out a larger story. “Playwriting gives me the freedom to say things on the page that I might not ever say in real life, for a reaction, and explore viewpoints that are opposite from my own,” Yim said. “I often end up with some realizations, but more interesting questions in the end.”

While still young, Yim pursued her interest in drama in a more formal fashion. “I really got into playwriting at the end of my first ACT Theater class,” she said. “To hear professional actors interpret my words for the first time was one of the most exhilarating experiences of my life.”

Yim then continued to seek out this exhilaration. “I have been studying playwriting with Stephanie Timm, who is an amazing playwright and teacher,” she said.

Once the first draft of the play was written, Yim dived into a collaborative process of revision. “I got feedback from other playwrights,” she said. “It was also developed further for a staged reading that was directed by Rachel Rene Araucto in Insatiable! Seattle’s Asian American Playwrights Festival last year.”

Yim finds this development process very helpful. “I really love the collaborative process of theater involving actors, directors, and designers,” she said. “Also, hearing and seeing an audience’s reaction to the work is the bee’s knees.”

Annex Theatre then gave Yim her next opportunity to collaborate, bringing her together with director and performer Sara Porkalob. “Pamala Mijatov, the artistic director of Annex Theatre, recommended Sara as a good match for the project,” she said. “And dang, she was right!”

Yim appreciates not only Porkalob’s artistic skills, but also her cultural knowledge. “She has an amazing analysis of race and feminism, which impressed me,” she said. “So, I knew she’d avoid easy stereotypical choices for an Asian American play and make work that is unapologetic and bold.”

Yim describes her rehearsal process with Porkalob as a partnership. “Sara has been very inclusive, and we have communicated quite a bit,” she said.

She also feels that Porkalob’s input has improved the play. “As a newer playwright, you don’t know how a work is going to be realized,” she said. “So you build into the script what you’d like to happen with the dialogue.”
Ultimately, Yim saw more of the potential in her script through Porkalob’s direction of the actors. “She really helped me make cuts that are informed by the great acting in rehearsals,” Yim said. “And the actors showed me that they can convey so much with less, and sometimes explaining too much can get in the way.”

But Porkalob and the actors helped with more than just optimizing the quantity of spoken words in the dialogue. “Both Sara and the actors made choices in rehearsals that I found surprisingly different from what I imagined in my head, but which in fact made the play stronger,” she said. “It’s been exciting to see that the possibilities for interpretation of the written word are so vast!”

Yim also appreciated the challenges that were surmounted by the team’s designers and technicians. “It’s been a great learning experience to see how the production team creatively solves problems, especially when time and money are limited,” she said.

Overall, Yim has found this production to be a positive growth experience. “Annex is the home of such interesting work and artistic risk-taking,” Yim said. “I’m grateful to have my very first full-length production there!”

Editor’s note (2/4/16 at 2:24 p.m.): A previous version of this article had mispelled Seayoung Yim’s name. The name misspelling also appeared in the February 3 print edition. The International Examiner sincerely regrets the error and offers our apologies. 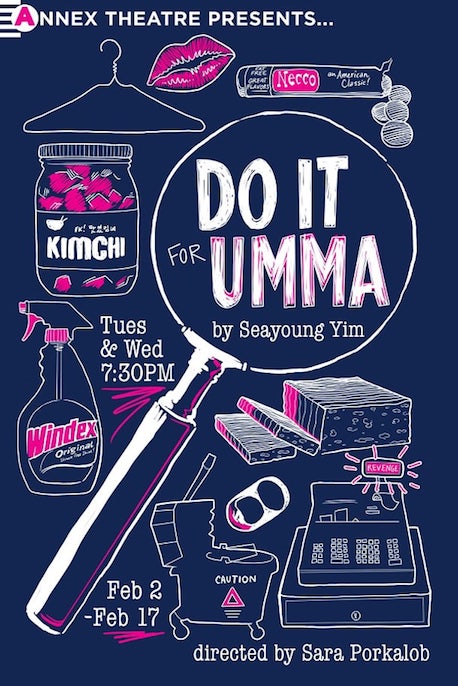