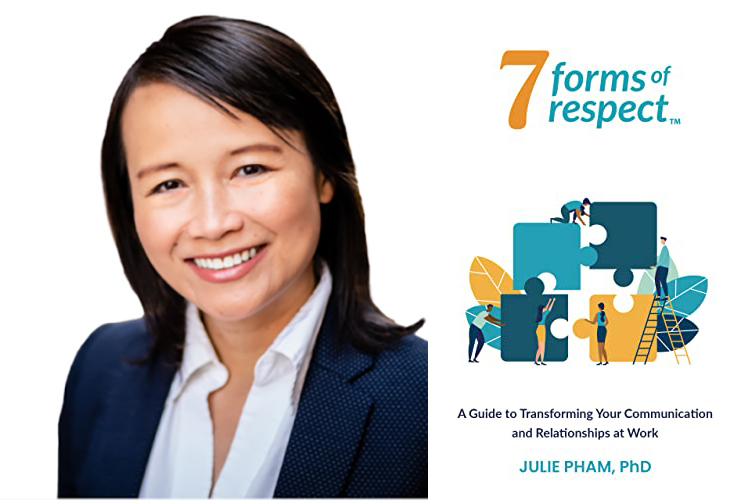 (This article was originally published in the South Seattle Emerald on August 4, 2022, and has been republished under an agreement.)

Seattle-based writer and businesswoman Julie Pham recently released a new kind of leadership and management book, 7 Forms of Respect: A Guide to Transforming Your Communication and Relationships at Work. 7 Forms of Respect derives from Pham’s own experiences with culturally relative respect, from growing up as a refugee and living abroad, as well as working in business as a Woman of Color, and it charts out how coworkers can better practice respect in the workplace.

Pham grew up in Seattle but was born in Vietnam, and her family came to the United States when she was 2 months old, as Vietnamese boat people in 1979, part of the exodus of millions of refugees from Vietnam by boat following the Vietnam War. Her parents went on to found the first independent Vietnamese language newspaper in the Pacific Northwest, Northwest Vietnamese News. Pham attended UC Berkeley as an undergraduate to study history, and then continued on to get a doctorate in history at Cambridge in the U.K. She went on to live in Germany, France, and England.

“It’s a pretty strong part of my identity, being Vietnamese, and being a Vietnamese refugee,” Pham said in an interview with the South Seattle Emerald. “And so lots of parts of the book also just talked about how we belong to multiple cultures and identities simultaneously. And having lived abroad has helped shape the way that I see respect as being relative.”

After Pham finished her doctorate, she came back to Seattle to run her family’s newspaper for three years, before moving on to become the CEO of CuriosityBased, a consulting practice focused on fostering curiosity in the workplace. She has also continued writing occasionally for newspapers, including the Emerald. But her work at CuriosityBased has heavily informed 7 Forms of Respect.

“The book is also about practicing curiosity, and the way I think about the practice of curiosity boils down to three elements,” Pham said, speaking to how curiosity and respect are linked. “[The first] is being curious about yourself, and then the second is being curious about other people and letting other people be curious about you. … And then the third part is asking questions and listening with curiosity, and then with respect, we’re just getting people to think about, where did their ideas of respect come from.”

“An analogy I like to use is that we can change the faces of the actors, but they’re reading the same scripts,” Pham said. “And so we’re used to using the same leadership narratives. And I’m a huge fan of all these leadership narratives written by white men. And I also think that there’s space for more. And that’s one of the reasons why I started my company — to advocate not just my own work, but other leadership, authors who are women and People of Color.”

Pham said that other books about respect tend to be more dictative, as if it is a 10-step process or simple plan to follow. “For me, having lived in different places, it’s like, no, respect is relative,” Pham said.

An example Pham gives is her own experience in bringing together different independent media groups. Around 2011, she formed a Pacific Northwest coalition that brought together Spanish, Chinese, American, and Russian newspapers. But there were times when she didn’t like the way she was treated by representatives of other newspapers, and realized this derived from different expectations. Pham said that when bringing together diverse stakeholders, there is a greater likelihood that there are different ways that people want to be treated. So she started asking people how they’d want to be treated. The word respect kept coming up.

“It’s like, ‘I want to be respected,’” Pham said. “What does that mean? People have different ideas of what that means. And so the idea here is that, like, respect is relative, it’s contradictory, and it’s subjective. And it’s also dynamic. [But] I think a lot of times when people talk about respect, they describe it as if it’s fixed.”

Pham’s perspectives on respect have also strongly derived from her identity as a refugee. Her parents’ degrees weren’t valid in the United States, though her dad had studied engineering. There was a lot of discrimination against refugees at the time, especially during an economic downturn. But her dad had been a journalist in the South Vietnamese military, and as they saw the Vietnamese community grow in the Pacific Northwest, they worked hard to create their newspaper.

“I’m constantly thinking about different ways of seeing,” Pham said. “[My family] was resilient, and entrepreneurial, and creative. And so it was always seen as positive to be a refugee, not something to be pitied. … Also, even studying history, it was really about studying different perspectives of events.”

Most often we hear people talk about respect as the golden rule. But Pham finds that the golden rule is no hard and fast rule. Instead, Pham introduces a different concept in 7 Forms of Respect — the rubber band rule. The rubber band rule asks what your internal breaking points are, what will make you snap, and then how you can take responsibility for learning in those areas. Like its namesake, the rubber band rule is more flexible and encourages people to consider how they personally show respect to others and how they want to be respected.

Watch Pham talk about her book in a recent interview with Tisha Held for The Seattle Public Library.

Amanda Ong (she/her) is a Chinese American writer from California. She is currently a master’s candidate at the University of Washington Museology program and graduated from Columbia University in 2020 with degrees in creative writing and ethnicity and race studies.