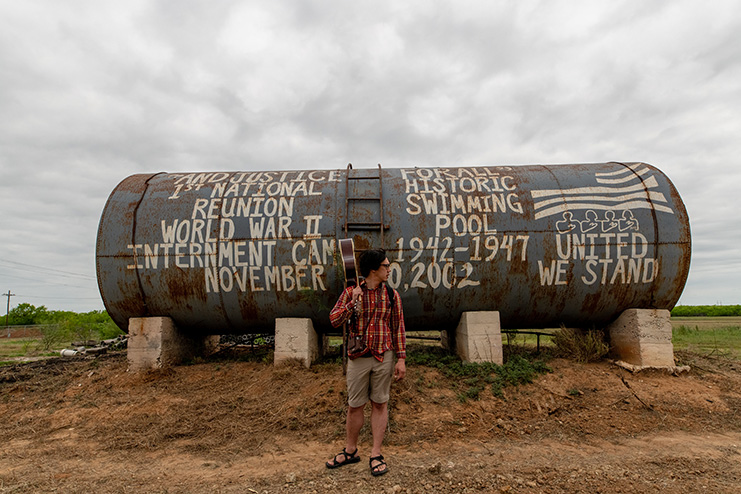 When most people start a band, you usually think of getting a call from someone responding to a bulletin board flier, auditioning someone from a Facebook group, or jamming with your buddy’s friend’s cousin’s classmate.

Julian Saporiti has been there, done that. The Nashville, Tenn., native and Portland, Ore., resident has put out music for 20 years. True to his Tennessean roots, Saporiti’s sound can be described as folk-indie Americana — with a twist. That twist? It’s Americana music that tells the story of Asian-Americans and the oppression they’ve faced over the years.

The professoral Saporiti, who identifies as mixed-race with Vietnamese and Italian parents, is singer/songwriter for No-No Boy, who will be performing in-person at Town Hall Seattle on Nov. 12, at 7:30 p.m. The event will also be streaming.

For Saporiti, No-No Boy is no ordinary band.

“The new album, ‘1975,’ is Chapter 3 of my dissertation,” he says, and jokes of defending his dissertation at Brown University: “It’s like, ‘So here’s a vinyl, y’all. Hope you have a turntable.’”

In this professor’s lab are audio effects pedals, acoustic guitars and mobile recording gear. Consider “1975” the only Ivy League PhD dissertation you’ll ever be able to sing along to.

“Using history to illustrate when people have been oppressed or when underdogs have kind of been stamped out, or when there’s been immense complication — those are moments that I want to use songs to be able to go to a public library or a bar or a high school” as venues to tell the story, he says in a recent interview with the Examiner.

“I feel a responsibility to be a good teacher, to be a good professor,” he said. “I’ve just chosen recently to teach outside of the classroom, to use a very ancient way of teaching. It was good for Homer with the Odyssey and the Iliad to sing history, because it allows me to track.”

The term No-No Boy refers to those Japanese folks who were detained at incarceration camps in the 1940s and who refused to answer affirmatively to a government demanding that they serve in the armed forces and swear loyalty to the United States.

Saporiti tells an authentic and transparent story that pulls no punches about the Asian-American experience, whether it’s taking on colonialism in song with “Imperial Twist,” or calling out appropriation in “St. Denis or Bangkok, from a Hotel Balcony”:

In “The Best God Damn Band in Wyoming,” Saporiti elegantly tells the story of Japanese incarceration, but through the lens of the art that came of it. “Under machine guns they dance behind barbed wire,” he sings in celebratory style about the George Igawa Orchestra, an all-Asian-American big band who formed in a Wyoming concentration camp during World War II.

“How don’t we all know that story, right?” he said. “Why is it not a movie? Why is it not a novel? It was just really inspiring. I don’t want to minimalize the trauma of war or incarceration at all. But what is the added meaning of forming a band in those circumstances?”

In an interview, Saporiti speaks at length about using “lyrics as Trojan Horses,” a cultural identity that begins with calling himself a songwriter first, and the perils of serving as a spokesperson for the Asian-American experience.

IE: How pumped are you to be playing Town Hall in Seattle?

I’m hoping that the pandemic didn’t shut down this one pho restaurant that’s in the Little Saigon/Japantown, it’s like right on a corner. I don’t know what it’s called, but it was some of the best pho I’ve had — but that’s every pho restaurant I go to.

So typical basic Asian boy answers, right? I’m stoked about eating some food and nerdy stuff, but yeah, I love Seattle. I’m really excited about your NHL team. I’ve always wanted to say, “Unleash the kraken.” So I feel like I’ll be able to go to a game and say that with 20,000 people. But, as far as the show goes, it’s gonna be I think the third show that we’ve done.

IE: What’s it like releasing music during the pandemic?

JS: It was this really weird sensation of putting out an album that has gotten more good press than any record I’ve put out in my almost 20-year career putting stuff out. But I’ve seen no one. I got sent this magazine that they did a big feature on the project and it almost feels fake, like a prop, because we haven’t had any in-person response.

So I’m just excited for whoever wants to mask on up and come out. We’ve done a couple shows and it’s been really life-affirming. You kind of forget that moment, like, there’s just something that happens. You can listen to all the records in the world, but being there with someone in a room while they manipulate air molecules to create music is f***ing insane.

It’s alchemy. And I miss that. And when people are playing a song that makes you think, and you’re there with them and they’re combining that with melody and harmony, it just does something. So I’m looking forward to giving that to people again, which is like probably the only real important part of being a musician is just like that process — making that sonic gold together.

IE: It must be sort of a sterile feeling to put this out, but not be able to have it validated by actual breathing live people.

JS: Yeah. It’s weird, because it’s just all algorithms and numbers. The marketing guy will say, “We got on this radio station and this radio station,” and it’s like, what does that mean? Like even we did a thing with KEXP, and that’s one of the YouTube channels I watch religiously because they have so many good bands come on.

So to be able to have the honor of doing that (remotely), but not go to the (KEXP) studio, you know, where you’ve seen all these people record. It’s like, again — is this even real? If it only happens on Zoom, does it really happen? I’m beginning to think, no.

It’s a weird feeling. What does it mean for however many thousands of listens you get on Spotify? You know, like one sitting-down with 12 people in the living room and playing guitar is more meaningful than 10,000 plays on some streaming network.

IE: A Pitchfork headline you were quoted in asks, “What is Asian-American music really?” I’d be curious to hear more on your take, as someone with an Asian-American identity that leads with that in your music.

JS: I like to, one, specify that I can see how people can call my music Asian-American all they want, but don’t lump me in with West Coast Asians or people of Asian descent in Hawaii, or people from New York City Chinatown … very different cultures.

And we reduce ourselves to Chinese massacres, railroad stuff, Japanese internment, annexation of Hawaii, Vietnam war, and then, like, fun sushi. It’s like super f***ing basic. And a lot of what I try to do is complicate it. So I will say that, while I do lead with subject matter that is Asian American, it’s more so because I’m a folk singer, I’m a songwriter, and these songs just haven’t really been written. They come from the research that I do as a PhD student.

IE: In your storytelling, how do you hold the responsibility to be almost this ambassador of the Asian-American experience?

JS: A big part of what I do is like going to, you know, rural Wyoming, where I lived for so long and singing songs as this sort of Trojan Horse to get in and sort of say, “Hey man, in your state, some really f***ed-up s*** happened.”

But in order to do this, there was incarceration camps and reservations that still linger. So I guess the message is, let’s learn our history. Let’s take ownership of our difficult histories, but let’s do it with a song.

As far as the responsibility for any kind of cultural identity, I think studying Asian-American and interviewing so many people who have been through stuff like war, genocide, internment camps, migrants today coming over the border — all the stuff that makes up this huge 70-song project that I’ve done. It’s made me less and less like, “I understand what Asian-American is.”

It’s given me more sympathy for the underdog, for the poor, for the working class, for anyone who isn’t getting a fair shake, because that’s what I studied. I studied people being displaced by war, being exploited for their labor, not being allowed their humanity when they try to come to a country that supposedly is built upon freedom.

You don’t have to be a political person to stick up for the underdog or the oppressed.

No-No Boy will be performing in-person at Town Hall Seattle on Nov. 12, at 7:30 p.m. The event will also be streaming. To purchase tickets, visit https://bit.ly/2Y42k0X.