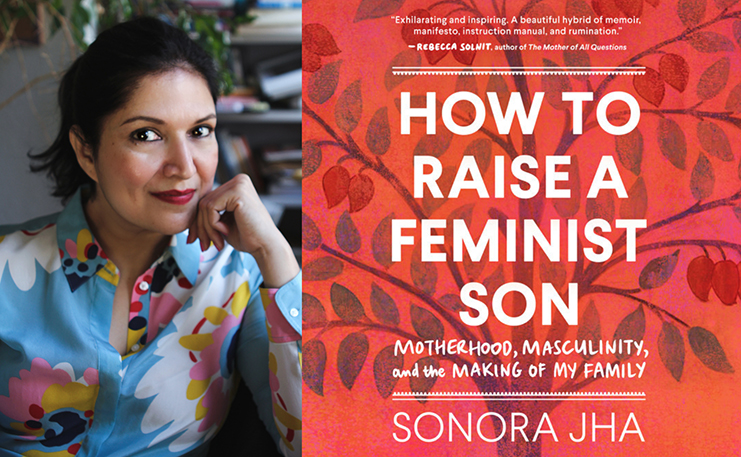 Sonora Jha’s memoir and feminist manifesto, How to Raise a Feminist Son: Motherhood, Masculinity and the Making of My Family, compels the reader to reflect on parenting, social perceptions of gender, and to take on the hard task of raising feminist men. A South Asian American academic and writer, Jha has been my colleague at Seattle University for more than 15 years. A professor in the Communications department, she is the author of the novel Foreign (2013) and teaches classes at Hugo House, Hedgebrook and Seattle Public Library.

Jha writes about being a single parent, and in her opening pages asks if she and her son would be considered a family. She writes “I know the answer to that question and it is no. I don’t even call our single-mother-and-only child unit a family.”

In this powerful book, she goes on to tell us how she raised her feminist son by immersing him in Bollywood and Hollywood cinema and other media from infancy. Mother and son bonded over film and built their relationship through stories. Recognizing that film and media are replete with misogynistic messages, Jha embarks on using film and discussions about films as a means of developing her son’s feminist consciousness.

As a media studies scholar, she reflects on how she engages the child in critical thinking about what he consumes on screen and page. Watching The Jungle Book with a young child, she asks him why that film had only one female character (Kaa the snake) who was sly while the rest were men. As he grew older, they discussed the Bechdel test, and later critiqued video games like Grand Theft Auto.

Written in 13 chapters with each one focused on a provocative question such as “Has Mother Goose ever Heard of Feminism?” or “Do I really have to Talk to Him about Sex?”, Jha takes us through major issues that confront parents, especially single mothers, committed to raising their sons as feminists including how they might stumble or fail and be riddled with self-doubt at various points. Each chapter ends with a “To Do” list for the reader, which are reflection questions for us to explore our feminism, media literacy, and parenting philosophy.

Woven through these chapters is Jha’s life story of growing up in Mumbai, having polio as a young child and dealing with the associated stigma, witnessing her father’s abuse of her mother, her own experiences with sexual violence and sexual harassment, her brother’s violence against her, and her two marriages that end in divorce. She does not spare us details and draws the reader into her story while also sharply critiquing class, caste, religion, and patriarchy in India and race, class, gender, and patriarchy in the United States. Her intersectional lens demonstrates her commitment to equity and justice. The narrative shows her courage and tenacity as she navigates the impact of a major auto accident that led to several ankle surgeries, the community of friends who helped her through that crisis and formed her feminist village as she raised her son, and the relationship with her sister that sustained her through tough times.

Jha writes lucidly and her insights into feminism combine personal experience with deep reading and scholarly research. Her wicked sense of humor and sharp analysis shine when she takes apart Hindu myths that perpetuate patriarchy. Her reading of Shiva and Parvati’s sexual desire and romance humanize the mythology that most of us raised Hindu grew up with. Her narrative will resonate with many South Asians, and it will speak to readers beyond the South Asian community as well.

The title may suggest this is a book for women raising sons, but men should also read this. It offers provocative insights into masculinity, feminism, parenting and immigrant identities. The narrative’s mixture of critical feminist analysis and powerful stories told with an engaging and honest voice will leave you thinking and re-examining your world for days.

Sonora Jha will be in conversation with author Ijeoma Oluo at Town Hall on April 7 (a virtual event). On April 19, she will be speaking with Nalini Iyer and Theresa Earenfight at Seattle University on “Memoir, Migration, and Masculinity” at 6 PM (virtual). Event is free and open to the public. Register at HowToRaiseAFeministSon.eventbrite.com for a Zoom link.