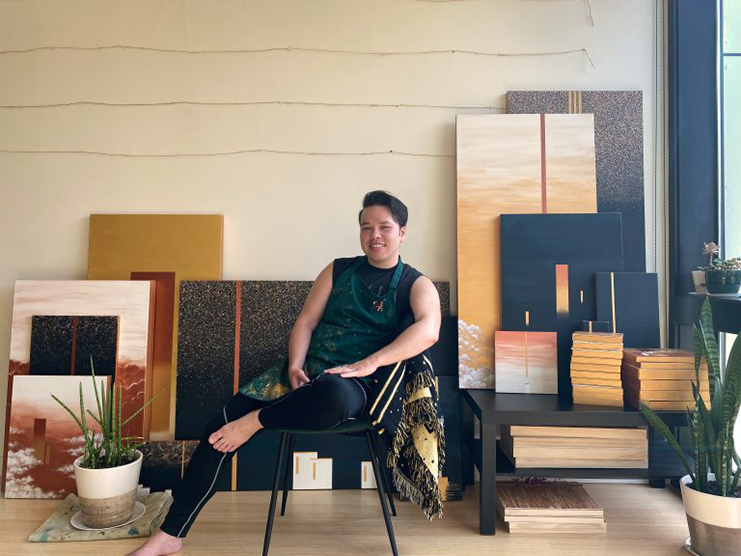 Back in January, these pages highlighted the Seattle Restored program, and now, we’re revisiting the program for a year-end update. The locations of Seattle Restored participants, as well as the supporting team itself, both have expanded, to the satisfaction of those involved.

The original impetus of the Seattle Restored project was to revitalize Seattle neighborhoods that had emptied out due to the lockdowns associated with the Covid-19 pandemic. To fill vacant storefronts, the city of Seattle first allocated the Coronavirus Local Fiscal Recovery Fund (CLFR) established under the American Rescue Plan, and now is funding the program through general city funds. This funding brings together artists and property owners, providing places to create and display artistic work while filling the holes in dozens of physical properties – as well as in the fiscal balance sheets of their owners.

Shunpike Program Manager Martin Tran helps lead the team that makes Seattle Restored possible. “The most rewarding aspect of the Seattle Restored project is helping artists and entrepreneurs find opportunities where they normally wouldn’t,” Tran said. “We’ve helped local Black-owned businesses set up shop in the downtown corridor. We’ve placed street-facing art exhibits across the city in unexpected places. And we get to cut them a check to do it.”

To ensure that the Seattle Restored program best served the artists most appropriate to its mission, writer, curator, and consultant SuJ’n Chon served as a Phase 1 Application Review Panelist. “Showing our local talent through the activation of empty storefront and exhibit space isn’t just a feel-good affair; it makes civic sense,” Chon said. “Not only does it get more eyes on the creations of our artists and creative entrepreneurs, it gets more eyes on the environment around it.”

Current artists included in the program include River, flower flower, Seattle Restored Market, Lockdown Vista, The Calling, The Self Care Square, the Beacon studio, Picnic Party’s Downtown Pop-up, and Degenerate Art Ensemble, among many others.

The window art display Lockdown Vista on Fourth Avenue is an art installation exhibiting three large paintings from artist Soo Hong’s Dream Walk series. “I am attracted to window displays from department stores to cafes,” Hong said. “It feels like a portal to an intimate or a dream space.”

As Hong notes on her Seattle Restored listing, she spent a lot of time walking in nature during the Covid-19 pandemic, and wanted to combine that experience with an exploration of Edvard Munch’s concept of “inner pictures of the soul.” She said, “I was able to recognize my emotional and physical changes within nature.”

After Hong’s proposal was selected, she selected three paintings that were influenced by Mongyudowondo, Dream Journey to the Peach Blossom Land. “It was painted by Korean painter Ahn Gyeon in the 15th century,” Hong described. “Prince Anpyung dreamed about traveling paradise and ordered Ahn Gyeon to paint his dream landscape.”

Her paintings include a rainbow full of colors with the minutiae of tiny shapes, blurring like waves to create a fantastical vision that borders on hallucination. Hong’s abstract style evokes fairies, flowers, and the color of the energies of the universe if they were visible to the human eye.

She has also connected with viewers. “This program gave me great opportunities to connect with the public and show my work with a wider audience,” she reported. “I received a lot of messages and photos from viewers which truly felt like someone said, the viewer completes the work.”

Another window display on Third Avenue in Belltown is The Calling, by artist Jay Stoneking. “Over the pandemic, I started my minimalist art series as an escape from my everyday into the quiet corners of my imagination,” Stoneking said. “I built up a small collection of works exploring these dreamy, ethereal spaces, and at the start of this year, began pursuing ways to establish myself as an emerging artist in the city.”

Even though this was Stoneking’s first time applying to participate in an arts program, he found the process straight-forward. “The program reached out to let me know I’d made it to the next stage where they match artists and makers with potential locations,” he said.

“At the start of the summer, one particular location expressed interest in exhibiting my artwork. I worked closely with a project manager from Seattle Restored and folks from the building management company to create and set up the installation for their particular space.”

Stoneking reports reaching an entirely new audience with his creation of a magical invitation through some kind of portal to another fantastical place. “People have reached out to me expressing how much they appreciate seeing my art in a space that felt otherwise neglected,” he said. “Occasionally I’ll get little videos and pictures of the installation from someone’s bus ride, and it’s a ton of fun to see how people engage with my art even in passing glances.”

And this is just the beginning, as new art works call to him from the depths of his dreams. “My installation will be evolving and growing into the coming year as they have invited me to expand into additional space to share more of my work,” Stoneking said. “It’s great to know there’s real investment into local artists, as well as the city itself, through the Seattle Restored program.”

A much larger space on Third Avenue is dedicated to the Art Bank, utilized by performance group Degenerate Art Ensemble. “Space is absolutely everything when it comes to the kind of work we do,” said Joshua Kohl, the group’s Creative Producer, as well as its composer and music director. “Rehearsing, building sets, testing video projections, having meetings, and generally just having a place to call your creative home.”

Kohl reports that the Seattle Restored project wildly exceeded the expectation of himself and his creative partner, Artistic Director Haruko Crow Nishimura. “We had asked Seattle Restored for a 1000-square-foot space that we could use for experimentation and they found us a 7000-foot space,” he reported. “It is absolutely unimaginable in any other time in this city.”

DAE emphasize how fortunate they feel as a result of this program. “We are currently working on a brand-new project and we were looking for somewhere to build installations for video production, among other things,” Kohl said. “We have been developing a really good relationship with the property management company, and even their leasing board have been thrilled with seeing life come back to the windows of their building.”

Now, the DAE team is working on logistics like heating, ahead of their next public performance after the first of the new year. “We are very much looking forward to sharing our space with the public on January 14 for the first time,” Kohl said. “We are only guaranteed the space through the end of January, but hopefully it will be extended, and we have been told that it is likely.”

Kohl is a strong proponent of the entire initiative. “I am truly impressed and honestly mind blown by what Shunpike and the Seattle Restored program has accomplished already,” he enthused. “They are truly taking a unique time in history where our downtown is 60 percent empty and giving artists and small business people the opportunity to bring life back.”

He acknowledges that Seattle has not completely rebounded, and hopes that Seattle Restored is part of the solution. “There is a whole lot of suffering on the streets downtown these days,” he said, “and we hope in some tiny way that our art might bring at least a small amount of joy to people who see it walking by.”

Yet another Seattle Restored space that has been activated with energy and performance has been The Beacon on Rainier Avenue in Little Saigon. Now the home of the World Champion Dance Crew Massive Monkees, The Beacon offers a safe and fun place not only for these artists to develop their work, but also for the public to experience Hip Hop Culture. Through an ongoing partnership with Shunpike, an arts support organization that provides consulting and fiscal sponsorship, The Beacon also offers a free youth after-school program, dance and music classes, and community events.

The Seattle Restored program, for Chon, helps increased the level of community and caring in central Seattle. “It was a privilege to be able to help curate Phase I projects,” she said. “I only wish we had enough available storefront space to select more proposals.”