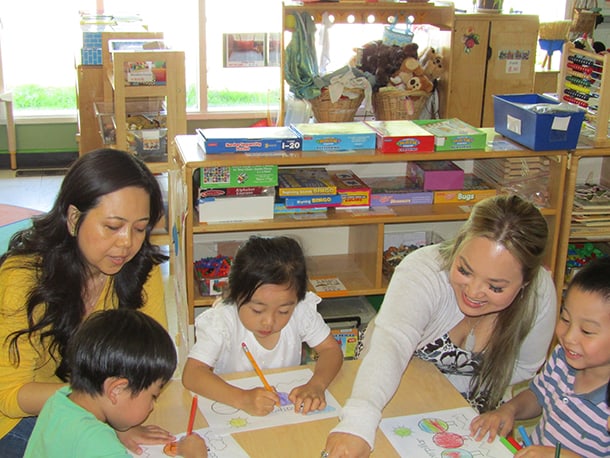 In 2014, Seattle passed the Seattle Preschool Program (SPP) Levy of $58 million over four years, allowing the implementation of a four-year pilot program, to pursue its goal of providing high-quality preschool for 2,000 children. Now in entering its third year, the program will have 37 sites, 13 providers, and will enroll approximately 1,000 children. The program recently received high praise from Mayor Ed Murray, despite growing pains over meeting higher costs for providers. Enrollment for its third year began mid-March, and there is already a wait list. Families of four making under $73,800 have free tuition for their eligible three- and four-year olds. Higher-income families will pay a sliding scale fee.

Leilani Dela Cruz, Operations Manager of Early Learning for SPP, stressed that the pilot program is “equity” based, focused on reaching a diverse population through many different locations and providers to bring kindergarten success to all children.  Day care centers, preschools, community centers, as well as the public schools are just some of the locations SPP is targeting. Research shows all children benefit from attendance at mixed income classrooms, Dela Cruz said.

SPP is also implementing a pilot program in family child care homes. “We want to go where the children are.” Dela Cruz stated. This culture-appropriate approach, according to Dela Cruz, is unique to Seattle’s plan. She said no other city is currently showing this type of innovation.

Dela Cruz said many immigrant families prefer to have their children schooled by a neighbor in their own home who speaks their native language. Through the SPP, these family child care homes will be supported to participate in the Washington State Early Achievers Program.

How does the SPP bring higher quality to preschool? Susan Lee, director of operations at the REWA Early Learning Center at Beacon Hill, said the SPP offers scholarship money to help with continuing education for its teachers, as well as consistent coaching and feedback about how teachers are doing. SPP also provides for special education assistance within the classrooms of children who need it. This fall will be the Beacon Hill center’s second year with SPP and there are two SPP classrooms. Lee said an additional classroom will be added.

What if you have a three-year-old waiting for an SPP slot? Lee said that this upcoming year, parents can have their toddler “grandfathered in.” She said if the three-year-old already attends a center where SPP is provided, parents can simply request continuity of care for their child at the same center.

For Lee, a concern is that there are still not enough hours in the day for child care assistance. Frantic parents, though grateful for the Monday through Friday, 9:00 a.m. to 3:00 p.m. care with SPP, still face paying for additional child care after 3:00 p.m.  Lee said her center does offer before and after school care, but for a fee.  She commented that working parents would benefit with eight-hour preschool every weekday, and hopes additional SPP funding can provide this in the future. She also indicated that there has been a disparity in salaries between teachers and directors. At one point, Lee said she encouraged one of her administrators to go back to the classroom where she could earn more money.

At present, Lee said her bilingual center serves a total of 102 children, teaching Chinese, Vietnamese, English, as well as a number of different Chinese dialects. She said this is especially important to note, since 90 percent of her teaching staff are immigrants and can communicate a child’s difficulties more effectively to parents, other staff, and administration. If a child does need special education support, the process will happen faster than within a single-language classroom.

Lee said she is excited to be a provider for two new SPP sites that will open in 2019.  She said that the Low Income Housing Institute (LIHI) plans to create a preschool within their low -income complex in Lake City, providing four classrooms serving 80 preschoolers. SPP is financing the project. Also on the horizon is an expansion into preschool at the ReWA site on Martin Luther King.  At present, infant to two-year-old care is provided, but she said by 2019, three preschool classrooms will be open. SPP has given $500,000 toward its completion.

Hueiling Chan, director of the bilingual preschool for the Chinese Information and Services Center, said that the collaborative spirit of the pilot program allows centers to share and learn from one another, instead of competing. This fall, Chan will oversee a new SPP site at the Yesler community center. Chan said that Yesler is one of four community centers that is offering the SPP opportunity, made possible through the City of Seattle and its Parks and Recreation Department. The Yesler classroom will offer both Mandarin and English.

Gloria Hodge, Director of the Hoa Mai Preschool, a bilingual Vietnamese immersion center, said the school celebrated its one-year anniversary in December, and that it couldn’t have happened without the help of the SPP.

“Partnering with the Seattle Preschool Program has provided so many benefits for our teachers and children through observation, coaching, data collection and assessment,” she said. “It has helped us grow and become more effective as Early Learning Professionals. It is important for the Seattle Community to know the impact it has made through the Family and Education Levy.”