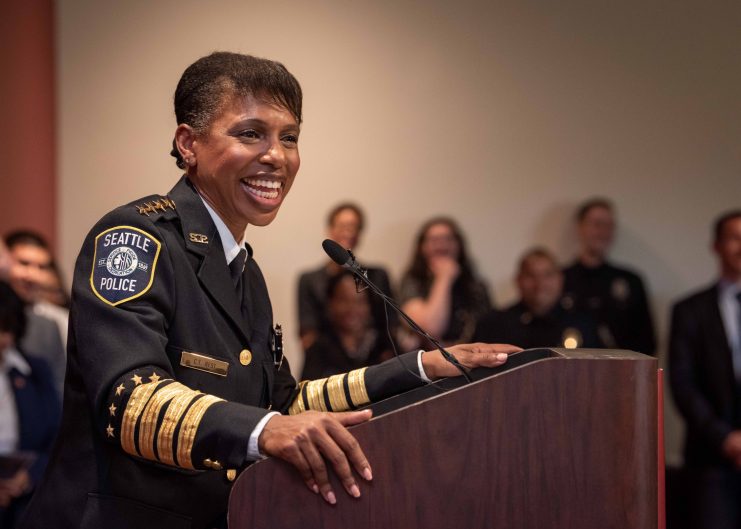 Seattle Chief of Police Carmen Best is leaving the department at the beginning of September, she announced today. Mayor Jenny Durkan has appointed Deputy Chief Adrian Diaz as interim Police Chief pending the start of a search for a new Police Chief.

News of Best’s retirement was reported on Monday night by Dori Monson at KIRO radio and by Q13 reporter Brandi Kruse on Twitter, hours after the City Council passed legislation to cut the police department’s budget in 2020.

The first Black woman to serve as police chief in Seattle, Best was appointed by Mayor Durkan in 2018, and headed the department for about 18 months. She was initially passed over in a nationwide search for a new chief after Kathleen O’Toole left the department, but after backlash from community members and officers, Durkan reconsidered and appointed her chief. Best, who was born in Tacoma and served in the Army before being trained as a Police Officer, worked in SPD for 28 years in a variety of roles, including as deputy chief under O’Toole.

In an announcement to officers, Best did not give a reason for her departure, saying it was a difficult decision, “but when it’s time, it’s time.” But Mayor Durkan, in her message to officers, suggested the departure was related to City Council actions to defund SPD: “I regret deeply that she concluded that the best way to serve the city and help the department was a change in leadership, in the hope that would change the dynamics to move forward with the City Council,” Durkan wrote.

In a statement, Mayor Durkan credited Best with leading Seattle “forward to truly reimagine policing.” She called Best’s retirement a “significant loss” for Seattle. “I hope that going forward, all of Seattle can engage in hard and necessary conversations about policing and community safety and that we can do so from a place of mutual respect – even when we disagree,” Durkan said.

Best’s resignation follows months of debate over how to reform or reimagine the SPD following citywide protests calling for an end to systemic racism and police brutality after the murder of George Floyd by Minneapolis police.

During the demonstrations, Best was criticized by activists and City Council members for allowing police to use tear gas, blast balls and other “non-lethal” weapons on protesters. On Monday, the City agreed with a court order preventing police from targeting journalists, medics and legal observers with such weapons, the Seattle Times reported. Lawyers for protesters alleged that police used unnecessary force to control crowds.

Following the demonstrations, City Council launched an “inquest” into the Police Department budget, with a majority willing to cut funding for the department while making adjustments to the 2020 budget, a process initiated to account for the impacts of the COVID-19 pandemic.

After seven Council members  — a veto-proof majority — agreed with a plan from Black-led organizations King County Equity Now and Decriminalize Seattle to cut the department by 50 percent, Councilmembers eventually hammered out plans to make cuts in 2020. While the cuts represented a roughly 7 percent reduction in the 2020 police budget — far less than 50 percent — Council members pledged to make further cuts for 2021 and beyond once budget deliberations begin.

The cuts include a reduction of about 100 police staff, and cuts to the salaries of command staff, including a cut to Best’s pay, from $294,000 to $275,000 per year. “I was offended that they would even suggest that my command staff take a salary cut,” Best said during the Tuesday press conference announcing her resignation, independent journalist Erica C. Barnett reported. “To even consider not compensating them fairly was ridiculous.”

Diaz, the interim chief, has worked in the department for over 20 years. His appointment does not require confirmation from the City Council. “My commitment will be to ensure the Seattle Police Department provides equitable justice for all,” Diaz said in a statement.