Six outrigger canoe paddlers lean forward, extend their arms, and plunge their feather-light wooden paddles into the water propelling their canoe forward—not as the sun sets in front of Diamond Head on the south shore of O‘ahu, but as the sun rises on Lake Union near downtown Seattle.

These paddlers are members of the Seattle Outrigger Canoe Club (SOCC). Club members are currently training for their winter race series. These races are for paddlers in one-man and two-man canoes. Paddlers ignore cold winter weather conditions and paddle early in the morning or late into the night to train for these races.

Six-man canoe paddlers will soon begin to increase the number of practices per week to prepare for the first race of the six-man race season, which is held in April.

Founded in 1996, the SOCC teaches both Hawaiian paddling techniques and Hawaiian culture to Seattle residents.

The SOCC is part of a larger organization called the Outrigger Canoe Racing Association of the Pacific Northwest, explained Sabine Jessel, the women’s head coach. This is an organization that brings together outrigger canoe clubs from Washington, Oregon, and British Columbia for races throughout the spring and summer.

“It takes a certain type of person to pull yourself out of bed early in the morning to go paddle when it’s 32 degrees out, but its worth it once you’re on the water,” Jessel said.

Jessel described paddling in Seattle as a unique opportunity because of all of the things you see when you’re paddling, including anything from bald eagles to the downtown skyline.

Paddling was an integral part of life for Native Hawaiians before settlers arrived to the islands in the 1700s, according to Paul Vanzwalenburg, a former vice president and current paddler for SOCC. They used them to travel long distances as well as for offshore fishing. Today, Paddling is both competitive and recreational. Outrigger canoes are different from typical canoes seen on the mainland because they have a floating outrigger or ama on the left side of the boat. They can have one, two, or six paddlers.

The paddler in each seat of the boat has his own job, the same way each player on a soccer field has a different position, Vanzwalenburg explained.

The first and second seats in the boat set the pace for how fast the team paddles. They try to paddle perfectly in sync because that’s the most efficient way to move through the water. The third and fourth seats are the “power seats,” the engine of the boat. These paddlers will generally be the strongest in the boat and are responsible for pushing the boat forward as much as possible. The fifth seat is another power seat, and also helps the steersman out when the water gets rough. The sixth seat is the steersman who navigates the boat through the water.

The SOCC attracts a variety of different paddlers, Vanzwalenburg said. Ages range from people in their early 20s to people over 60. Some members have competed in the World Sprint Championships against some of the best teams around the globe, while other members just come out to practice for fun and exercise. Many members are from Hawai‘i or have a connection to Hawai‘i. Others are Pacific Northwesterners who wanted to try a new watersport.

There is a big focus on Hawaiian culture at their club, according to Josie Sarks, an assistant coach at the SOCC.

“Hawaiian culture is very much alive among paddlers, whether they are Hawaiian by ancestry or Hawaiian at heart,” Sarks said.

She explained that at their club they practice principles important to the Hawaiian culture such as respect for the land, for each other, and for the canoe they paddle in. Paddlers respect the land and ocean by always picking up trash out on the water when they find it. They respect their canoe by regarding it as their seventh team member. They hold a blessing ceremony whenever they get a new canoe. Paddlers also never step over the top of one of their canoes because that is considered disrespectful.

Paddlers embrace the Hawaiian concept, “E komo mai,” which means, “Come in, welcome!” They encourage new members to come out and paddle whether they’ve been doing it for years or have never been in a canoe.

Paddlers also use many Hawaiian words when paddling, according to Jessel. They use the Hawaiian word for outrigger, ama, and call many other parts of the boat by their Hawaiian names. Steersmen also use common Hawaiian phrases when talking to the crew in the boat, such as saying “Māukaukau?” Which means, “Are you ready?” before they start to paddle.

Sarks describes the paddling community in the Pacific Northwest as a tight-knit group. She says that even though the various clubs are competing against each other, they share a common bond that brings all of them together.

“This sport embodies the spirit of ‘ohana, of family,” Sarks said. “It’s like a tight beautiful thread that runs through each club and makes up one beautiful cloth that creates a family.” 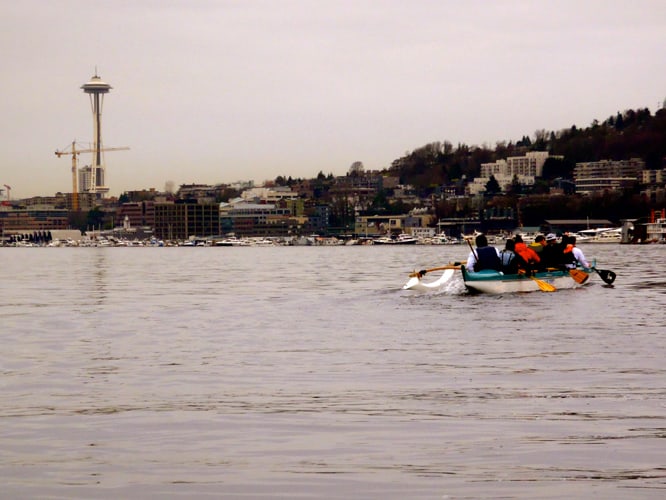