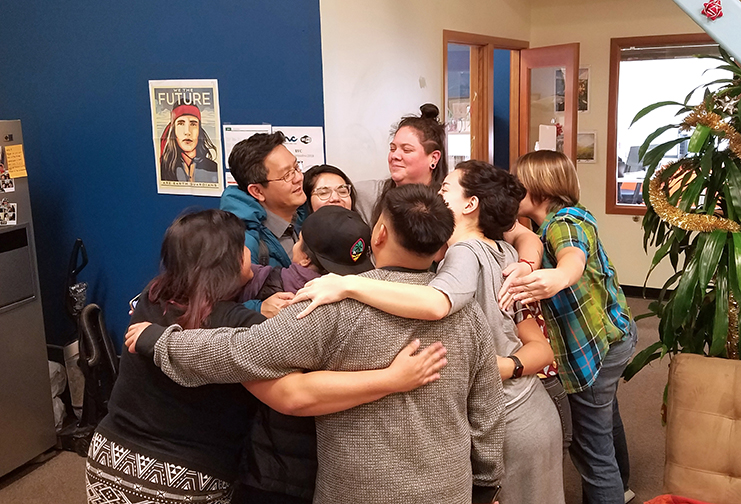 Vu Le is about to get roasted and he admits he’s more than a little nervous.

“I am honestly slightly terrified,” said Le. “This team does not hold back!”

The team Le is referring to is the men and women behind RVC, a Seattle non-profit formerly known as Rainier Valley Corps that Le launched in 2014 with a full time staff of 1, himself. His goal was to promote social justice by developing leaders of color and strengthening organizations run by communities of color.

“RVC started with a focus on leadership,” said Le. It has shifted to include something critical: The building of community power, which is necessary to address systemic injustice. I’m really excited about that.”

Despite the growth of his non-profit (which included a current full time staff of 20 and a new office in Chinatown/International District), Le recently decided to step down from his position as Executive Director. On February 22nd, his former colleagues will be throwing him a roast which will also serve as the biggest fundraiser ever for RVC. Le told us, while he’s looking forward to a fun and light hearted evening with friends, more importantly, he hopes the event will raise as much money as possible for an organization he still deeply cares about.

“I am so grateful to have had a chance to work with this brilliant group of leaders, both staff and board, as well as our volunteers, donors, and funders,” said Le.

But the problem according to Le is that donors and funders can still be very difficult to convince to help non profit organization, especially those run by people of color.
And that is leading to exhaustion and burnout for many POC’s non-profit leaders, including himself.

“Many of us are still not taken seriously when we ask for grants,” said Le. “The biggest grants are not going to communities of color. We have been trained to just be grateful for any tiny amount of money we get. We need to have more audacity and ammunition to ask for more money. There are so many brilliant organizations out there that deserve this.”

For April Nishimura, RVC’s Director of Capacity Building, she said it’s been inspiring to watch how Le (whom she refers to as a “super star” in the non profit world ) took on that challenge of asking for money for non profits. She said Le has a certain candor that makes funders listen and want to help.

“Vu is very honest and that’s been special about him as a leader,” said Nishimura. “He’s been able to articulate why you need to fund POC’s non-profits and he’s not afraid to say this is one way to fight systemic injustice.”

Among the dozens of non-profits RVC currently partners with is the “Somali Parents Education Board”. It’s a grassroots organization working to close education gaps experienced by Somali and other families of color in South King County. RVC provides the group with everything from capacity building to operational support so leaders can focus on their mission based work.

“One thing that I love about Vu is he is very candid about holding funders accountable,” said Regina Elmi, the SPE Board’s co-founder and executive director. “There’s no sugar coating. He would show them why we deserve the money we need and they can’t give us breadcrumbs. Having RVC as a partner means, I can now focus on things like relationship building. As a community advocacy group, every minute of the day matters for us.”

Recent national research shows less than 10% of nonprofit chief executives and less than 20% of non profit employees are people of color.  But Le said he remains optimistic that things will change as long as big corporate players get in the game as well.

“This is a serious problem for the sector,” Le recently wrote in an article in his blog “NonprofitAF”. “The attrition of POC leaders is an urgent issue we’ve been ignoring, and it will have serious implications for the sector. All of us need to pay attention to these issues, especially funders.”

That weekly popular blog, “NonprofitAF”, has also been a place where Le has shared conversations and frustrations about the challenges facing the non-profit world. But it’s also where he has talked about its many successes as well.

“One of the biggest accomplishments of RVC is expanding our mission to include the operating support program and changing the way we think about capacity building,” said Le.

Le said he can’t take all the credit and his team is the reason why RVC has grown to what it is today. He said he looks forward to seeing where this non profit will go next.

As for his immediate future, Le plans to stay busy being a speaker, blogger, and also a dad to his 2 young sons, age 6 and 3.

“I just need a break to spend time with my family,” said Le. “And I encourage others in our sector to take breaks when they can. Our sector and world need you for the long haul.”

Vu’s Vegan Roast is happening Saturday February 22nd at the Seattle Aquarium. For more information about tickets and the event: https://rvcseattle.org/vegan-roast/