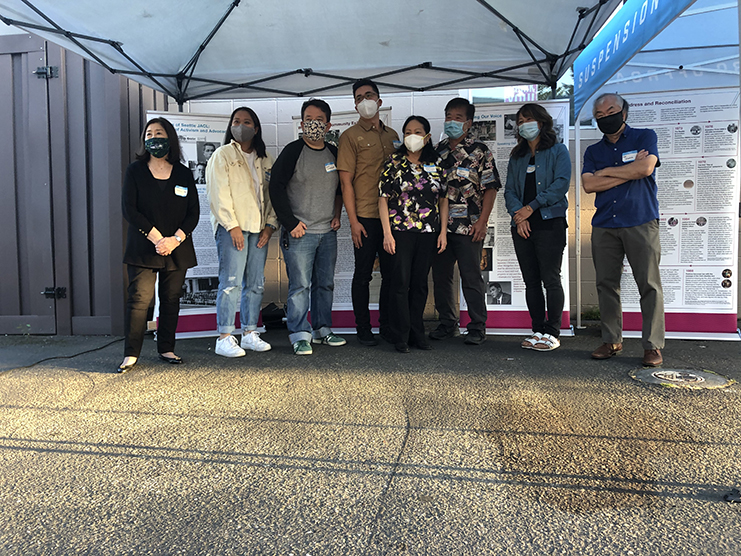 Seattle Japanese-American Citizens League (JACL) gathered together on Friday, August 27 for the first time since the start of the COVID-19 pandemic to celebrate their 100-year anniversary as the oldest civil rights organization in the country. To commemorate the efforts of generations before, the organization unveiled their newest collaborative project at Terry’s Kitchen in Bellevue — a series of panels detailing past Seattle JACL’s history, accomplishments and leaders.

Led by legacy project committee chair Bill Tashima, the series took months of collaboration between generations of Seattle JACL members. The panels, portable for different events, display key moments in JACL Seattle’s history — the organization, however, wanted their commemoration to be more than just a timeline.

“We did envision that this was a way to capture history, but also to communicate to people that don’t know about the Japanese American community and their stories,” co-chair of the legacy project committee Joy Misako St. Germain said.

The seven panels are separated into categories, from the discrimiation against the Issei generation, or the first generation of Japanese immigrants to come to the United States, to the acknowledgement of the women leaders that have pushed the Seattle branch to where it is today. Editor and UW American Ethnic Studies educator Vince Schleitwiler explained that the research captured the ups and downs of JACL, including their controversial stance to urge Japanese-Americans to cooperate with government actions and prove patriotism during the 1942 internment camps.

The most detailed slide of the project tells the story of the Redress movement, or the efforts to get an apology from the government for the surviving incarcerated folks. The Nisei generation, many of whom were children during the internment camps, led the efforts to get justice for the previous generation’s trauma. Seattle’s chapter was critical in the national movement with notable leaders such as Cherry Kinoshita, who fought against the lobbying of state legislators, eventually leading to the introduction of the nation’s first redress bill in 1979. Surviving incarcerated folks later received $20,000 from the government after nearly a decade of activism.

“A lot of the Nisei generation are gone or almost gone, and we needed a way to capture their heritage,” committee co-chair and son of Cherry Kinoshita, Kyle Kinoshita said.  “They are the ones who established the organization.”

For many in attendance at Terry’s Kitchen last Friday, the celebration was the first time meeting their fellow JACL members in person after working together for nearly a year online. The Japanese-owned restaurant was a frequent gathering spot for Seattle JACL prior to COVID-19 restrictions. Misako St. Germain stated that this was not only a place for meetings and planning for the organization, but also as a way to have a meal together and build community.

The legacy project committee was excited to have multiple generations work on this collaboration and pass down the organization’s legacy to a new generation of leaders, including three UW interns who worked heavily on the research team.

”JACL has had such a big impact on me and my family that I feel connected to any JACL project,” UW intern Kristen Eng said. “This is very special to me.”

Kinoshita called the panels a ‘permanent monument’ of the last 100 years and a tool for the next generation of Japanese-Americans. Moving forward, the organization is planning to use the panels in churches, cultural centers, public schools and ethnic studies departments as a stand-alone resource or for events to educate on Japanese-American history. As part of JACL’s mission, Tashima also hopes the commemoration reminds its readers to stand up for other marginalized groups that have experienced similar discrimination and trauma.

“As important as what happened in WWII to our community, things are happening now,” he said. “it’s more important that we realize what happened to us and what gave us our voice to speak up for other communities.”