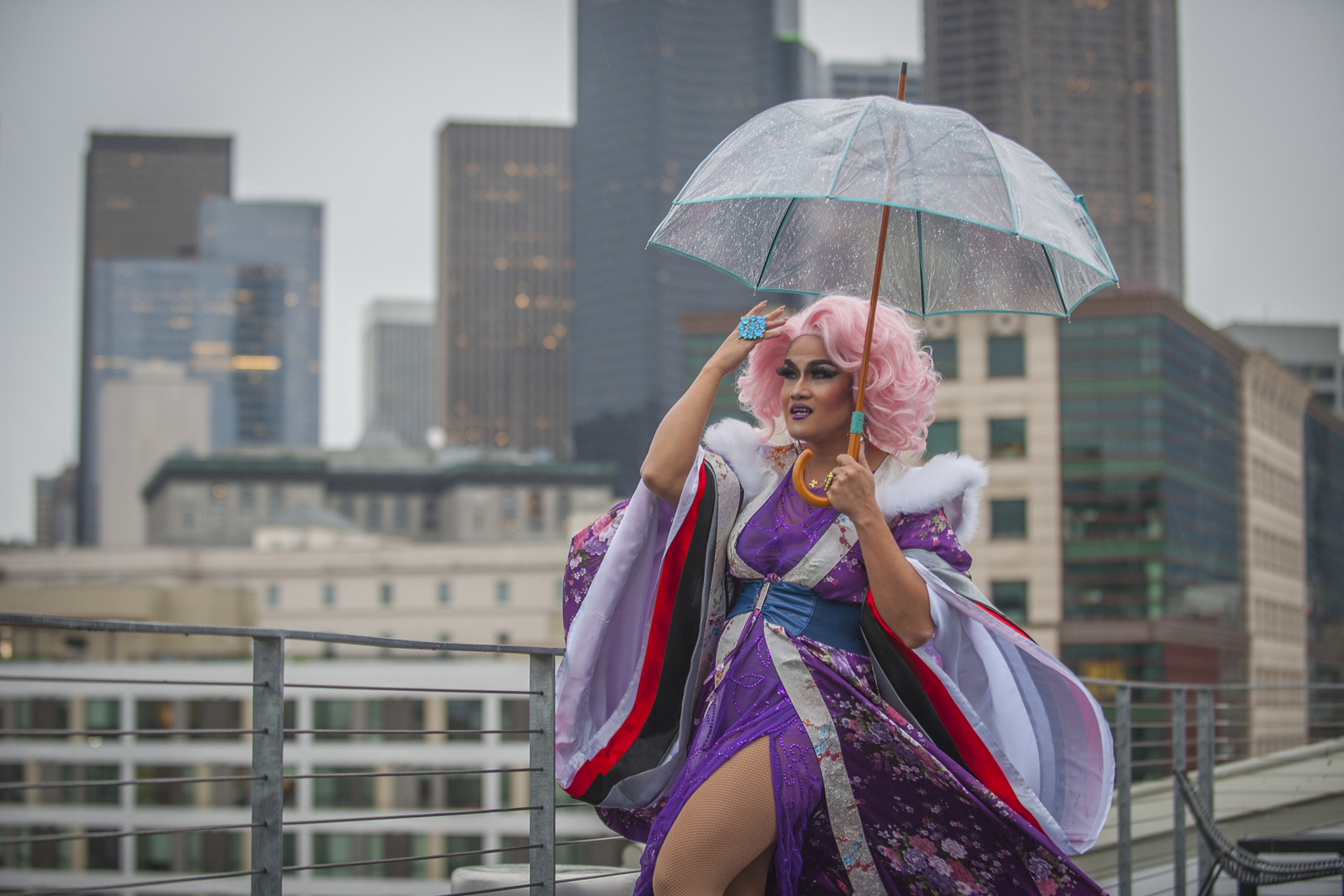 “Drug counselor by day, drag queen by night.” That’s the tagline of Aleksa Manila, an iconic Seattle drag personality who uses her arresting stage presence and appearance to entertain, educate and raise awareness.

In his professional career outside of drag, Manila goes by a different name and works as program coordinator for the harm reduction Project NEON and as an addiction counselor at Seattle Counseling Service, an organization serving the LGBTQ community.

Aleksa Manila the drag personality is deeply rooted in her Filipino heritage. “It’s one of the foundations of my drag expression as an art form, but also as a form of activism,” she said.

Her name comes from where she was born: Manila in the Philippines. She’s lived in the Northwest for over 20 years, about ten of these in downtown Seattle, mostly the Chinatown International District (CID).

Sitting down for an interview with the International Examiner at the Eastern Cafe, Manila brought out a book about Seattle Filipino labor activists Silme Domingo and Gene Viernes (murdered in 1981 in Pioneer Square on the orders of the Marcos dictatorship), a visual history of the Filipino Community of Seattle, and Geisha of a Different Kind: Race and Sexuality in Gaysian America by Chong-suk Han, sociology professor at Middlebury College and former editor of the International Examiner. This last book’s cover features a stylized collage of Manila’s face, her eyes hidden by big shades, posing with a cigarette (when the book came out, she worried people would think she smokes in real life; she doesn’t).

Manila’s drag persona was born from a study she was involved with, of young gay, bisexual and questioning Asian men in Seattle and San Francisco. The study explored how ethnic pride has a positive influence on how people make safe sexual choices. At a cultural event the men put on, she gave one of her first drag appearances. “It was this very meaningful thing for me,” she said.

Years later, in 2001, Manila was crowned Miss Gay Filipino at the Filipino Community of Seattle (FCS), where, she likes to say, she won in every category except congeniality.

After being crowned Miss Gay Filipino, Manila decided to be more intentional with her drag.

“In the Filipino community there’s acceptance of queer culture and queer people, but it’s a stereotype,” she said. “The gay Filipino man is the screaming beautician at the public market. And so when they would watch the pageant that I was in, there was a lot of laughter, but I kind of felt like I was being laughed at alongside my peers. And so I made it a personal goal and mission, like: ‘I appreciate the laughter, but I want you to laugh with me, not at me.’”

Since then, Manila has used her drag persona to fundraise for meaningful causes and organizations and to educate people. She founded Pride ASIA, an AAPI LGBTQ organization that holds community gatherings in Hing Hay Park. She’s been a speaker, announcer, entertainer, performer, and appeared on billboards promoting HIV awareness. She has a long list of awards and achievements to her name dating back to 2001, the most recent being the The Greater Seattle Business Association Humanitarian Award for Community Leader of the Year, and the Community Champion award from the Seattle Women’s Pride and Seattle Lesbian Organization. She was recently one of 100 people living and deceased to be recognized by the Filipino American Student Association at the University of Washington (FASA sa UW) in honor of its 100th year anniversary

In an interview that’s been edited for length and clarity, Manila spoke to the International Examiner about her Filipino heritage, how she developed her drag persona, why she’s drawn to live in the CID, and the troubling erasure of Filipinos from CID history by the Seattle City Council.

In my adult life I felt grounded here as a Filipino immigrant, as an Asian American, as a U.S. citizen, but also being a queer person, being in downtown Seattle, even in Chinatown, I feel safe being queer. I walk out of my apartment building in full drag in daylight and I feel safe.

I remember walking into these restaurants [in the CID] before I even came out, with friends and relatives. This is a central meeting place for all families, for all communities, regardless if you’re queer or straight, or even if you’re Asian or not Asian.

And I think that’s the essence of Chinatowns around the world. I’ve been in a lot of Chinatowns nationally and also overseas. There’s an essence there that you feel like you’re at home.

One of my friends Alexis Landry actually drew an illustration of the Chinatown International District from about 15, maybe almost 20 years ago. You open it up and it was the map of Chinatown. And I have one — they don’t exist anymore, because the map has changed. Even Wing Luke Museum has changed, all of those places are shifting and changing. I was crowned Miss Gay Seattle at the Nippon Kan theater, which is gone — I believe it’s a call center now. I’m kind of sad.

And what’s critical too is oral history. Where are these stories? Unless they’re written down or talked about and in books, in newspapers, whether there’s organizations or just the natural progression of culture morphing and changing, it needs to be kept.

This whole idea of Manilatown missing in the language and the literature and the [2017 City Council resolution]. It’s like you erased me from the family tree. It feels like you just cut off a branch and it was fine — it didn’t need to be pruned, it just needed to grow. How can the Filipino community grow if you cut it off?

I get it if you don’t live here, but could you just open your eyes? Like we’re sitting at Eastern Cafe, next door to the Eastern Hotel, and you just peek through the glass windows, there’s photographs of Filipino American workers that work in the canneries. And there’s quotes from Carlos Bulosan, who was an author who worked in the canneries. He’s Filipino. You walk over that way and there’s a monument that features Uncle Bob Santos, who’s also an activist, he’s part of the Gang of Four.

At the edge of Chinatown is José Rizal Bridge — the national hero of the Philippines, which is attached to Dr. José Rizal Park, that probably has the most beautiful vantage point of the skyline. And Beacon Hill, really thriving, I think there’s a lot of Filipinos there. It’s just crazy-making.

If you could so easily forget and/or not know, and not bother to ask, I can only imagine what that would mean for generations to come. My fear is that slowly, you’re erasing history of Filipino Americans living in Seattle or around Seattle.

And to me, it wasn’t an omission — it was crossed off! But why? Especially not now in the political climate that we’re in. The more divided we are, the more divisive we are towards each other, that’s horizontal hostility. All that does is make the community weaker. And I see that too within the LGBTQ community. It’s like, the lesbians against the gays against the bisexuals against the trans people. All that does is divide up the LGBTQ community. And I think I’m seeing that also with instances like this in the Asian Pacific Islander community, where it’s the different national origin communities going after each other. But why? What does that do for you?

The trick with lip syncing is that you want your audience to relate. So if you do a song that’s relatable and familiar, they’ll know. This is probably the essence for me personally, is that I’m bringing forth something about my culture. And generally the performers that I pick are ones that I’m a fan of growing up in the Philippines. It’s very rare but sometimes I will do songs in Tagalog or some other language. There’s a Filipina singer Lani Misalucha, who sings in Spanish. So I’ve done that at gay Latino events, at organizations like Entre Hermanos. So that’s relatable, they can understand it.

I’ve also lip-synced to Eartha Kitt doing Waray Waray, a song from the Philippines that she sings in Filipino. Things like that, people appreciate because Eartha Kitt, for one, has a very distinguishable voice. You know that’s Eartha Kitt. But then you’re like, ‘But what are you singing?’ Regardless, I got your attention.

I think I was welcomed with open arms [by the Filipino community] because my idea of drag was glamorous. That made it easy. I don’t necessarily do shock drag unless it’s called for by say Halloween or a very specific event. My interpretation of drag is sort of high glam, Hollywood. I was raised by my mom and my mom really loved Audrey Hepburn, Sophia Loren, Grace Kelly — so I take to those actresses for influence.

When I was crowned that’s when I realized, ‘Oh, I have an opportunity here to educate.’ I often share with people that if you’re going to look at me because I look a little different, I’m going to take this opportunity for you to listen to me.

With being Miss Gay Filipino, I was, ‘Yeah, I know this was fun, I won my first pageant, but I actually feel like I have a duty here.’ The culture of drag is truly rooted in activism. The Pride celebrations that we know of today, that’s because of Marsha P. Johnson and Sylvia Rivera, a Black trans woman and a Latina trans woman. At the time they were dabbling in drag and doing drag.

I quickly realized that, I knew I can’t just be like angry towards the Filipino community. I needed to do this in a sort of sophisticated but intentional way. And I think I was successful at it. I remembered showing up for events and I was welcomed with open arms. And I thought that was beautiful.

And to this day, the folks that I met during that period — we’re talking over ten years now — I walk in and they still remember. It goes back to community again. That even though I’m gay and even though I’m a drag queen, I’m respected as a fellow Filipino American, as a fellow community member. That’s beautiful to me. And if we can repeat that cycle for others, that would be great. That would be amazing.

I do have these really precious moments when, every now and then I will have a young queer person, gay, lesbian, whatever come up to me and say, ‘You were the first drag queen I ever saw, and you inspired me to come out.’ Those moments — never mind the accolades, never mind the spotlight, it’s that life-changing opportunity, just because I was trying to be like Beyoncé onstage, and I happened to influence someone to become a Beyoncé themselves. That’s huge to me. And people take that for granted I think sometimes — the power of influence for just being you. That to me is a legacy that I’d like to leave.