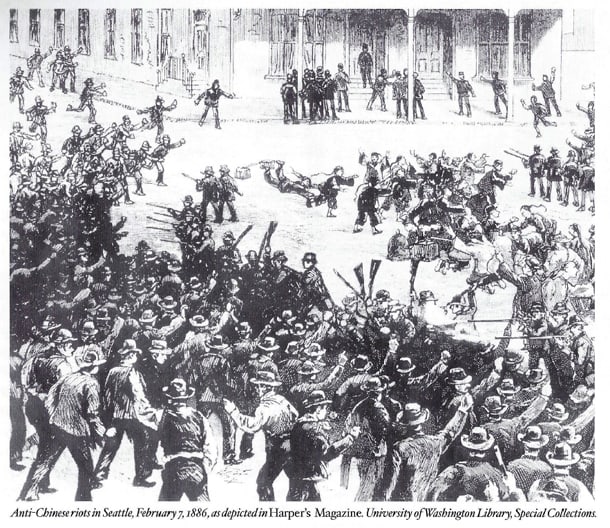 The Seattle City Council approved a resolution on August 3 expressing regret for the anti-Chinese legislation and riots in the 1800s, acknowledging the contributions of Chinese to Seattle, and reaffirming the City’s commitment to civil rights of all people.

To read the full text of the resolution, click here

Councilmember Nick Licata initiated sponsorship of the resolution at the urging of the Greater Seattle Chapter of OCA Asian Pacific Americans Advocates and the local chapter of the Chinese Americans Citizens Alliance.

“We shouldn’t bury our history,” Licata said in reference to the numerous anti-Chinese legislation and the anti-Chinese riot in Seattle in 1886. “Discriminatory policies ripple from the past and still affect Chinese communities today. Awareness and recognition of shame policies in our history is the first step to moving forward together.”

In Seattle, the Chinese laid the tracks for the first railroads to the town; graded Pike, Union, Washington and Jackson Streets; worked at local canneries and sawmills; grew produce; worked as “domestic servants”; dug the earliest portion of the Lake Washington Ship Canal, and established a Chinese quarter in what is now Pioneer Square. At one point, there was 700 Chinese in the town, about 10 percent of Seattle’s total population.

Yet, a number of discriminatory and unfair laws were passed at the federal, territorial, and local levels to get rid of all the Chinese because they were seen as “unfair labor,” unassimilable, inferior, deceitful, and heathens based on race. In 1882, the federal government passed the infamous Chinese Exclusion Act, which prohibited Chinese laborers from entering the United States. When these laws failed to exclude or get rid of the Chinese here, mobs forcibly and brutally drove them out of Seattle and other towns in the Territory. The 1886 anti-Chinese riot in Seattle led to the removal of some 250 Chinese.

“I am really glad to have the opportunity to support this excellent resolution that honestly acknowledges the racist policies toward Chinese in the past,” said Councilmember Kshama Sawant. “The Chinese did some of the hardest work with some of the least amount of pay—being the backbone in building this region,” she added. “This resolution honors that struggle.”

The antagonism directed at the Chinese, and the suffering and harm inflicted upon them is among the worst against any racial or ethnic immigrant group in the history of the American West. The impact of the exclusionary laws and the Anti-Chinese Movement on the Chinese in America was lasted for decades. They lead to the segregation of the Chinese into the Chinatown ghettos, deprived them of opportunities and rights afforded others, and drastically curtailed their population growth.

“The resolution is a strong and powerful statement that expresses gratitude for the contributions of the Chinese and denounces the racial discrimination towards the early Chinese pioneers,” said OCA board member Doug Chin. “It also recognizes the role of the Chinese in the history of this city and will make us feel that we are a valuable and integral part of Seattle.”

“This resolution is a very significant step toward recognizing one of the great—but often overlooked—injustices in our city’s history,” said CACA member Bettie Luke, whose grandfather was Mayor Yesler’s servant at the time of the 1886 riots. “Passage of this resolution will help educate and remind us of the sacrifices Chinese made to Seattle. It means a lot to the Chinese community in Seattle because it gives us recognition long overdue.”

Similar resolutions have been passed by the U.S. Congress, State of California, and City of Tacoma.