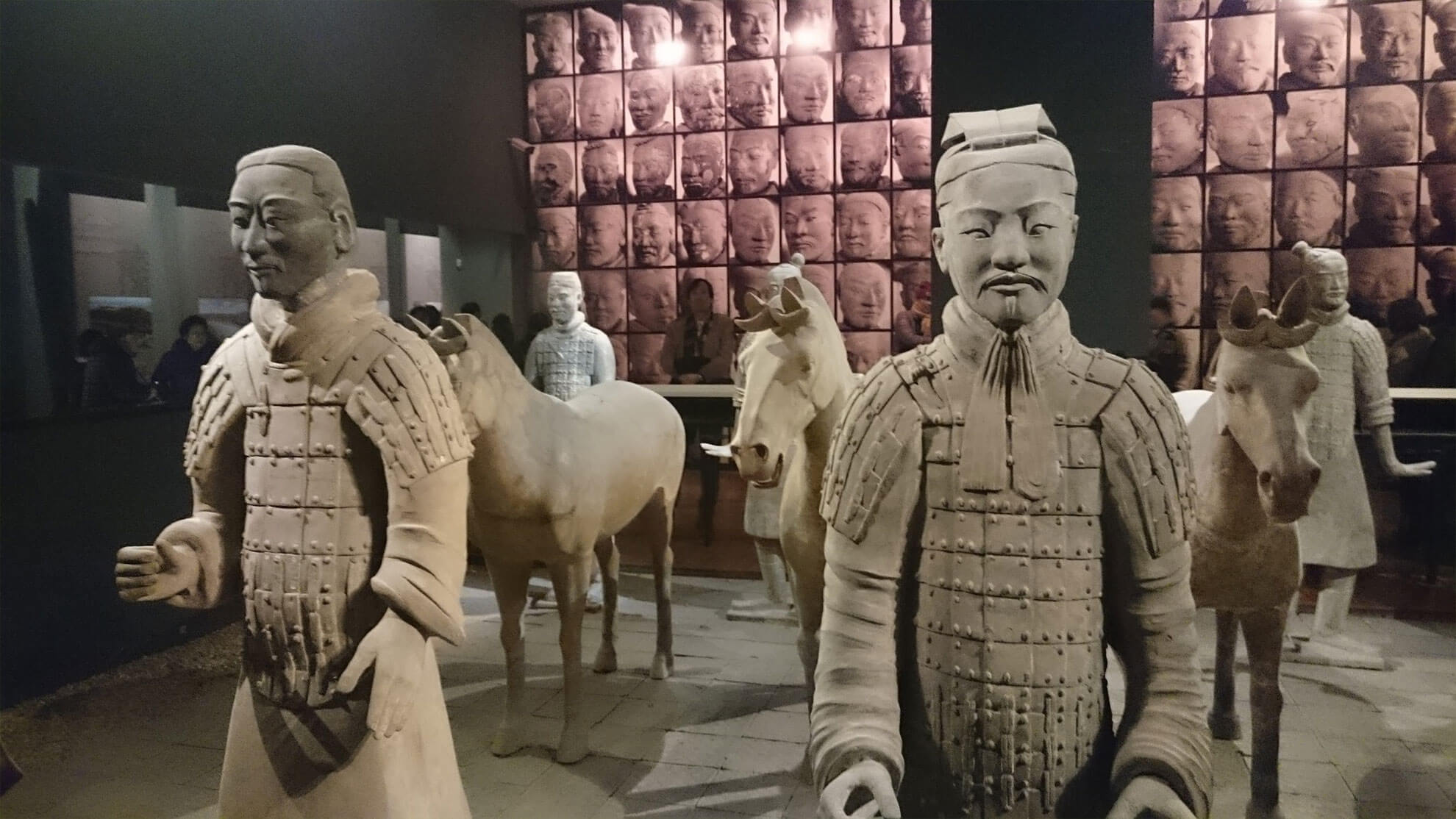 The Terracotta Warriors of the First Emperor are a national treasure in China. A selection of the warriors are on display at the Pacific Science Center at Seattle Center. It’s an exhibit that’s sure to impress adults and children alike.

The Terracotta Warriors are an army of clay figures entombed in a gigantic archeological site associated with the First Emperor of the First Imperial Dynasty in Chinese history. The imperial tomb and the terracotta warriors are as revered in China as the Great Wall in Beijing and the boat ride through the Colorful Caves in Guilin, China. The warriors rest at an archeological site in the city of X’ian in Shaanxi Province in central China.

An IMAX film accompanies the exhibit of the warriors and artifacts of tools and archery and charioteering.  The film “Mysteries of China” puts forth the story and history of this exhibit to the audience.

The tomb of the terracotta clay warriors was first discovered in 1974 by farmers digging a well.  They uncovered a piece of the site and took the remnant to a museum. Ensuing efforts concluded that the pieces they found dated back to over 2,000 years in history. Through ongoing excavation efforts and research through scholarship of historical records, they dated the tomb of soldiers and other artifacts to the Qin Dynasty.

The Qin Dynasty is credited as the first time China was unified, establishing the foundation for today’s modern China.  Before the ruling figure—Shi Huang of Qin—China in the third century B.C. E. was a collection of warring factions of disparate imperial rulers.  But Shi Huang excelled in war strategies and innovations, dominated his enemies, and founded the first Imperial Dynasty of China, the Qin Dynasty.  He was then renamed as Qin Shihuangdi, meaning the First Emperor of Qin.

After the IMAX movie, the audience tours the core of the exhibit, which consists of real Terracotta Warriors from the archeological site in X’ian.  Aside from the clay soldiers, there are artifacts entombed along with the clay army.

It’s a fascinating experience seeing these soldiers. For one thing, no two of the soldiers’ faces are exactly alike.  The comportment and facial expressions of each of the approximately 6,000 Terracotta Warriors are ‘unique’.  And the extent of this site almost appears immeasurable.  There are about ten ‘pits’ in the whole archeological site.  The Terracotta Warriors is only one pit among the ten.

To date, the tomb of Qin Shihuangdi proper remains untouched, perhaps waiting for the technology and science capable of uncovering his tomb without destroying it in the excavation process.

Besides the history, the exhibit takes effort to elucidate the science behind these clay warriors.  It is hypothesized that these soldiers were originally painted with colors.  But as time went on and in excavation, the colors faded away.  The colors on the soldiers, and on the artifacts such as common vessels, are made colorful with chemicals.  For instance, barium copper silicate painted on clay yields the color purple, “Han Purple”.  Another example is Shihuangdi’s personal characteristics.  It is legend that he sought elixirs throughout the kingdom for immortality.  And in the meanwhile until he found the magic potion, he ingested mercury regularly.  Legend has it that he died from mercury poisoning in 210 B.C.

Archaeologists and historians studying this site with historical records offer a view of Shihuangdi’s tomb filled with jewels and gold, elixirs and rivers of mercury.  In his legacy, he was able to unify the country and standardize the currency, weight and measurement systems and a establish a writing system for an early China.

The ‘mystery’ of this tomb is that after Shihuangdi was buried, the tomb lay unknown for centuries until 1974.

The exhibit gears itself towards children’s fascination with the history and the science of the Terracotta Warriors, who come from another time and another culture. Children visiting might also take in the Planetarium shows and the Laser Dome.

The Terracotta Warriors of the First Emperor is on exhibit April 8 to September 4, 2017 at the Pacific Science Center at Seattle Center.