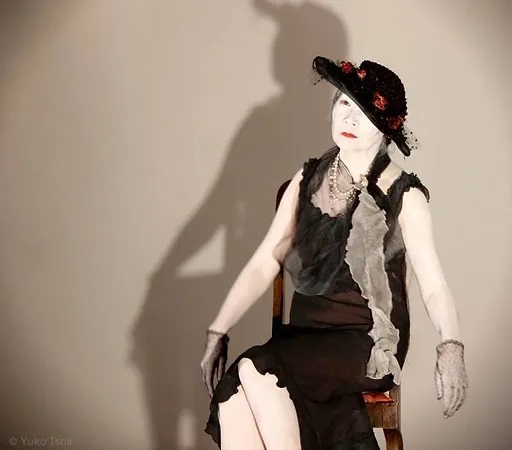 Seattle’s own DAIPANButoh Collective, an association of Butoh dance artists formed in 2009, has been hosting the Seattle Butoh Festival for many years.  The 2011 festival was featured in these pages, as were the 2018 and 2019 festivals, and then, coming out of the Covid-19 pandemic, DAIPANButoh resurrected the festival in 2021.

Butoh is a Japanese form of dance arising from the experience of World War II, based on the avant-garde experimentation of Tatsumi Hijikata and Kazuo Ohno, who collaborated on a “dance of darkness,” in response to both Japanese traditional Noh and increasing imitation of western dance styles.  Much Butoh focuses on the boundaries between life and death, as well as the intricacies of life at the cellular level.

Okumura will be presenting Shadow Flower, which originally premiered ten years ago.  “In 2012, I started a solo Butoh performance series, and organized bi-monthly events at the Taoist Studies Institute in Seattle,” Okumura recounted.  “I felt as if I established my style in this piece.”

Shadow Flower was inspired by the Ajisai (Hydrangea) Revolution in Tokyo, which Okumura describes as a kind of silent march against nuclear power after the tsunami disaster in the previous year.  “This is not explicitly expressed in the piece, though I have the ruined nuclear core in my mind as an original scenery,” she said.  “It was a big movement in Tokyo, though after ten years, what has been actually changed? No nuclear plants have been working in Japan for these ten years, though there is a plan to restart them now.”

After being interested and involved in Butoh for fifty years, Okumura still finds this dance form to be a big mystery that she is eager to explore.  “Since Butoh is so diverse, it always gives me the sense of wonder,” she said.  “This kind of uncertainty and atypicalness would be the source to keep wandering on my journey with Butoh.”

Also part of the Friday lineup, Joan Laage will be presenting DNA, exploring her time spent researching ancestry in Denmark and Germany.  “Working on this DNA keeps reminding me that my ancestry is more stereotypical, more in the main for many, many people,” Laage said. “In other words, my story is many peoples’ story.”

Laage first encountered Butoh in 1982 while studying in Japan.  “Yoko Ashikawa, the main person I was studying with besides Kazuo and Yoshito Ohno, decided to start a second company called Gnome and invited me and others to join,” Laage remembered.  “I think of Butoh as a way, the ‘do,’ as in Chado, Budo, a way that one follows, becoming more and more submerged in, entering more and more deeply.”

Butoh, then, mirrors both the chain of life and the certainty of death.  “There is no end to exploring what this is,” Laage said. “And today, as much or even more than ever, Butoh’s spirit of revealing life in all its ghastly guts and glory, in its calm beauty, and uncertainty, is vibrantly alive.”

In addition to performing, Laage serves in two roles, as DAIPANButoh’s Production Director and Marketing Coordinator.  “I take this role very seriously and feel that it’s my job to make sure the production runs as smoothly as possible,” Laage said.  “I am a very detailed oriented person, performer, and director, so sometimes, I seem to be too demanding to others, yet keep committed to doing the best for everyone, performers, technicians, and audience.”

On Saturday, Sheri Brown teams up with Dhyana Garcia and Nando Rocha to present Sacrament and Gluttony: The Last Potato. “This piece came about in 2009 as a result of collaboration between myself, Dhyana Garcia and our dearly departed Alan Sutherland,” Brown shared. “Seattle’s Butoh poet gem and dear, dear friend, mentor, dance partner Alan Sutherland, who passed away during the Covid pandemic, demands continued witnessing, celebrating, exploration, expression of seeds planted in our collective soul.”

But The Last Potato focuses on humor, rather than loss.  “Theater and humor and experimentation have firm anchors in the Butoh tradition, most famously in terms of Dairakudakan,” Brown said, referring to a Butoh dance troupe founded by Maro Akaji.

Brown has served as Artistic/Programs Director of DAIPANButoh Collective since 2009, and highlights this year’s festival’s focus exclusively on its own members.  “The pandemic hit our community hard spiritually and energetically, but we have worked to remain resilient and purposeful in our production of powerful Butoh offerings,” she said. “Emergence comes from not only the transformative aesthetic of Butoh involving appearing and disappearing, but also the forward intentionality of our 12th Annual Seattle Butoh Festival.”

As part of her leadership role, Brown curated this festival based upon the interests of the performers themselves.  “We work together all year, sacrificing countless hours and to the art of Butoh,” she shared. “We respect each other’s unique perspectives on Butoh.  Our festival is the annual formal space for supporting each other and highlighting each other individually while simultaneously juxtaposing our work.”