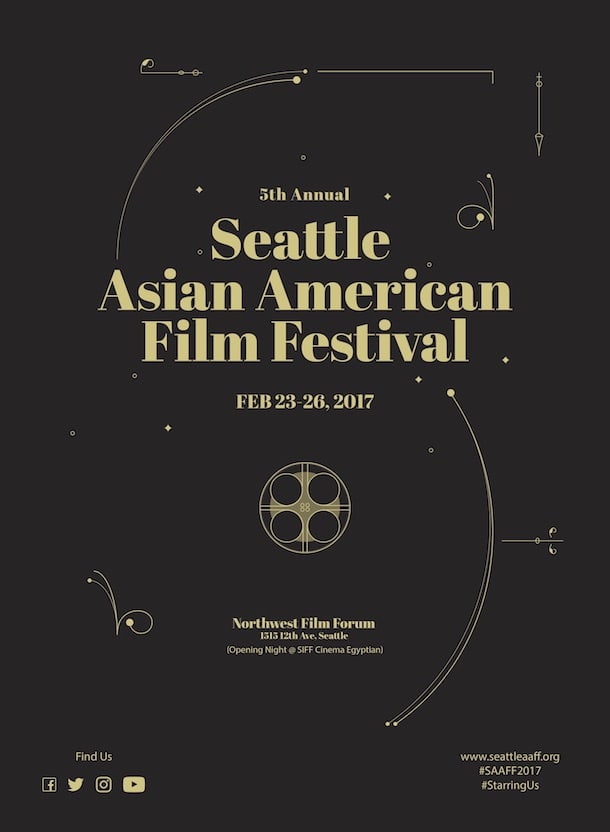 The Seattle Asian American Film Festival is celebrating its fifth anniversary, and is looking both to the past and the future of film.

Although the NWAAFF was unable to continue its operations, Kim was thrilled to serve as inspiration for the new SAAFF team. “I’m in awe of how the SAAFF team took the idea of NWAAFF and created an even bigger, better festival,” Kim said. “It’s a good feeling to know that there are others who believe in celebrating minority stories and storytellers and are inspired to take the idea beyond what you were able to do.”

Current SAAFF Co-Director Vanessa Au emphasizes Kim’s key role in launching the new festival. “Wes was an important part of this iteration of SAAFF because he connected me with my co-founder, Kevin Bang, back in 2012,” Au said. “Both of us had reached out to Kim wondering what happened to the Northwest Asian American Film Festival that he directed, and we expressed an interest in bringing it back.”

Au reports that Kim provided crucial support in making their goal happen. “Wes made the introductions, answered our initial questions about the logistics of putting on a film festival, and before we knew it, Kevin and I were well on our way to making the 2013 festival happen,” Au said.

The importance of SAAFF cannot be understated, according to LeiLani Nishime, UW Associate Professor of Communication. “Film festivals like ours give us a chance to see ourselves in all our beauty and ugliness, to recognize ourselves in others,” she said. “While we want people to see their own stories up on the screen, we also want to create community across ethnic, gender, class, and national lines. We want for people to recognize a shared humanity which is part of the reason we seek out and prioritize films that give us an unfamiliar view of Asian Americans.”

Co-Director Au agrees. “I started SAAFF the year I finished my Ph.D. in Communication in 2012,” she said. “I studied the representation of Asian Americans in contemporary popular culture, the online protests from the API against racist depictions of us, and the racist backlash that erupted in response from some of those protests.”

But studying didn’t seem sufficient for Au. “It felt only fitting to do something about it,” she said, “Something that would have a greater impact, especially for my local community, than writing critiques of popular culture read primarily by other academics.”

After Au launched SAAFF with Kevin Bang, Martin Tran soon joined the team, and later became Co-Director alongside Au. “When our former co-director Kevin Bang departed to work on film festivals in New York, I moved up and into his role,” Tran said. “The transition has been seamless. We understand what we need to do, how to divide the work, and how to support one another.”

Together, Au and Tran work with their team of 15 to make SAAFF a community event. “Every year, SAAFF becomes a hub for local API groups like ACRS, The Wing Luke Museum, NAAAP, JACL, and many others, whom we invite each year to help promote the films to their members,” Au said, “And, in return, they get a chance to introduce themselves to the audience at the start of our screenings, staff a community resource table, and sometimes participate on a discussion panel following a film.”

These endeavors aren’t always easy. “The challenges we face are the same ones that many small festivals and nonprofits face,” Au said. “We are run entirely by volunteer staff who have regular day jobs, so there are a lot of late nights and weekends spent screening films, cold calling business owners, and hammering away at our laptops.”

SAAFF’s team reports that they have had to focus on fiscal stability. “We operate on a very small budget and rely on grants, donations, and a handful of sponsors,” Au said. “We don’t even have an actual office or meeting space, so we typically cram into someone’s living room.”

Co-Director Tran agrees that financial concerns are a priority. “Like all small non-profits, it’s just making sure we have a strong operating budget and can set up SAAFF to continue for as long as we can,” Tran said. “We are blessed to work with a dedicated, talented and insane team that works so hard to make SAAFF a success.”

Despite these challenges, SAAFF is now more important than ever, according to Nishime. “I think that a big part of the reason that we’re in this terrible political moment is that we don’t get complicated images of people of color in mass media,” Nishime said. “We aren’t given the chance to empathize with people who are different from us, and it becomes easier to neglect and even reject other groups of people.”

It’s in the audience where Nishime would also like to see more variety. “I don’t think filmmakers need to water down their movies to appeal to a bigger audience,” she said. “I think audiences need to be more adventurous and be willing to hear new kinds of stories.”

Au agrees that audiences must be willing to choose to see Asian American film within the larger context of available cultural offerings. “We have to compete with bigger film festivals as well as other events going on,” Au said. “It’s incredibly challenging, but we have a lot of determination and passion and that’s what makes this happen.”

Another part of what makes the festival happen is that Wes Kim still lends his guidance toward making SAAFF a success. “A lot had changed in the five years between NWAAFF fizzling out and SAAFF getting a festival started again in Seattle,” she said, including “the venues available for hosting the event, channels for reaching audiences, the API community groups that support us, technologies for organizing, running the call for submissions and ticketing, and even the maturation of Asian American filmmaking itself.”

But SAAFF was formed as a community that strives to be inclusive. “Wes remains a member of the private Facebook group our staff uses to communicate and collaborate,” Au said, “and he continues to chime in here with great ideas, advice, encouragement, and the occasional bad joke.”