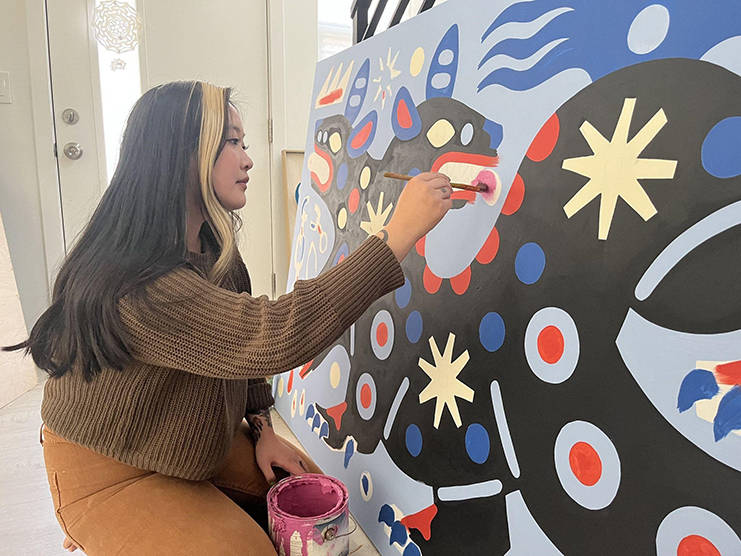 When COVID-19 forced many Seattle businesses to close, store owners sought to fill their windows with art instead of blank wood.

Suddenly, there was a call for muralists to tell their stories.

One of these muralists was Stevie Shao. With a certain unapologetic style filled with bold colors, Shao’s art is recognized across Seattle on stores, buildings, posters, and even Russell Wilson’s shoes. She has become one of Seattle’s most popular artists in the past two years and continues to rise as a muralist and illustrator.

Shao is often inspired by her roots and the community around her as a proud second generation Chinese-American. However, embracing her own culture and identity was not always easy for her.

In the 1990s, Shao’s parents immigrated from Shanghai, China to America. They moved into the Seattle neighborhood of Ballard where Shao and her sister were born.

“It was really important for my parents that my sister and I assimilate,” Shao says, “Especially since we lived in a pretty white and affluent neighborhood.”

She remembers only having one Asian-American classmate in both elementary and middle school.

“It is extremely traumatic to not see anybody that looks like you growing up,” Shao says, “It’s not enough to see your parents out in their world…your parents are something else, living a different life.”

It wasn’t until college did Shao start to find parts of herself. She attended Seattle Pacific University and majored in interior design. Even though she still felt isolated and uncomfortable as one of the few Asian-Americans, Shao started to discover more of her world through art.

“I had a couple of professors who were really intent on helping me,” Shao says, “They really believed in me.”

One of these professors was Rachel Sumptre, who sent Shao several links to Chinese-American illustrators who were also of different generations.

“When I met her, I hadn’t fully come into the fact that there’s nothing wrong with being Asian American,” Shao says, “It was exactly what I needed to see, people who looked like me doing something I can do.”

After graduating from college, Shao started to intentionally seek out Asian-American and BIPOC communities in Seattle. During the George Floyd Protests and the rise of hate crimes against the AAPI community, she committed to making a lot of protest graphics.

“That was the first part of me getting really connected to a bunch of other people of color in the city,” Shao says.

Today, much of her art proudly centers around her own narrative and culture. Her own childhood, along with many other Chinese-American childhoods, consisted of storytelling used as a form of teaching. Shao refers to a specific example of the year of the metal rat. She points out that both the element and animal contribute to the year’s significance.

“I think that feeling is something I really try to capture in my work,” Shao says, “It’s very mystical…a suggestion that everything in your life and surroundings have meaning.”

Shao focuses on reimagining the folktales of her childhood and creating illustrations that invokes the mystical feeling these stories gave her. Art became a way to reconnect with herself.

One of the pieces Shao is most proud of, and is an example of her recreation of folktales, is an installation at the Wing Luke Museum where she collaborated with fellow artist, Monyee Chau. The installation features two tigers from a Chinese nursery rhyme.

“It was very rewarding,” Shao says, “We both heard this story growing up and we got to put our own spin on it.”

Along with creating her own art, Shao says it’s very fulfilling to have other Asian-American artists and people reach out to her. She recently received a note from a mother and her two sons who drew their own dragons for Shao.

The note read, “I feel so much hope and possibility for the future of women. Bold, beautiful Asian people and art when I look at your work.”

Shao gets a little misty-eyed when talking about the boys and their hand-drawn dragons.

“It’s really, really gratifying,” Shao says, “I didn’t have that growing up…a very vocal person to look up to.”

Looking towards the future, Shao says she wants to remain active in Seattle while uplifting people with similar backgrounds to her. She wants to continue collaborating with other artists and hopes to see more outspoken Asian artists on national platforms.

Find Stevie Shao and her art on instagram @stepfrae.