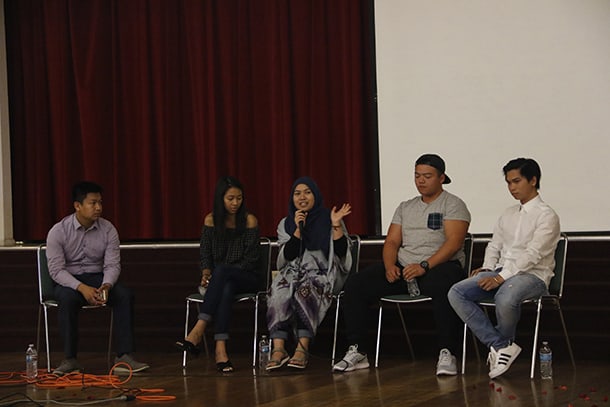 Between 50 and 70 percent of Southeast Asian Americans have not attended college. The percentages for those without high school diplomas is also high.

Over the past few months, Sam Le, SEAeD’s Legislative Coordinator, and interns Jessica Do, Cynthia Nguyen, Nancy Lu, Dylan Tran, and Chanthadeth Chanthalangsy, set out to interview and collect the stories of Southeast Asian students in higher education. These students come from various academic pursuits and ethnicities, including Cham, Mien, Lao, and Vietnamese. In addition to these interviews, the group also engaged with local communities to address various issues, including the need for data disaggregation and ethnic studies in Seattle Public Schools.

Ay Saechao, SEAeD’s Board President kicked off the event with some remarks. “Sometimes our numbers can be lost in the translation, meaning we are often lumped into this big group called ‘Asian American.’ [It’s] a huge group that includes numerous different ethnicities. When we’re lumped into that group, guess what happens to our Southeast Asian identities and communities? It gets pretty much erased.”

“For Southeast Asian communities, there are a lot of major discrepancies and challenges we face in comparison to other Asian American populations,” said Le. “Really understanding what our communities are facing, being able to express it through data, and being able to tell our stories based off those numbers, we can really convince legislators and councilmembers to enact change.”

In terms of the state moving forward with data efforts, some highlights in the presentation included the passing of House Bill 1541 into legislation in 2016. This bill implements strategies to address and close the educational opportunity gap. Additionally, the presentation also touched upon the recognition and collection of data of Southeast Asians through the University of Washington’s Office of Minority Affairs & Diversity.

Regarding the more recent push for ethnic studies in Seattle Public Schools, Dylan Tran said: “The Seattle Public Schools board responded with an Ethnic Studies Task Force, and that’s still being formed right now. It’s up to us as a community to put together pieces of ourselves and pieces of our history on that task force so that our narratives can be told in our textbooks. It’s our opportunity to write the history books.”

Following the presentation was a keynote speech from Tốn Nguyễn, a Youth Initiatives Manager at Workforce Snohomish. Nguyễn discussed his own experiences growing up and working with youth in various diverse communities throughout Snohomish and King counties.

“[In high school] it took one teacher that really cared about me to finally help me get back on track. That one teacher didn’t have to do a lot, they just simply had to sit me down and tell me what they saw in me. I think a lot of times, kids don’t hear that enough. … Sincerity is such an important aspect of engagement.”

The event concluded with a four-student panel consisting of current undergraduate students from the University of Washington. The students took turns answering questions that ranged from discussing their educational experiences to important influences and inspirations.

Faridah Abdullah, a senior at the UW, commented on her educational experience: “Something that inspired me in my education was that good grades meant that I was getting approval from my parents. I have a language and cultural barrier with my parents, me being born in America and them being born in another country. To them, what they know from their friends and other people is that if their kids did well in school, then they would go to college, get good grades, and get a good job and money. The only way to say that I really appreciated my parents was getting good grades because I didn’t know how else to tell them.”

Vyla Phavong, a junior at the UW, reflected on the support she received from SEAeD Coalition, “Growing up in a diverse community and going to a primarily white high school, I didn’t grow up with people that had the same goals as me or knew what was going on. When I joined SEAeD, I met a lot of mentors and leaders in the community that were so willing to give me the opportunities and support me that I was taken aback by that. The community was a huge support [system] for me.”