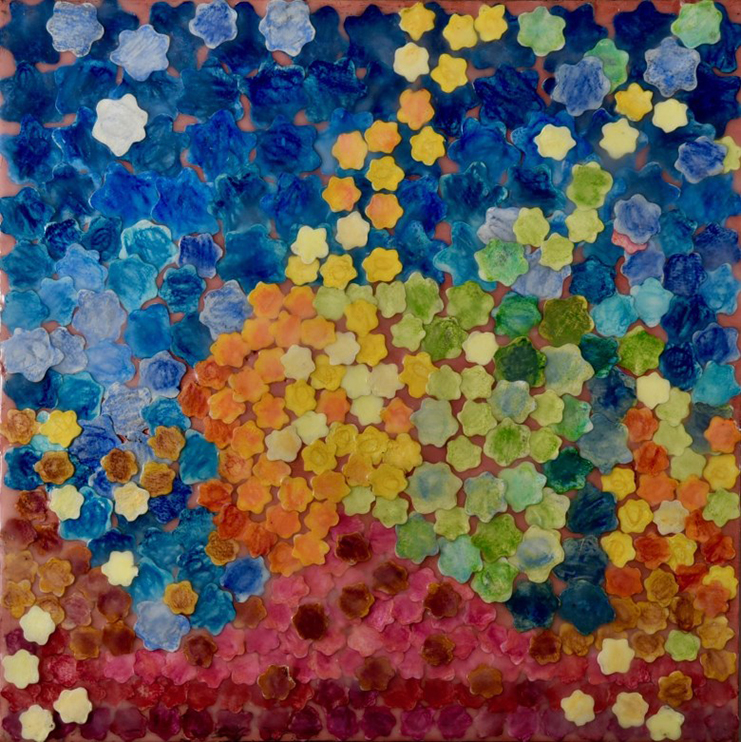 Visual artists often seem solitary, but here in Seattle, they can also seek community with other artists – and sculptor Kamla Kakaria is no exception.  Initially, she held membership with Shift Gallery in Pioneer Square, and more recently, has become a member of   Columbia City Gallery.

Gallery members each have the opportunity to display work regularly and to help other artists. “Since I am very busy as the Studio Manager of Pratt Fine Arts 2D program, I wanted to commit to doing at least one show every year,” Kakaria said. “I really like that Columbia City Gallery is also a store, and members sell quite a bit of work as well as featuring groups of artists, many underrepresented and with interesting points of view, in the Guest Gallery.”

Kakaria’s journey to the Columbia City Gallery began in early childhood. “I was first exposed to oil paintings very young at the Museum of Fine Art in Boston,” she said. “I was so drawn to the paint strokes, the colors, just the power of painting.”

She was both transfixed and inspired. “I couldn’t move away from the paintings,” Kakaria said. “I decided then that I wanted to be an artist.”

Initially, Kakaria let her training evolve organically. “As a young working single mom, I took part-time art classes for years, until I received my BFA,” she said, emphasizing that she was more interested in creative expression than in the academic credential. “I just needed to do artwork to stay balanced.”

But as time passed, Kakaria decided to pursue a career change. “I wanted to move from jobs in the service industry to making a living with art at the core,” she said. “I decided to pursue my MFA because it was a terminal degree, which meant it was as high as you can go in visual art.”

As a single mother, Kakaria faced economic barriers, but sought out any available assistance. “I was able to take advantage of the many scholarships for MFA’s in visual art,” she said. “Students have to have studios, so there are not as many graduates at many schools, and so more scholarships to go around.”

After completing an MFA in printmaking, Kakaria pivoted toward large sculptures and wall installations. “I like making pieces out of many small pieces,” she said. “Creating an environment by making work larger than me is satisfying.”

Kakaria is comfortable working with paper, wire and wax, but has started exploring new components. “I am currently in the City of Seattle’s Public Art Bootcamp’ and am working on making an installation to attach to a fence and be outside,” she said. “Researching materials in this way is new for me and pretty exciting!”

Cultural explorations have also been a key aspect of Kakaria’s work. “Celebrating my Indianess was a series I did a few years back,” she said. “It is an acknowledgement of the influence of my cultural background that has always had on my aesthetic.”

She delved into similar themes with her other series Hiding in Plain Sight. “I struggled with dealing with the cultural appropriation by a lot of white women in the U.S. of the Indian aesthetic,” she said. “I am proud of my cultural heritage and embrace the natural impact it has on all my work.”

Kakaria wanted to dive even deeper into her East Indian background, and in 2016, she received an Artist Trust GAP award to travel to India for research – but it was not to be at that time. “Sorry to say I never made that trip that year,” she said. “Traveling to India always overwhelms me in an amazing way with the sounds, smells, and visual stimulation.”

Travel is still off the table, in the midst of the COVID-19 pandemic. “The first few months during the lockdown, I was crazy productive,” she said. “I hadn’t had that much time off since I was a teenager, and felt like I needed to take advantage of that.” But Pratt Fine Arts Center needed Kakaria to help shape remote education for its students. “I had to go back to work and figure out with my co-workers how to offer art-making classes virtually,” she said. “This was incredibly time-consuming.”

Happily, for the next several months, Kakaria is back to focusing on creating new work. “I am on the other side of most of that work at Pratt now,” she said, “and am putting a lot of energy into the Public Art realm with the City’s Bootcamp.”

Her work is also part of Columbia City Gallery’s silent member auction, which in taking place in two parts, through February 24. Among the 66 pieces on auction during the first phase of the auction, Kakaria experiments with shapes and dots in three pieces, called Play D, Play E, and Play F, using colors primarily of yellow, magenta, and black.

On January 29, a new set of pieces will be was presented on the gallery’s website: https://columbiacitygallery.com.