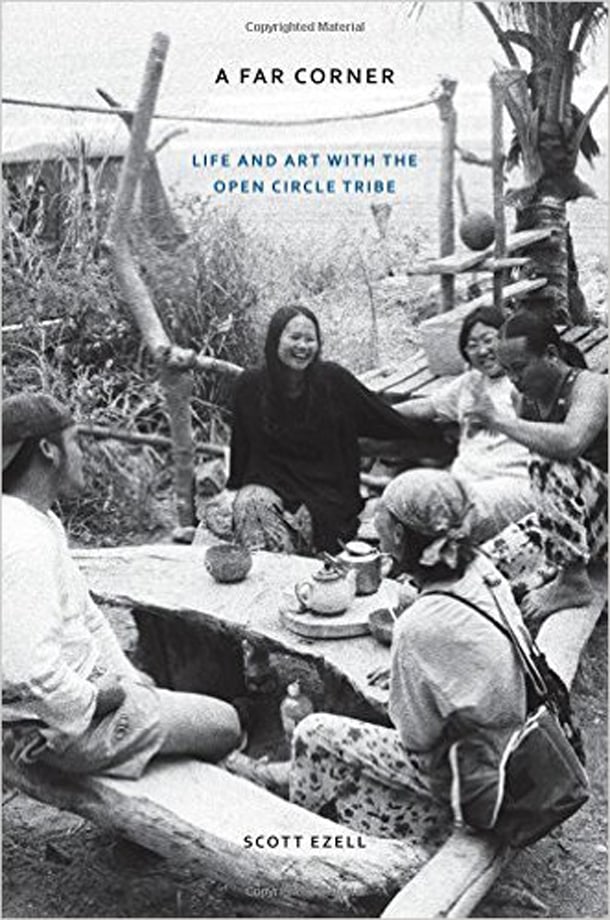 After a decade of living in Asia, American musician Scott Ezell moved to Taiwan’s remote Pacific coast in 2002, where he takes up residence amongst members of the Open Circle Tribe—a loose confederation of aboriginal woodcarvers and artists—before his deportation two years later for performing without a permit at the legendary Dulan Sugar Factory. A romanticized account of booze-fueled bohemian life on the margins, A Far Corner: Life and Art with the Open Circle Tribe will likely appeal to academics more than general audiences, if there is any value to be derived at all.

Ezell decamps from Taipei to Dulan, a coastal community, where as the sole American, he finds acceptance of his work and a sense of home. In a comic scene that distills Taiwanese manners and generational differences, Ezell describes his efforts to secure a lease on an abandoned farmhouse. Farmer Huang, a local resident, discourages Ezell from renting a property that he considers haunted and refuses to make the necessary introductions to the landowner. But Huang’s son casually intervenes, causing his father to lose face, and sets the deal in motion. Ezell secures a lease on the farmhouse and sets up the analog recording studio where he produces his album Ocean Hieroglyphics.

Scattered throughout Ezell’s book are extensive academic passages contextualizing the history, social, and linguistic status of Taiwan’s aboriginal people from Puyama, Paiwan, Tao, and Ami tribal groups. Reflecting on the similarities between the aboriginals and Native Americans in the Pacific Northwest and beyond, the author finds affinity with his band of tribal artists, who “had left ‘home’ with a desire to reinhabit, rediscover, or create an identity more genuine to them. The marginal regions of eastern Taiwan held the possibility of self-determination that was difficult to cultivate elsewhere in contemporary Taiwan.”

While Ezell shows some understanding of Taiwan’s colonial history, particularly as it relates to tribal peoples, A Far Corner also chronicles Ezell’s sexual dalliances with a number of local women, which feels evocative of other colonialisms—i.e. the painter Paul Gauguin’s residence in Tahiti. Ezell secretly juggles two women—Ming-sho and Diva—who ultimately become best friends and learn the truth about Ezell. Both end their intimate relationships with him. Writing on his relationship with women, Ezell reflects, “I was at least as full of shit as anyone, and my balance or detachment with respect to her [Diva] was only due to the remoteness with which I insulated myself, unwilling or unable to share my emotional or physical space with another. Unable, in other words, to open the heart.”

Ezell never pretends to be an ethnographer in A Far Corner, painting only a picture of what it was like to “be there” in Dulan, during the height of the Open Circle Tribe’s artistic activity. But like an ethnography, Ezell’s narrative ventures into self-reflexiveness of his position as insider and outsider in a close-knit tribal community. Ezell experiences the death of members of his artistic community, but turns away from the privilege and responsibility of grieving with the tribe. After helping to reclaim his friend’s corpse from the morgue, Ezell hitchhikes to Dulan stinking of sweat and beer and rot and sorrow, traumatizing the family who offer him a ride. He can’t imagine being buried in Dulan. But the circumstances of his abrupt departure create a nostalgia and unfulfilled longing.

At its center, A Far Corner belongs to the category of exile literature. Ezell writes, “Exile may be the only door to the pantheon, though you’ll likely be dead before they let you in.” Ezell’s memoir serves as a document of his inclusion in a major international art movement—but his book lacks the open heart of other books on exile experience in Taiwan, like Mike O’Connor’s The Basin. Ezell acknowledges O’Connor, who published several of Ezell’s poetry collections under his Empty Bowl imprint in Port Townsend. He also gives a nod to Chinese translator and essayist Red Pine (Bill Porter), who lived in Taiwan for years. (Ezell inherited Porter’s used tatami mats.)

But aesthetic associations don’t elevate Ezell’s effort into a transformative work. A Far Corner lacks the elegance and skill inherent to authors like O’Connor who write tenderly and eloquently of Taiwan in the spirit of the T’ang Dynasty poets, integrating the heart of the people and the textures and vibrations of a fully lived experience into a work that pushes beyond cultural tourism, or ethnographic musings, into literature.