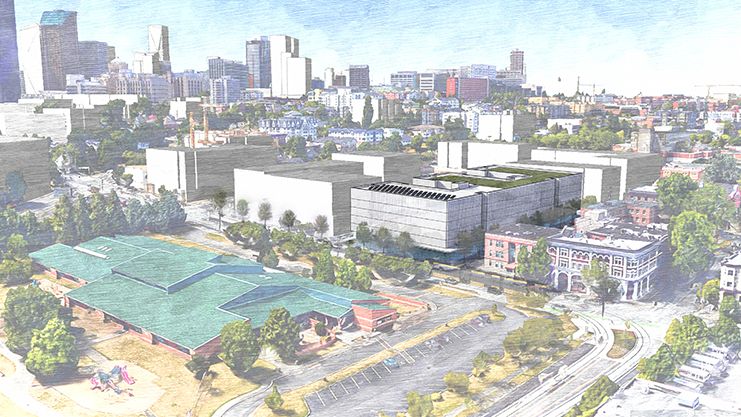 A new building with 158 affordable apartments is slated to open in 2021, marking the latest chapter in the transformation of Seattle’s oldest public housing development, Yesler Terrace. The project, known unofficially as Yesler Family Housing, will in part be replacement housing for some of the former residents of Yesler Terrace, but will also offer new affordable apartments to city residents. The Seattle Chinatown International District Preservation and Development Authority (SCIDpda) is leading the development alongside Capitol Hill Housing, while the Seattle Housing Authority (SHA) is providing the land and some of the funding.

SHA executive director Andrew Lofton said in a statement, “We are excited to be working with two great organizations, SCIDpda and Capitol Hill Housing. This alliance brings together organizations that have an understanding of the community, experience in affordable housing and embracement of the vision for Yesler Terrace.”

SCIDpda will be the primary owner and property manager for the project, while Capitol Hill Housing will be the developer. The building is intended to the meet the needs of working families, as the majority of the units will have between two- to four-bedrooms, and a child care center will be located on site. It will also feature common areas for resident activities, a community garden and 1,000 square feet of commercial space along Yesler Avenue.

Michael Omura, the project development manager for SCIDpda, said construction on the new building, which will be located between Yesler Way and Fir Street on 13th Avenue, should start by June of 2020. The building hasn’t yet been designed, but an architect, Mithun, has been selected, and contractors are in the process of being chosen. Completion of the building is due by the end of 2021.

Additionally, 60 percent of the units in the development are held for those who have been forced to move from the Yesler Terrace public housing complex, which had 561 apartments that are progressively being demolished.

That requirement is part of the “Yesler Promise” that was made by SHA, an independent public corporation which owns the property, to all residents at Yesler Terrace before the redevelopment began in 2013. Those residents were guaranteed that they would be given comparable housing and moving expenses if they had to relocate, a priority right to return to new housing at Yesler, or an opportunity to move straight from old housing into new if they are in areas where the phasing of the redevelopment enables that on-site transition.

Funding for Yesler Family Housing came from several sources. SHA, which owns the 45,000 square-foot parcel of land on which the building will be constructed, donated an 85-year lease and supplied $4 million in cash to the project. Further, the City of Seattle Office of Housing granted $6 million in funding. The project is also receiving low income housing tax credits from the federal government and may seek commercial loans to cover some of the costs. Additionally, due to contamination of the site, the development group will also be applying for funding from the Washington State Department of Ecology and the federal Environmental Protection Agency to cover clean-up costs.

Yesler Family Housing will be the first affordable housing project that SCIDpda has developed since 2004. The organization already manages more than 500 units of affordable housing in the CID and plans to use that experience in the new project. Jamie Lee, the director of community initiatives at SCIDpda, said that, “I think for us it was really about the way that we do housing development and it goes in line with the way we do community development, which is really doing things intentionally in a way that responds to the needs of the community.”

Yesler Terrace was built in the 1940s as part of President Franklin Roosevelt’s New Deal and was the first racially integrated public housing project in the United States. Its redevelopment, which is expected to take more than a decade and cost $1.7 billion, is converting the 30-acre site into a mixed-income neighborhood with up to 5,000 residential units, as well as retail and office space. In addition to replacing the 561 units lost from the demolition of the original Yesler Terrace, SHA plans to add another 290 affordable income units in the area.