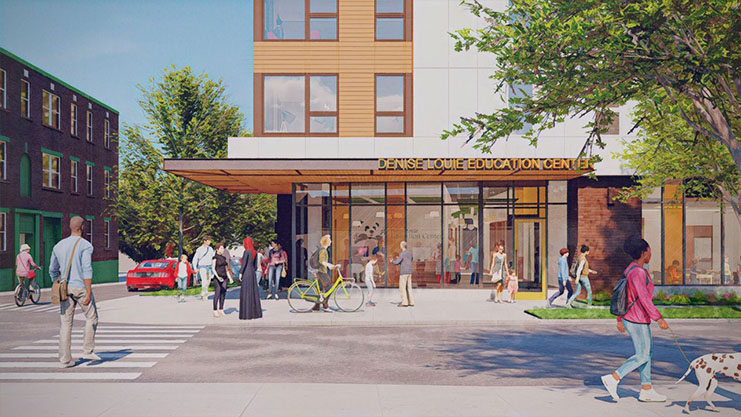 The project, known as Yesler Family Housing, comes as part of Seattle Housing Authority’s (SHA) larger neighborhood development of the nation’s first racially-integrated housing project, Yesler Terrace. According to SCIDpda’s director of properties Jared Jonson, SCIDpda will be the first non-profit organization to sponsor a project as part of SHA’s ongoing efforts to redevelop the area.Built on the corner of 13th Avenue and E. Yesler Way, the mixed-use building will feature 25 three-bedroom and seven four-bedroom units to house current and returning families at 30 to 60% Area Median Income (AMI). In addition, the ground floor will have commercial space for the Denise-Louie learning and child care center, as well as retail space for small businesses.

Jonson said the units are meant to accommodate multigenerational working families, an aspect of Seattle real estate that he believes has been overlooked in the last decade.

“When you look at the housing needs of our city overall, there is an obvious need for family housing,” he said. “The real estate boom of the last seven or eight years has all been focused on studios and one-bedrooms; places that are nice, but not where a family of four, five and up can live.”

After the completion of International Village Square in 2004, rapid real estate costs in Seattle have made it more difficult for SCIDpda to take on more affordable housing developments. The organization, however, is hoping that the community-based housing of Yesler will serve as a model for their next round of projects, including similar plans for housing in North Lot.

“We are developing our projects to pave the way for new generations of refugees, immigrants and people of really low means to be able to live in an environment where they feel supported and connected,” Jonson said.

SCIDpda communications manager Joseph Guanlao stated that the building grounds of Yesler Family Housing is an intersection of both high opportunity and displacement of communities of color. In an attempt to address this crossroad, the organization is implementing affirmative marketing strategies and a community preference policy to prioritize individuals or families with historic ties to the neighborhood.

“It is a form of anti-displacement to house the kinds of people we want to house and give access to those opportunities,” Guanlao said.

MarPac Construction is partnering with SCIDpda as the general contractor for Yesler housing as well as for future projects. While MarPac is working against the inflation of construction material as a result of COVID-19, managing principal Sai Chaleunphonh is excited to continue building affordable housing in order to preserve the culture and community.

“All these organizations in the ID work to preserve the culture so it’s not sold out,” Chaleunphonh said. “A lot of other neighborhoods in Seattle have already been gentrified, but in the ID, we have the opportunity to not have that happen as rapidly.”

Yesler Family Housing is anticipated to open its doors early 2023. While the project is built as part of SHA’s redevelopment of Yesler, SCIDpda hopes the location will also serve the surrounding communities of Little Saigon and the Central District.

“Family housing is a need that is out there and will continue to grow if we want to be the kind of city that has variable housing and opportunities for all people regardless of income level, immigrant status, or background,” Jonson said.