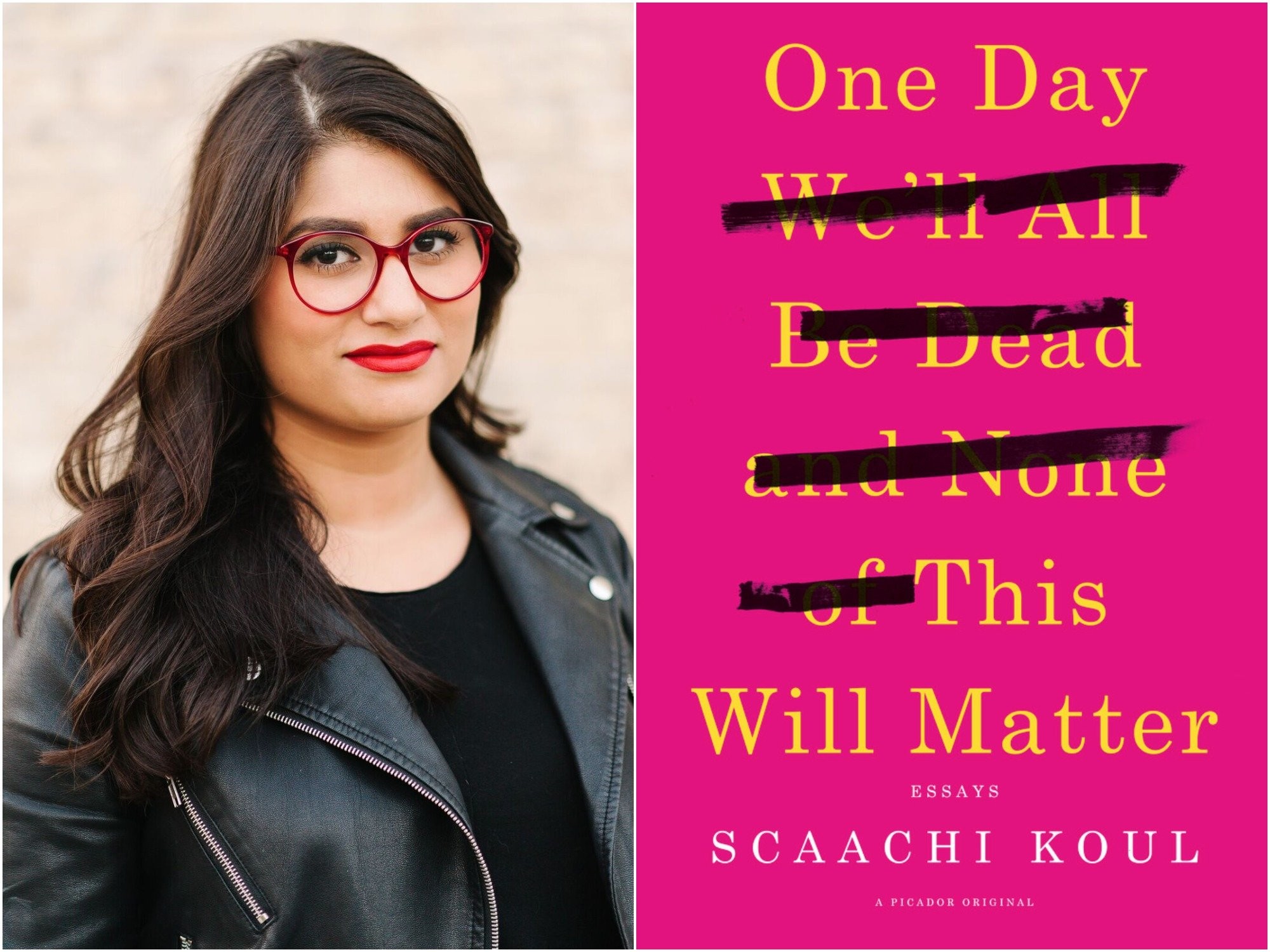 In an essay in BuzzFeed, “User’s Guide to My Stupid Name,” Scaachi Koul humorously explores how her name came about, how it is pronounced or mispronounced in two continents, and ultimately what it means to belong in multiple cultures. A senior culture writer for BuzzFeed, Koul’s work is familiar to many readers for its scathing humor, its razor sharp observations about race and culture, and for its authentic voice that refuses to be suppressed. This debut collection of essays, One Day We will be Dead and None of This Will Matter: Essays, is full-throated Scaachi Koul—acerbic, honest, warm, funny, and occasionally confessional.

A major theme in Koul’s writing is that of cultural identity and belonging. The youngest child of Kashmiri immigrants to Canada, Koul opens her book with an essay “Inheritance Tax” about her fear of flying. She writes, “My parents were afraid of plenty of things that would likely never affect us—murderers lurking in our backyard, listeria in our sandwich meat, vegans—but dying on a plane was all too mundane for them.” This trip with her white boyfriend, nicknamed Hamhock, becomes the occasion to tell us about how her parents came to Canada, about managing different cultural expectations, the inevitable transformation of family, and the loss of relatives back home. Haunting all this, though not extensively explored, is the complexity of homeland for a Kashmiri Hindu. In another essay “Aus-piss-ee-ous” Koul writes about traveling back to India with her parents, her brother, his white wife, and their biracial child, nicknamed Raisin.

Through Raisin who is light skinned and blue eyed but has a Hindu first and last name and is still young enough not to fully grasp the many issues of identity, Koul takes a multigenerational look at race and belonging with a mixture of humor and warmth. In her essay “Size me Up” she writes about the perils of a curvy South Asian female body in relation to fashion. In a fall off the chair laughing moment for the reader, she describes in excruciating detail her getting stuck in an outfit she tries on and which she eventually needs to be cut out of by the sales associate.

One of the most powerful essays in this book is “Mute” in which she recounts her brutal Twitter experience. In it she looks at how media, especially social media, has changed how people interact with each other. Taking the reader through an entertaining history of her own experiences with online communities, she discusses the racist and sexist biases of media. In her role as an editor, she had tweeted that she wanted to commission more pieces by non-white non male writers and the twitter exchanges became heated over several days leading to her experiencing racist and misogynist attacks that included death threats and rape threats. After several days of non-stop tweeting, she took down her Twitter account when her wise editor noted that she had no obligation to respond to every person and that she could stop. This essay is not as much about the effects of the twitter war on her psyche as it is about the absence of diversity in the media and the venom directed at women of color in the media business.

Koul’s essays are necessary at a time in our culture when xenophobia and misogyny are on the rise and when social media allows hate speech to traverse across the globe. Koul’s courage and her astute observations tempered by a wicked wit make this collection of essays worth reading.