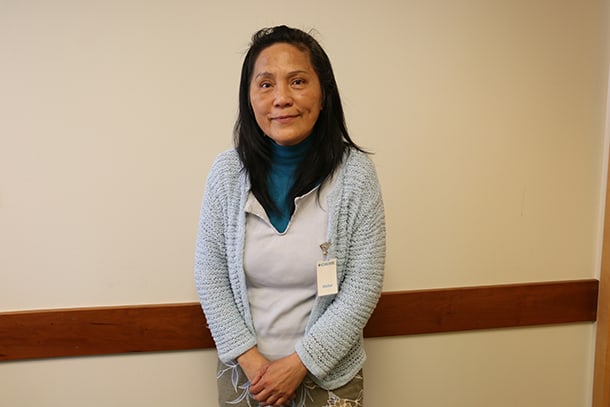 It is one of life’s great ironies. As a resident of Hong Kong—the home Yinha Lai left behind more than 20 years ago—she had regular and unimpeded access to one of the world’s most advanced, low-cost universal health care systems. Here in the United States, Yinha’s adopted home, a trip to the doctor’s office has been something she has felt she cannot afford.

Petite and well-spoken, looking sprightly in periwinkle blue, Yinha is composed as she explains how a fear of high health care costs kept her from making an appointment for a health exam.

“I have a lot of credit card debt accumulated from the recession and have been without insurance since my divorce. I thought I would be fine waiting until I turned 65. I look healthy. I’m energetic,” she said.

Instead of seeing a doctor, Yinha hoped her body’s message that something was wrong would simply go away.

“For the past year or two, the left side of my body has not been quite right. Recently, it felt like a pinch in my left breast,” she said.

She carried the fear of cost with her as she went to see Dr. “Kimo” Hirayama at International Community Health Services (ICHS) clinic in Seattle’s International District. Her choice was deliberate. Dr. Kimo cared for Yinha through a pregnancy, gave her children their well child checkups, and oversaw countless family bumps, bruises and immunizations. He has been Yinha’s family physician for more than 20 years.

“I didn’t have health insurance and there is no other doctor I trust. I went to see him and he sent me to get a mammogram,” she said

Yinha’s results showed signs of breast cancer, frightening for anyone, but especially for someone in her vulnerable position. Fortunately, Yinha found help at ICHS.

Veronica Kim, ICHS’ Breast, Cervical, and Colon Health Program coordinator, retroactively enrolled Yinha in a Susan G. Komen program that covered the cost of screenings. Once she was sure that Yinha was freed from paying for any expensive tests or consultations out-of-pocket, she helped schedule the biopsy that confirmed cancer in Yinha’s left breast.

Veronica, a motherly, elegant Korean American, is familiar to many within Seattle’s Asian community. She has run local community breast cancer education and screening programs directed toward immigrant women since 1995. She also is finely attuned to her patients’ feelings and questions. Veronica herself is a breast cancer survivor.

“I know help is on the way. I’m grateful for Veronica. I would be struggling without ICHS,” Yinha said.

Yinha found herself in a particularly tight spot with life-altering implications. The owner of a small business, her income is above the qualifying threshold for Medicaid, as well as the Washington State Breast, Cervical and Colon Health Program. Yet, the cost of private insurance was too high. Paying out-of-pocket for cancer treatment was out of the question.

Undeterred, Veronica used her in-depth knowledge of the state and county public health system to find another cancer health program under which Yinha qualified. All aspects of her cancer treatment are now covered through Apple Health, Washington State’s version of Medicaid. Veronica also made sure Yinha had a copy of a breast health book that was translated into her native Chinese so she would be familiar with medical terms and able to ask questions when meeting with her surgeon.

Even now, Veronica is firmly advocating for Yinha and her future. “You will not feel well during chemotherapy and radiation,” Veronica explains, helping Yinha plan ahead for the days she won’t feel up to running her business. “You will need to have someone help you.”

She also reminds Yinha of a coming bright spot, “Next year, you will turn 65 and you can transition to Medicare.”

Yinha says she is lucky Veronica found a way to help her pay. Not just the surgery she knows is around the corner, but the years of drug therapy that will follow radiation treatment and chemotherapy. She is against the proposed changes in the Affordable Care Act that will further diminish access to health care for people in her income bracket and with preexisting conditions.

“Taking away the benefit people need most, that is insane,” she said. “Health care is a human right, right beside food and shelter.”

She envisions what she wants for herself and her future.

“I used to enjoy gardening. I would like to garden, to travel,” she said, her voice trembling slightly. “I was busy making a living and had kids. Hopefully I will have a chance again when I survive this.”