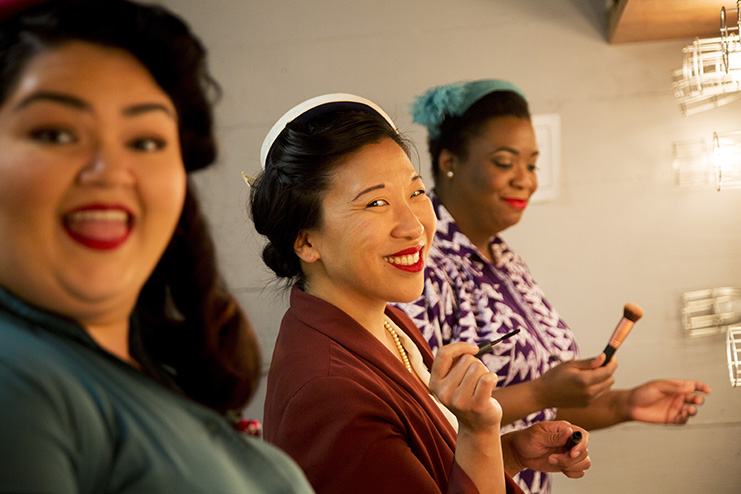 Porkalob’s idea for 7th and Jackson hails back to her college days, when she jotted down a single line brainstorming about a possible one-act play. “A little Chinese girl in Seattle’s ID who wants to be a jazz singer,” Porkalob reports that the line said. “She lives next door to a club and falls asleep every night lulled by the piano, the saxophone, and crooning of America’s next Lena Horne.”

Drawn to Seattle’s unique layout of neighborhoods, Porkalob began to wonder how they meshed. “Seattle had a very vibrant music scene from 1920s-1960s and Jackson Street was a hotbed of jazz houses, owned and operated by primarily Black business owners,” she said. “Adjacent to Jackson Street and more central in the ID were gambling houses and restaurants owned by the Chinese tongs, old families and gangs.”

Her research demonstrated a willingness to seek common cause. “You would always find bi-racial couples in the clubs, uncommon elsewhere in the city,” Porkalob said. “It was actually Black and Filipino activists working together who fought and won against the Miscegenation laws that Washington tried to pass in the 1930s.”

Porkalob’s interest in music led her to consider the dance halls as sites of community and resistance. “I was intrigued by the mixing of ethnic enclaves that happened in that area, specifically in the clubs,” she said. “I wondered what it would be like to have a friendship between a Black girl, Filipina girl, and a Korean girl impacted differently by the bombing of Pearl Harbor.”

In creating 7th and Jackson, Porkalob approached the work from many angles. “My writing style is directly impacted by my experience as a solo performer,” she said. “I play many different characters who interact via dialogue and as a result, the ‘beats’ of my writing are very fast, very efficient.”

That can be challenging for actors, as can her penchant to revise her own script while directing rehearsals. “A play isn’t literature so once my words are in bodies and in space, the story becomes more clear and I find that I often need less words,” she said. “Actors are sometimes hesitant to give up their words and producers are hesitant to keep changing the script, but in the end, it’s the right thing to do for the overall storytelling. My challenge is convincing them of that truth.”

But Porkalob said she expects her creative team not to just be pushovers. “I want curious minds, people who challenge the world I’ve created, and people who bring themselves fully to the roles,” she said. “I don’t want artists to divest themselves from their craft.”

She resists the old tenet of the actor as a “neutral vessel” into which a script and a character is poured without any hint of the actor underneath. “I don’t like that,” she said. “I don’t want that. I always want people to bring their authentic, full selves to the table.”

Porkalob also hopes that the audience will bring their full – and yet hungry – selves to the Café Nordo dinner table, as well. “Centering our audience is the most important aspect of the work,” Porkalob said.

She finds Café Nordo to consistently be a good venue for this goal. “They’ve developed a model of performance that works consistently for them and they’re very receptive to my playwriting and storytelling methods which are not linear and less traditional,” she said. “Each of the projects we’ve produced has built upon a platform of trust which leads to more fruitful, riskier collaboration.”

Porkalob also hopes that audience members carry their discoveries in 7th and Jackson forward to new explorations and wants to inspire people to dig deeper into their own local history. “I’ve found the best bits of history via old zines, old newspaper articles, church pamphlets,” she said. She also hopes the audience finds that history at the Nordo nightclub.