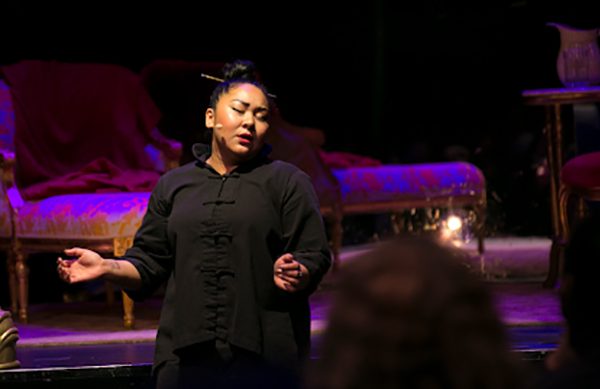 First and foremost, Sara Porkalob is an artist activist. Her award-winning trilogy, Dragon Cycle, is a feminist hero’s journey that turns Aristotilian, male-dominated storytelling conventions on their heads. Her matrilineal narratives span multiple generations and move beyond tired stereotypes to showcase complex and intersectional characters who are just trying to survive, and doing so with a lot of resilience and humor. Sitting with her long, jet black hair neatly slicked back in her signature high ponytail, it seems fitting for her to wear a nondescript gray hooded sweatshirt. The sheer plainness of her clothing doesn’t distract but directs one’s full attention to her enthusiastic expressions and passionately delivered f-bombs. This is a person who is unapologetically visible in her actions and equally transparent about the values that drive those actions.

The words “artist activist”, she says, are merely shells unless they are embodied with real action. One way this identity is manifesting itself in action is in her decision to ditch working with Netflix, the most popular and largest streaming service in the world. She was originally working on her soon-to-come TV adaptation of Dragon Cycle, entitled Dragon Baby TV, with co-collaborator Andrew Russell. “After reading about other artists that I really admire, like Michaela Coel, for example, it just sounds like the integrity of the work is jeopardized by working with such a big platform like that.”

Instead, Dragon Baby TV is on hiatus so they can focus on expertly crafting the last story of the on-stage trilogy, Dragon Baby. While the first two shows were pseudo-one woman shows, this production will be a musical with an ensemble cast. Until then, from January 26 through March 6, Porkalob will grace us with her final West Coast performances of the first two parts of the trilogy, Dragon Lady and Dragon Mama. She’ll be performing at Cafe Nordo before she flies to New York to workshop Dragon Baby for a week. She’ll then begin rehearsals for the Broadway Revival, 1776. Afterwards, She’ll transfer to Boston where they’ll open Dragon Baby with their producing partner, American Repertory Theatre (ART). Then, Porkalob will eventually head back to New York to appear on-stage as “Edward Rutledge” in 1776 until January 2023.

After taking almost two years off from live performance, Porkalob says that engaging with the work this time around feels different. A “queen of grind culture” by her own words, Porkalob reflected that she was deeply motivated by a sense of individualism. Burnout was simply a symptom of her can’t-stop won’t-stop attitude, not a sign to stop.

Porkalob realized, like so many of us did during the pandemic, that she wanted to shape her life around different priorities. She wants to prioritize her personal relationships over capitalism’s grind culture. “I just don’t want work to become the most important thing to me. Whereas, before the pandemic, it was.”

As a Filipina/Hawaiian/Chinese American woman, as a daughter raised by two queer moms of color (a Black mom and a Filipina mom) in a poor household, as a child born from a legacy of immigration, Porkalob’s innovative and nuanced storytelling style is greatly influenced by her own intersectionality. She holds both a deep empathy and an investigative scrutiny for each of these identities she houses within her own lived experience.

Porkalob pursued original work so she can see this more interwoven perspective of reality reflected in media. She’s already thinking of how she can push the envelope on representation in the near future. “My one aesthetic goal is to be like really fucking buff by the time I’m on Broadway next fall.” She also wants to get cast as a funny and “buff” character in a Tyco super hero movie, even if she only has a few lines and dies quickly. “Put me in a couple scenes where I get to have my fucking arms out to say some funny fucking lines. And I get to do a sword fight,” she quipped. “I want people to write articles like ‘Who is that buff Filipino bitch in this new movie?’”

While Porkalob is a writer-director-performer-leader dynamo today, she wasn’t always this person. Back when she was a theater student at Cornish college, she was afraid to be seen. “I didn’t want to be seen because I wasn’t seeing myself reflected in my circumstances,” she said.

It was one of her professors, Keira Macdonald, whose no-nonsense attitude pushed her to focus more on what she wanted and to practice letting go of what she feared. Her moms, who brought her up to be resilient, helped motivate her to confront her own life’s challenges. It was the community she leaned on while she was co-creating her shows that gave her inspiration. She operates in a very similar manner today when she found herself experiencing overwhelming panic about her uncertain future career and performing live again. “Now that I’m in it, and have really leaned on my community, and have seen a lot of support from my community members, I’m feeling a lot better.”

Dropping fear, panic and anxiety, Porkalob is determined to keep going, albeit differently than before. She heads toward her imminent multi-media takeover, using her intuition as a guiding star. “I just want to do the right thing. Whatever that means.”