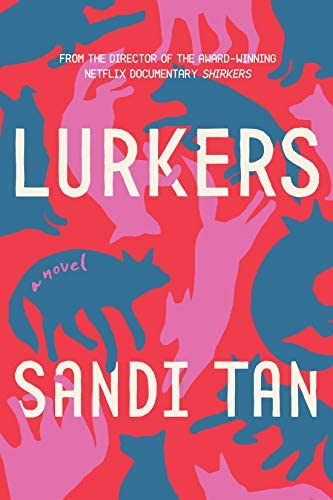 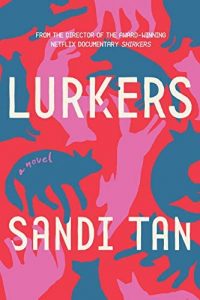 One never quite knows what to expect in Sandi Tran’s Lurkers. From the opening four sentences, a twist lies in “The only time Rosemary remembered seeing her father happy was when he was playing Vice City. Instead of jacking cars, shooting hookers and tussling with cops, he strolled along Ocean Beach, its simulated Miami beachfront, minding his own business. From the boardwalk, he would gaze out at the undulating orange waves. For hours.” Here, we have a man who wanders through a violent video game, seeking a “pedestrian ramp, staring out at the bay…” The juxtaposition of seeking out a scenic setting amidst such violence suggests a man capable of surprises, of complexities he himself doesn’t grasp.

Even his young daughters and wife don’t understand this man who commits suicide by slitting his wrists in the shower with a yellow handed box cutter within the first five pages. After his funeral, daughter Rosemary goes on to speculate “Maybe he just wanted to be someone else. You know?” With this Korean family, the reader is introduced to the first characters who live on Santa Claus Lane in Alta Vista. Amidst his belongings, Mrs. Park goes on to make a discovery. “It is paper,” Mrs. Park tells her daughters. “He write many story! But was secret. He never tell me! I not know!” But with titles like “The Dancing Banana Woman” and “Child Toucher” the girls “could have stopped here […] there was something morbidly enticing about reading such bizarrely bad writing—by somebody so close to them, and so dead.”

Mr. Park, his writing, and his death remain a mystery throughout the book. He was one of two characters that I personally wanted to know more about. He’s comical and tragic, never succeeding at anything in his life. The reader does learn a few other details—that Mr. Park earned an electrical engineering degree that could not guarantee him work, how he labored at his cousin’s tofu restaurant as a busboy until he was forty-two, how he married the only daughter of an embittered pastor and took over his father-in-law’s ministry. Sandi Tran uses the character’s death to upset the family’s stability. How will the wife and daughters pay their bills? Mrs. Park decides to sell the house and return to her family in Korea, but she lacks the necessary resources and ambition to accomplish this task. Plus, this is something that the two Americanized daughters definitely don’t want.

So begins a rollercoaster ride where the reader “lurks” and observes scenes where characters present one side to the world while harboring shady thoughts and motivations. This book is dark, compelling, dense, and very well-written as it takes on underage sex, grief, depression, and violence. Tran adopts an omniscient point-of-view that captures a sad, comic, yet honest tone. For example, when Mary-Sue “placed her blue pull-out couch on a set of wheels and rolled it across the street… Mr. Park received the kind gesture with a lot of nodding and a minimum of words…Little would Mary-Sue have guessed that as soon as she left his door, the blue sofa would be moved to the edge of his overgrown, disheveled backyard.”

There’s never really a dull moment in this novel. As with riding a rollercoaster ride, there is a buildup of potential energy on hills and drops, an acceleration and g-forces on loops and turns. Both a strength and a weakness is that the reader doesn’t have a chance to turn away to catch a breath, only to just hang on.

After establishing the Park family, other characters and their stories pile on. A second neighbor is Raymond van der Holt, a writer of “blood epics” that have become international best sellers. Yet another family is Mary-Sue Ireland who adopts three-year-old Kate with help from Friends of the Children of Vietnam. Kate survives a cargo plane that crashes and plunges into the rice fields—“155 out of the 328 on board were killed, 98 of them infants and babies.” Further characters include Mr. Byrce Zehring, or Mr. Z, a drama teacher; Arik, Rosemary’s classmate; Brittany Ann Yamasato, and more.

The way the events involving this cast add up can be perturbing. Despite a climax and resolution, the characters’ lives do not change significantly. The reader drops in, observes, and then pans over to the next character. Yet this is the interconnecting tale of those who live on Santa Claus Lane, a street full of craftsman style homes in the suburbs of LA, during the 2000s.

At the heart of Lurkers is a quote by Johan Huizinga from The Waning of the Middle Ages: “So violent and motley was life…The men of that time would always oscillate between the fear of hell and the most naïve joy, between cruelty and tenderness….always running to extremes.” Thinking about this quote, I can see what the author was striving to do and I am impressed with the result. Sandi Tran’s characters demonstrate a broad range of extremes—within each character’s personality and with their relationships with others. Tran is a talented writer, delving into the experimental with her deft use of satire. But her novel, for this reader, was an uncomfortable up-and-down read.