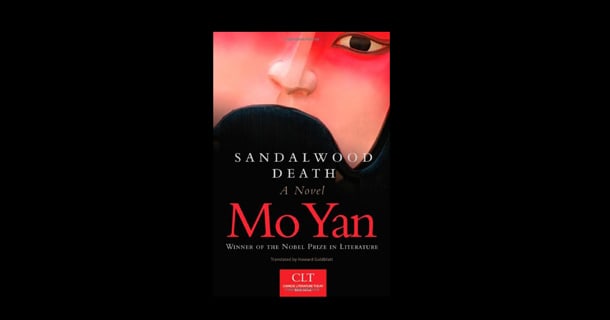 In his novel Sandalwood Death, Nobel Prize-winning author Mo Yan lavishes 15 pages on a Qing Dynasty executioner’s self-described “masterpiece”—the slicing death of a handsome young officer, the failed assassin of one of Chinese history’s most corrupt generals. The executioner’s goal is to make precise, even slices that keep the defiant victim alive until the 500th cut. Here’s the first cut:

“Without warning, [Zhao Jia] drove his fist into Qian Xionfei’s chest directly above the heart. Qian’s eyes rolled up into his head, and before the effect of that blow had worn off, with a quick circular motion of the hand holding the knife, Zhao snipped a circle of flesh the size of a bronze coin off of the other the side of Qian’s chest. He had neatly excised one of Qian’s nipples, leaving a wound that looked like a blind man’s eye.”

Little wonder that Mo Yan, who has written a shelffull of novels mostly about the peasants of his native province of Shandong, China, calls himself a storyteller. Controversy surrounds his Nobel Prize because Mo Yan has not been an outspoken critic of the Chinese government (although some of his books were banned initially). Mo Yan, whose chosen pen name means “don’t talk,” says he prefers to let his writing speak for him.

Sandalwood Death, translated from Mandarin by Howard Goldblatt, (University of Oklahoma Press, 2013), is the Homeric tale of a folk opera troupe leader, Sun Bing, who is transformed by the barbarism of the dying Qing Dynasty into the mystical leader of a ragtag army of Righteous Fists. It takes place during the so-called Boxer Rebellion, that moment when Chinese peasants who feared the building of railroads across their ancient landscapes convinced themselves that through martial arts training and purity of mind they would be impervious to the lead bullets of Europeans. When the rebellion is crushed, the reign’s leading executioner, Zhao Jia, is commanded to devise the cruelest, most prolonged death imaginable for its leader.

He relishes the challenge. Over a long career Zhao Jia figures he’s beheaded a thousand common thieves and out-of-favor court officials. His small, red, claw-like hands can make a pan of water boil.

But here’s the joke, albeit a very black one: all the executions are told from the point of view of the executioner, who by long tradition bears the title “Grandma,” and who longs to turn his despised trade into an art form. Grandma Zhao believes, “The finest play ever staged cannot compete with the spectacle of a public slicing.”

Here is the execution by Yama’s Hoop of a young eunuch, with lovely eyes, who stole his aging emperor’s gold-barreled fowling piece. As the Emperor and his court look on, a gleaming iron hoop is alternatively tightened and loosened around the young man’s head. When the youngster quietly pleads with his executioner to “make it quick” Grandma Zhao thinks to himself, “At a time like this, who cares what he wanted?” The young eunuch’s chilling howls are ignored, but when he shits his pants, it’s time to bring the act to its conclusion, lest the stink reach the Emperor’s nose.

Mo Yan, whose earlier novel Red Sorghum Clan became an international hit film directed by Zhang Yimou and starring Gong Li, cannot understand why no director has yet to seek the movie rights to Sandalwood Death.

The real wonder is why no contemporary Mozart has taken the story to the opera stage where it belongs. The made-for-opera plot has starring roles for five principals, each driven by unfettered passion and notions of filial duty. There’s the beautiful Meiniang, who makes her living selling fatty dog meat and strong spirits; her simple-minded husband, whom she is cuckolding; her lover, the feckless Magistrate, who must carry out the execution of her father; her father, the opera singer turned rebel; and, of course, the executioner, Grandma Zhao, who is revealed to be the father of Meiniangs’s husband. Got all that? Just keep glancing at your playbill.

Each tells his or her story via virtuoso flashbacks. Strong smells of fatty dog meat and worse, the shrieks of torture and the Shandong folk opera chorus’ cat-like howls and hisses, and richly drawn characters sweep the reader along to the awful, tragic, and foregone climax. But the meaning of this story that makes a mockery of senseless cruelty, if any, is left securely to the reader’s own imagination.