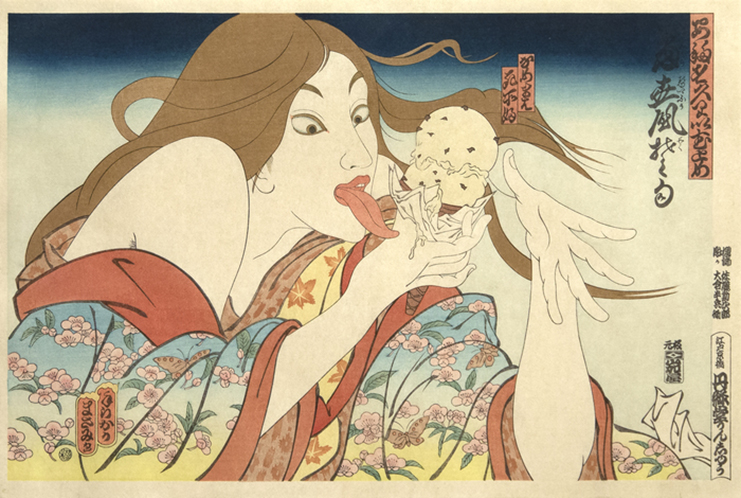 This ambitious exhibition attempts to bring to light several important artists from Japan and American artists of Japanese ancestry, these artists include Isamu Noguchi, Yayoi Kusama, George Nakashima, Sadamasu Motonaga, Tadasky, Ruth Asawa and Masami Teraoka. The exhibition includes works on paper, sculpture, painting and examples of textile art. Most of the artworks date from the mid-twentieth century and show influences of surrealism, abstract expressionism, op art and the Gutai movement from Japan. All the Japanese American artists were incarcerated and detained in WWII prison camps.

Yayoi Kusama, perhaps the most famous artist in the show, is represented by several works dating from the 1950s to the 1980s. ‘An Island’ (1955) is a small gouache and is an early example of her obsessive dot technique; ‘Increment in Spring’ (1986), a wooden box of stuffed fabric, alludes to the work of Joseph Cornell with whom she was associated. Kusama is known for her installations, performance and forays into fashion. These small-scale works reveal a more intimate glimpse of the artist’s hand.

There is a small intriguing sculpture by New York-based Isamu Noguchi. Noguchi is certainly one of the great geniuses of the 20th century and created an incredible body of work as well as furniture and landscape sculptural projects. The untitled work is made of balsa wood and concrete and is an unusual example of his work and reminiscent of sets he designed for Martha Graham in the 1940s.

George Nakashima, the master woodworker, has several examples in the gallery and is showing the iconic gravity-defying two-legged Conoid chair. Also included is a desk, a console and a cocktail table. His style of woodworking incorporates beautifully selected walnut slabs, unfinished rough edges and Japanese joinery techniques.

Gutai was Japan’s most famous international post-War art movement. It stressed free expression, new material, new techniques and a new art. Sadamasa Motonaga was one of the early members of the Gutai movement. His small untitled 1966 is a wonderful example of his painting style generated by chance effects, tilting his canvas and pooling paint.

What at first glance looks like a traditional 19th century ukiyo-e drawing by Kuniyoshi is a 1984 work by the witty Masami Teraoka. ‘Study for Tokyo Jogging Samurai’ (1984) depicts a seated semi-clad man from the backside attired in a fundoshi. He is putting on running shoes. This shows Teraoka’s masterly brush control and knowledge of traditional iconography.

Kay Sekimachi, the acclaimed Bay Area fiber artist and educator, is represented by ‘Ogawa ll’ (1969), a fine example of her use of translucent nylon and multi layered veiled hangings. Two small bowls are made of antique Japanese paper are both rough and refined and recall the ceramic work of 19th century Buddhist nun Rengetsu.

The most junior artist here is San Francisco artist Masako Takahashi showing a group of small oil on canvas abstractions from the 1960s. With vigorous brush work, dark brooding palette and full of angst, her paintings evoke the ethos of Bay Area abstract expressionism, the dominant style of the period. Masako’s current direction is shown in the silk dyed banner embroidered with the artist’s own hair.

With it’s modulated and subtle color, ‘Fireworks at Night’ (1955) by the newly rediscovered artist Emiko Nakano balances traditional Asian brush work and the abstract art of the time and recalls some of the work of Morris Graves and artists of the Northwest School.

We Were Always Here is a provocative title, it’s both a whisper and a shout-out, despite some omissions. It is a valiant effort to bring the accomplishments of Japanese American artists to a broader audience. Museums, academics and art lovers should take notice.

We Were Always Here is at the Heather James Gallery in San Francisco from April 4 – July 15.