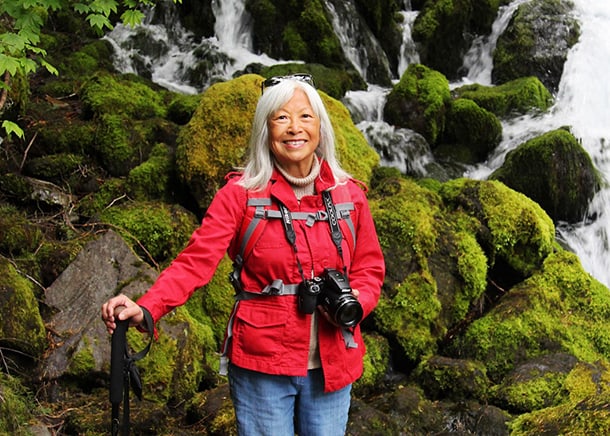 “I never really panicked and just took it all in stride,” Sajean Geer said about getting lost in the woods of the Olympic Peninsula with her dog for six days in July, while on a trip to spread her husband’s ashes. Geer, a 71-year-old Chinese American woman, survived by scavenging for pine needles and ants and drinking creek water. She built a makeshift shelter and snuggled closely to her dog, Yoda, at night as temperatures dipped into the 40s. After six days and seven nights, Geer was rescued by a search team sent to find her. Geer’s calmness in the face of a life-threatening situation was merely another example of her fierce independence and strong self-reliance instilled in her from a young age by her Chinese father.

“My father raised me to be very independent and self-sufficient,” Geer said. As a young child growing up in Seattle, Geer’s father allowed her to walk all over the city alone. She recalled one day when she was walking with her father, and she got distracted and hit her head on a parking meter. Although she started crying uncontrollably because of the pain, her father did not comfort her but rather waited for her to finish crying. Once she finished crying, he said, “Next time, watch where you are going.” Another time, after coming home bruised and clearly shaken from a fight at school, Geer’s father looked at her and said, “You are small. Use your head.” Geer’s father was suggesting that given her small stature, using her intelligence would be the only way for her to be self-sufficient. Geer thanks her father for instilling self-sufficiency and independence in her, which were ultimately key ingredients that allowed her to survive in the woods.

Geer’s father’s own difficult experiences through the turbulent 1930s and 1940s influenced his resolve to make his own daughter self-sufficient and independent. An immigrant to the United States in the early 20th century, Geer’s father could not bring his family to the United States due to immigration restrictions against Chinese women and children under the Chinese Exclusion Act. He returned to Guangzhou, southern China, in the 1930s to rescue his family from the Japanese invasion. On the way to British-controlled Hong Kong, which was a haven for Chinese refugees, Geer’s father was horrified by the number of babies and small children abandoned on the roadside. He also noticed that the children who survived were able to keep up and make themselves an asset to the group. Feeling supremely guilty about not being able to help the children on the side of the road, he resolved to train his own daughter to be independent and self-sufficient to survive difficult experiences on her feet.

Geer emphasized that her father’s parenting approach was quite unique both for the time period and within the Chinese American community. Geer and her family left China for Seattle in 1949 after the communist victory in the Chinese Civil War and the repeal of the Chinese Exclusion Act. Geer was a toddler at the time. Geer said her mother and others within the Chinese American community were openly against her independent mindset. They expected her to stay at home, take care of the house, assist with the family laundry business, and eventually marry a Chinese man. Instead, Geer earned a college degree from the University of Washington, hitchhiked across Europe for three months in 1969 with a female friend, and eventually married a non-Asian, Jack Geer, with whom she did not have any children (although she developed a close relationship with Jack’s son, Joe). “I always felt a lot of pressure from the Chinese community to date and marry Chinese men and to lead a traditional life raising a family,” Geer said. “I really was my father’s daughter, raised to have an independent mind and be self-sufficient.”

While Geer experienced pressure to conform from the Chinese community, she praised Chinese and Asian community values that emphasize self-respect, hard work, and the importance of education. “Asians recognize that life is not easy,” Geer said. Geer believes Asian children have an advantage as they are inculcated with critical values from a young age.

Geer’s extensive outdoor experience is another reason why she was able to calmly face her predicament in the woods. Geer has been to both sides of the Everest base camp and spent three months trekking in the Himalayas. She and her husband were also regular hikers in the mountains near their Port Angeles home near where she lost her way for six days and seven nights. “I’m completely comfortable in the outdoors,” said Geer. “Being lost in the woods was simply another adventure.”

Geer currently lives on 5 acres of land in Port Angeles. She remains active in the outdoors and travels regularly. While deeply saddened by the loss of her husband, the self-sufficiency and independence instilled by her father will no doubt see Geer through to the next phase of her life, in the same way they got her through her adventure in the woods.

Editor’s note (9/18/17 at 6:52 p.m.): Changes were made to correct the amount of time Geer was lost to six days and seven nights. Also a correction to note that Geer lives on 5 acres of land.