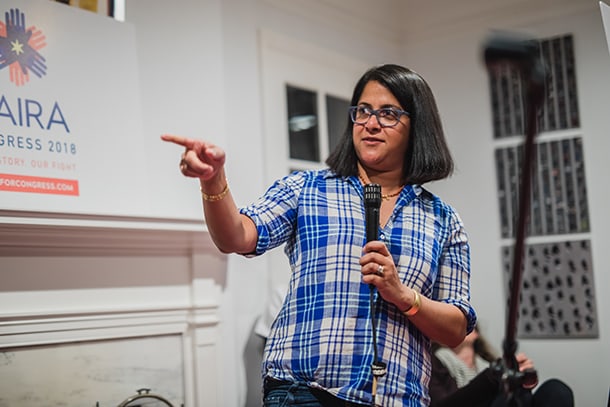 Prior to the 2016 election that stunned the world, Saira Rao, 43, first-time congressional candidate from Colorado’s first district in and around Denver, could have stood as the classic, almost clichéd Indian American political candidate: graduate of NYU Law School, clerk on Philadelphia’s Third Court of Appeals, lawyer for the Wall Street firm of Cleary, Gottlieb, Steen and Hamilton. Her parents, both doctors, were immigrants to America: her father from Mangalore, her mother from Coimbatore.

Her politics were no less typical: “I was a total centrist Democrat. A Hillary supporter through and through.” Rao has emerged as the most radical of the unprecedented wave of first time Indian American candidates running for Congress in 2018.

In the desolate space President Trump’s victory opened inside her, and inside many Democrats, a new political being was born and with it a new identity. Rao’s attention, previously fixed on white liberal Democrats, latched onto disillusioned black, Latina, Asian female Democrats bitter about their support for the party being taken for granted, and their key issues (racism, poverty, health care, immigration) ignored.

In her open letter to The Huffington Post (12/16/17), titled I’m A Brown Woman Who’s Breaking Up with The Democratic Party, she begins with the poignant words, “You were the love of my life.” Citing her votes for Bill, Barack, Hillary, after whom, in college, she named her ficus tree, she concludes, “I realize now that the love has been one-sided, unrequited. You have never recognized me as a brown woman. You have taken my love, my money, my tokenism, with nary anything in return. You married the white woman and hooked up with me on the side.”

Excoriating the party on immigration, she asserted: “For all your talk about Dreamers, there’s been little action. [Campaigning, Rao demands a clean Dream act.] You don’t seem to give a crap about kids of color who will be kicked out of this country, the only country they know. What if all those Dreamers were white? I suspect there’d be a very different outcome.”

In her own Democratic-controlled Denver area, she cites undocumented residents fearful not only of seeking health services, but of picking up their children from school, not knowing if they themselves will be picked up by ICE.

“When ‘the other’ is demonized, that affects all of us.”

In March this year, she clarified her re-entry into the party with KPFK journalist, Sonali Kolhatkar, claiming it was the party establishment she broke from. She has come back because, “I think progressives can take the party back.”

The challenger to liberal Democratic Congresswoman Diana De Gette, Rao still knocks on the same doors she knocked on when canvassing for Hillary Clinton, but with a different message. Like many radicalized women running for Congress in 2018, she speaks out for a single payer national health care system and against the “dark money” of corporate PACs (she herself takes no corporate PAC money) like those of the insurance and pharmaceutical companies whose exorbitant prices drive up the costs for medical treatment and medicine. And she boldly calls on her constituents, as decent Americans, to side with those who suffer racism and are threatened with deportation.

If her activism on behalf on racial justice is belated, and fierce (“Where is your outrage over the national epidemic of police brutality against black people?” she demands in the Huffington letter), it is because she herself suffered racism growing up in Richmond, Virginia. Her peers tormented her with war whoops. Her father was mockingly called “the chief.” Her mother had to endure the “n word” at work.

“My mom was the single most important influence in my life. She had rheumatoid arthritis, and every single day during the eighties I’d watch her putting on her sari with her crooked hands and go to work at the VA Hospital.”

That would certainly apply to Rao. With race a guaranteed third rail issue in American politics, Indians candidates are usually careful not to let their brown-skinned candidacy incite voter misgivings. Rao for her part openly supports Black Lives Matter.

Broadening her identity without abandoning her Indianness (She was present at the last Holi celebration in Denver, and is proud of the strong sense of community that typified Indian life in Richmond) is her way of responding to the surge of American tribalism at the core of the Trump presidency.

How do the people of the first congressional district respond to a progressive Indian candidate?

“This is a very diverse district,” Rao says with her almost girlish enthusiasm. “It consists of lots of Latinos and black folks, lots of brown folks. They are very enthusiastic about meeting me and hearing what I have to say. Rich white people, who in my district are very pro-Democratic Party, are not. My aim is to motivate those folks who feel they have been disenfranchised, who feel it doesn’t matter who they vote for, nothing will change. Many of them are progressive young people of color. I want them to know that I am beholden to them, to ordinary people, unlike more traditional Democrats who take money from the big corporations and are beholden to them. “

Rao will still have to make significant inroads in the first district’s 74-percent-white community if she is going to stand a chance. To her advantage, the current national mood of anti-incumbency might help. Her opponent has been entrenched in office since 1997 and is the longest serving House member from Colorado.

“Looking at the congressional picture, we have nine folks in Congress. Every one of them is white. That is not representative of Colorado. We have never had a woman of color from Colorado. I would be the first woman of color elected, let alone the first Indian.”