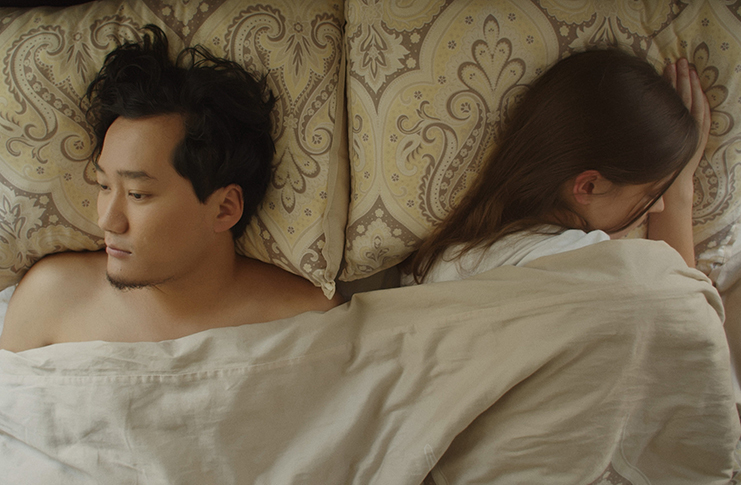 In her essay “The Problem of Marital Loneliness,” one of the most read New Yorker stories of 2021, Agnes Callard observes, “Marriage is hard, even when no crises loom, and even when things basically work….  The very closeness of marriage makes every bit of distance palpable.”  In the opening sequence of Bishrel Mashbat’s Beloved, we are introduced to a marriage where an interracial couple, Anar (Iveel Mashbat) and Kassy (Jana Miley), are trying to keep the basic things in their marriage work, but the distance between them is unremittingly palpable.

Set against Chopin’s melancholic Op. 28 no. 4, the establishing shot of an open window with a billowing gossamer drape gives us a glimpse of an orderly living room. The quiet of the opening shot is juxtaposed with a series of provocative paintings (the first three of which we later see hanging on the wall of Anar and Kassy’s apartment) – Francesco Hayez’s The Kiss, Joseph Wright’s Romeo and Juliet, Henry Fuseli’s The Nightmare, and a painting of Mongolian horse archers in battle – that seem to foreground the themes of doomed love, sexual angst and racial and cultural differences. Anar and Kassy complete their morning routines without much conversation. They each look at their phone while eating breakfast together, their silence interrupted only when Kassy, an aspiring actor, makes a terse request to have the car for her audition.

While a sense of listlessness plagues their marriage, Anar and Kassy seem to be bond to each other by a sense of mutual obligation. Anar prepares breakfast and pours a glass of water for Kassy while Kassy washes the dishes and vacuums their apartment. Watching them carrying out the mundane but necessary routines of a marriage, one wonders what their relationship was like in its early stages when they were first forming their shared rhythm, what brought them together, and what drove them apart.

The film does not set out to provide clear answers to why Anar and Kassy’s marriage is on the brink of dissolution. Instead, it scatters a few details throughout the film, prompting the viewer to piece together the possible causes. The messages that Anar and Kassy receive from their families, friends and the culture at large are ones that anticipate their interracial relationship to fail. Anar’s friend’s wife keeps suggesting that he would be better off with a Mongolian girl, while the radio program that Kassy listens to bluntly tells her, “No matter what color you are, you should marry your own to keep the culture alive for the next generation.”

Yet, it is not until the end of the film that Anar and Kassy have a frank conversation about the role that race and culture have played in their marriage. Kassy reveals feelings of isolation when hanging out with Anar’s Mongolian community because she only speaks English, while Anar shares that he had overheard Kassy’s father berating her for not marrying a nice Christian boy when she took Anar home for the first time. They both seem surprised by what the other has to share. Given the messages about interracial relationships that they have been receiving as mentioned above, I find it difficult to believe that Anar and Kassy have not shared their feelings with each other and anticipated the challenges they may encounter earlier in their marriage.

The film’s attempt at creating a complex portrait of a marriage that invites contemplation about love and human connections is admirable, but the lack of in-depth examination of who the characters are and the ellipses in the various threads of the film make it difficult to feel connected to the characters and their story.