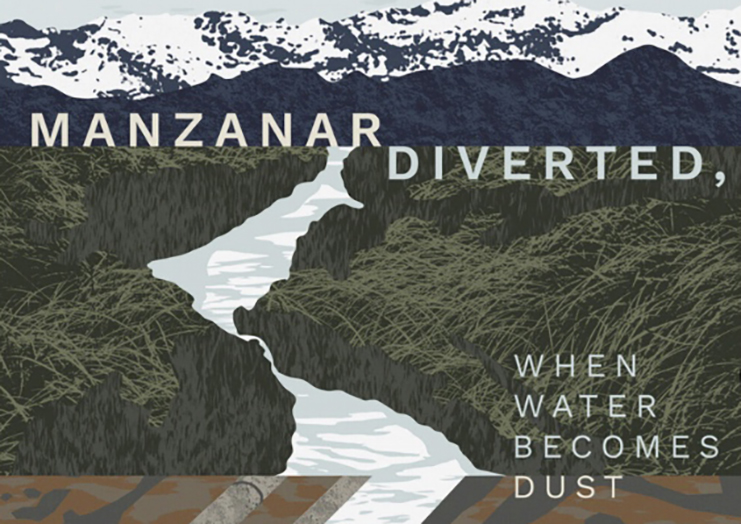 “Our lives are not our own. From womb to tomb, we are bound to others, past and present, and by each crime and every kindness, we birth our future.” – Cloud Atlas, David Mitchell

We are, all of us, connected. Not only to one other, through our familial bonds, friendships, romantic partnerships, but to nature around us. We are connected to the land, to the animals, to weather patterns and the flowing of fresh water. By our very nature, humans seek out these connections, these bonds with one another. Our own wellbeing depends on the welfare of others and the health of the environment as a whole.

This is one of the central ideas of the documentary Manzanar, Diverted: When Water Becomes Dust, by award-winning independent filmmaker Ann Kaneko. This documentary not only explores the ugly history of the Manzanar concentration camp and the incarceration of Japanese American citizens there, but the rich history of Native Americans in the region, the struggle over water rights, and the efforts of environmentalists. These issues and groups all intersect at Manzanar.

Manzanar, Diverted is a collage of interviews, drone footage of the landscape of Manzanar, historical footage. This audio-visual tapestry comes together to weave a grand and ambitious story of hundreds upon hundreds of years of history in the area, from the Native tribes to the incarceration of Japanese American citizens to the Los Angeles water wars. Kaneko attempts to tie all of this together, to show the connectedness between what may seem, at first, to be many disparate individuals, groups, and issues, both political and ecological.

Manzanar is located within the Owens Valley (or Payahǖǖnadǖ, as the Native groups in the area call the area) at the foot of the Sierra Nevada mountains. Once a place of free-flowing, fresh water and lush plant life, it’s been transformed by modern human intervention into a dangerous, dusty desert, sucked dry by the need for water in Los Angeles.

Manzanar is a place of forced removal, as one interviewee mentions. Long ago, the U.S. government forced the Native Americans from the land and forced Japanese Americans onto the land, while also forcibly extracting as much water from the area as they could. There’s a lot of painful history to examine here, and the documentary does its best to capture it all.

There are some truly fascinating connections made by the documentary as well. Lake Patsiata, in the valley, had nearly been sucked dry by 1926. By the time the concentration camp was set up in the 1940s, dangerous particulates would blow from the dried-up lake and damage the upper respiratory systems of the internees, leaving them with sometimes life-long breathing problems. The fight for the land and for water not only harmed the Native Americans, but the Japanese Americans as well.

Water was also a source of resistance for the Japanese Americans forced into the concentration camp at Manzanar. They had to grow their own food, but they also plant gardens, build fish ponds, and soak in the showers. Some would even go trout fishing in the area, assisted by the Native Americans.

The documentary, as it moves more firmly into the current day, asks big questions about the Los Angeles Department of Water and Power, or LADWP. What are the limits to its power? And who owns the water? Can anyone own the water? And, more importantly, what can any of us do about all of this?

Manzanar, Diverted is an ambitious documentary, looking to tie together centuries of history as well as the experiences of a vast array of different people. It tries to explore the interconnectedness of everything, between painful histories between the US government and its citizens, our current ecological problems, and the way that the environment and the systems and infrastructure that we build all react and respond to one another. Our problems, our lives are never just our own. Everything that we do has far-reaching consequences that can affect people we may never even think about in our daily lives, and that the choices we make can reverberate throughout history.

Because it’s so ambitious, not everything works perfectly. The beginning can feel very disjointed and perhaps even information-dense at first, if you’re not already familiar with at least the basics of the history of the area. There’s so much overlapping history here that it’s naturally a struggle to bring it all together, but as it starts chugging along, the overall effect is quite impressive. Several points are hit upon over and over again to drive their importance home – the ecological devastation in the pursuit of water for LA and the interconnectedness of the different groups in the area, throughout history.

On a personal level, I am Japanese American. Though I have no direct ties to Manzanar, my grandparents and great-grandparents were forced into concentration camps during World War II. On that level, in seeing that awful history put into a larger context, I think the documentary really works for me. It’s a powerful, emotional journey at times, but one that is well worth the watch.