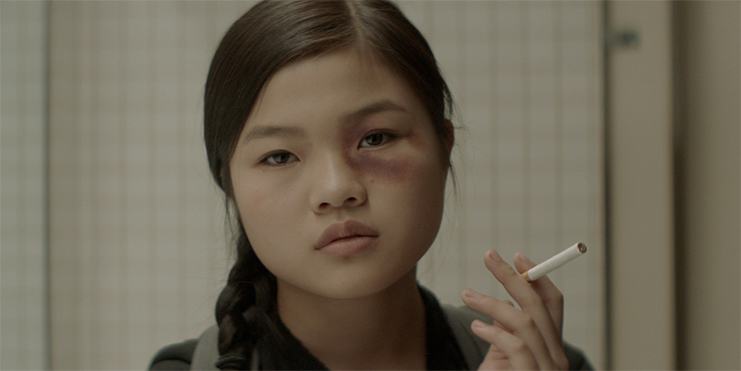 “Magic is about making an audience feel something,” imparts the eccentric magician Margot (Rhea Perlman) in Kate Tsang’s film Marvelous and the Black Hole to Sammy (Miya Cech), Margot’s accidental apprentice. The success of a magic act, according to Margot, hinges on finding a story as its emotional core.

Sammy, the film’s 13-year-old protagonist, is no stranger to the magic of story-telling. The recording of her mother’s story, a whimsical twist on the Chinese myth of the moon lady, helps to quell Sammy’s anger and loneliness after her mother’s death, especially when her loving but overworked father Angus (Leonardo Nam) finds a new love interest (Paulina Lule) and her sister Patricia (Omachi Kannon) is lost in her own world of RPGs.

Frustrated by Sammy’s angry outbursts and delinquent behaviors and wishing to instill in her a sense of responsibility, Angus enrolls Sammy in a business class at a community college and threatens to send her to a camp for difficult youths, which Sammy imagines as a military-styled bootcamp, if she does not comply. It is at the community college where Sammy first meets Margot, who, as we learn later, carries tremendous losses of her own.

After Sammy reluctantly interviews Margot at the request of Sammy’s teacher (Keith Powell) for a class project, an unlikely friendship gradually blossoms between these two spirited characters. Margot teaches Sammy to find her own voice through magic tricks, while Sammy challenges Margot to face her past. They inspire each other to face their own vulnerability and find healing and joy in their friendship.

Tsang’s film skillfully connects the threads of magic and storytelling. In the story that Sammy’s mother told her, a beautiful empress, envied by the gods, is exiled to the moon, where she meets a space rabbit. Hostile toward each other at first, the unlikely pair soon recognize that they are not so different once they start to share stories. When Sammy learns about Margot’s tragic losses, she begins to recognize their similarities and is empowered to breathe new life into her mother’s story, turning it into the anchor for her magic act, like the way that Margot has been encouraging her to do.

While films about magicians have mostly focused on men (The Prestige and The Illusionist come to mind), it is refreshing to see a story that centers women magicians in which magic does not serve as a tool for power and competition but functions as a creative outlet for expressing emotions.

Supported by a stellar cast, Cech and Perlman deliver superb performances. Their on-screen affection for each other in palpable. The scenes where they perform magic and make mischief together are affecting and delightful. Their friendship and stories will resonate with audiences for years to come.

Marvelous and the Black Hole plays at a drive-in screening at the Stonehouse Cafe on Friday, March 24 at 7 PM. There are limited tickets.