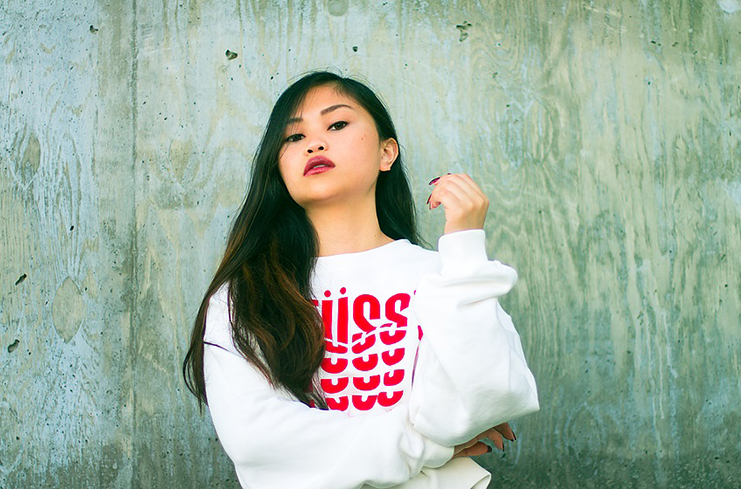 Asian American artists have been actively contributing to the music industry for years. Just to name a few, huge stars like Bruno Mars, Steve Aoki, and Jhene Aiko are all musicians of Asian descent. But one might not realize that from listening to their music or following their public personas. Looking forward to the future of Asian American music requires going beyond representation alone — there are Asian Americans in the music industry, but what does it mean for music to be Asian American? The difference between now and five or ten years from now might be a question of artists looking more closely at issues of identity, as well as reckoning with the status of Asian Americans in the overall cultural landscape of American media. SAAFF’s Opening Night Party performers each demonstrate the artistry and emotional gravity of riding that curiosity in new musical directions.

Rapper Ruby Ibarra, who will be performing at the Opening Night Party, exemplifies this fresh unconventionality through her fusion of identity-based storytelling and technical skill. The title of her most recent album, Circa91, refers to the year her family emigrated from the Philippines to the United States. They settled in the San Francisco Bay Area, home to one of the largest Filipino American communities in the country. Even in a purportedly diverse city, however, Ibarra grew up watching her parents being treated like outsiders in America. As a direct challenge to a personal history of discrimination, Ibarra made a conscious decision to integrate Waray, Cebuano, and Tagalog in her music, all of which are spoken in the Philippines.

Perhaps what is most inspiring about Ibarra’s music is her adamant and uncompromising dedication to empowering Asian American women. She made her directorial debut with the music video called “US,” which is a collaboration with rappers Working Klass Klassy, Rocky Rivera, and poet Faith Santilla. The project highlights the contributions Filipino Americans have made throughout feminist and labor history. Her uncompromising dedication to resistance and justice in her music showcases the electric strength of hip-hop as a genre to address critical sociopolitical issues in American life.

Complementing Ibarra’s fiery lyricism, audio-visual installation artist Jyun Jyun will also perform at the Opening Night Party. Louis Chinn is a musician, multi-media artist and educator who records under the name Jyun Jyun. His hybrid performance combined videography, dance, and music evoking both global electronic and traditional Asian instrumentation. The themes of ancestry, nature, and transformation come through in his work, which does not reduce or homogenize in its pursuit of connecting its audiences. Jyun Jyun’s performances articulate how layered those ideas of belonging and family history can be.

While being an Asian American artist does not mean that aspects of that identity necessarily need to be present in the work you produce, how an artist explores their Asian American identity is nonetheless significant to Asian American listeners. Even though I enjoyed both Japanese Breakfast albums before reading Michelle Zauner’s 2018 New Yorker article “Crying in H Mart,” learning about her relationship with her mother and Korean ancestry allowed me to appreciate her music more deeply. Even though I knew I would see her perform at the Seattle Asian American Film Festival’s Opening Night Party about a month later, I bought tickets to a Japanese Breakfast concert this past January when I visited my friend in Baltimore. The crowd’s energy was high from beginning to end, peaking when Zauner jumped down from the stage momentarily and danced among the people in the front.

Her enthusiasm reminded me of teenage evenings spent spectating at DIY shows in suburban Michigan youth art centers, where tenth-grade lead singers hurled themselves into mosh pits. While I enjoyed those experiences for the most part, I also recall moments of feeling distant and alien while watching a band that did not look like me, surrounded by a crowd that also didn’t. As Japanese Breakfast closed out the show with slow-burning Flaming Lips cover, I thought about how dreamy and unthinkable this performance would have seemed to me at that age.

Zauner, who identifies as Korean, said she chose the name of her project because the combination of words “sounded kind of curious, like something that sounded really American and well-known…with something that I think American people just associate with something exotic or foreign.” The show at the Baltimore Soundstage encapsulated that curious pairing through its optics, with Zauner as an Asian American woman leading a performance in a genre long dominated by white male creators. For Asian American women like myself, it’s rare to find an artist who you know has also struggled with feelings dislocation and thrilling to see her succeed in spite of, or perhaps because of, those experiences.

For all the artists featured in SAAFF’s Opening Night Party, listeners don’t have to be Asian American to love their music by any means, but it certainly means something special to those who are.

SAAFF’s Opening Night Party is on Thursday, Feb. 21, at 9:00 PM at Washington Hall. Get tickets here.