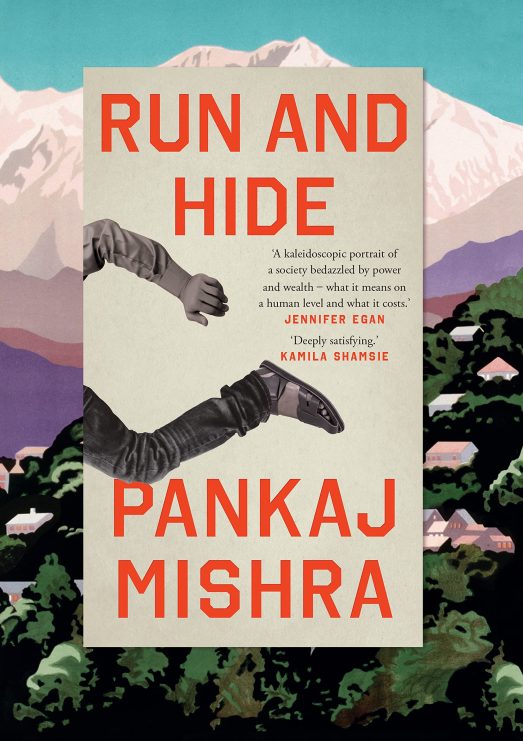 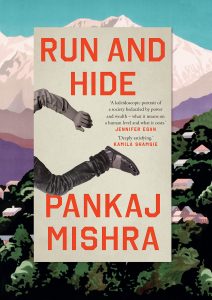 Pankaj Mishra sets his recent novel, Run and Hide, within the context of India’s rise to global economic power, its Hindu fundamentalist politics, and its growing global presence in the technology industry.

The story, narrated by the character Arun, tells of three friends who met at the prestigious Indian Institute of Technology (IIT), and whose bonds were forged in the context of hazing rituals. After graduation, each of them goes their separate ways, and two of them, Aseem and Virendra, rise to immense wealth and power but end up losing everything because of corruption and criminal behavior.

Arun takes an unusual path and becomes a writer and translator who moves to a Himalayan village seeking solitude. Arun narrates the story of this trio to Alia, a cosmopolitan Muslim woman, who is writing a book about them. What makes this narrative compelling is not the story line but the deep reflection on the state of India, its corruption, the decline of its democracy, and the impact of globalization told by a man whose life began in poverty. Through Arun, Mishra captures both the promise and allure of globalization and the failure of that dream for those who do not have social and cultural capital because of their caste, religion or class.

Arun tells Alia and the reader of his childhood in grinding poverty. His father runs a tea stall in a small railway station and the family lives in a run-down shack with limited space and no indoor plumbing. The mother works hard on her domestic chores while being dominated by her aspiring husband who puts all his efforts in educating his only son to enter IIT.

The IITs, which were set up by Prime Minister Nehru just after independence to build India’s technical prowess, have the toughest entrance exams in the world. A very tiny fraction of those who take the exams get admitted to their prestigious engineering programs that are heavily government subsidized. An IIT education is so sought after that families spend their life savings to send their sons to tutoring classes to prepare for the entrance exams.

IIT graduates in the last several decades have gone on to graduate education in the United States and then become tech entrepreneurs in Silicon Valley, Seattle, New York or have returned to India to establish major corporations.

The IITs played a significant role in the post 1965 emigration of Indians to the United States. What the model minority success story does not reveal is that IITs are male dominated and have very few women alums. Additionally, despite an affirmative action program, the IITs are also bastions of upper caste privilege. Wealth, cultural and social capital arising from India’s discriminatory caste system translates into access, wealth and privilege in the South Asian diaspora especially in the United States.

When Arun, Aseem, and Virendra are new students at IIT, they are subject to horrendous hazing that includes sexual abuse. These young men survive the abuse and two of them go off to become global success stories. Arun, recognizing that he belongs neither in the world of his parents nor of his classmates, retreats to a small village in the Himalayas to become a modestly successful editor, writer and translator. He brings his mother to live a tranquil life until it is interrupted by the arrival of Alia.

Alia comes from a wealthy cosmopolitan Muslim family and connects with Arun in the Himalayan village where her family has a home. What begins as a relationship between a writer and her interview subject quickly morphs into a romantic relationship, and Arun enters her world of glamor and wealth in London. For a few months, Arun’s escape from his dreary and lonely life is exciting, but soon despair and anxiety about his place in the world return, and he retreats further from the material world and abruptly breaks up with Alia.

The novel is powerful and demonstrates the psychic devastation of caste discrimination and poverty while revealing the dark side of globalization. In having Arun’s narrative addressed directly to Alia, Mishra subtly reveals the complex intersections of gender, caste, class and religion in India.

This novel leaves the reader with much to think about gender politics. Why do so many contemporary Indian male authors represent women’s experiences, yet deny them a voice in their works?