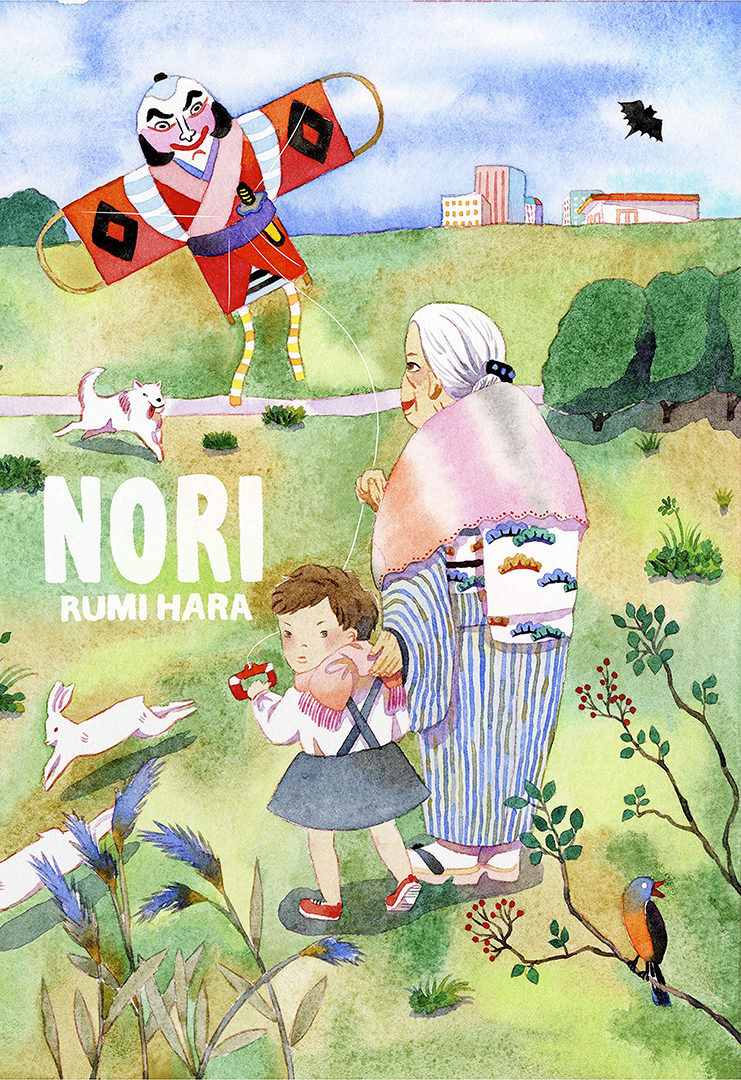 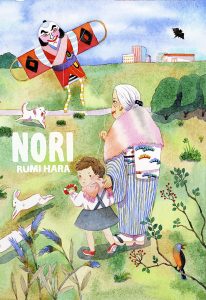 Japanese cartoonist Rumi Hara’s debut graphic novel Nori, published by Drawn & Quarterly, recounts the imaginative adventures of Noriko Iwasaki, a spirited preschooler growing up in 1980s suburban Osaka. With both her parents busy with work, Nori’s care falls to her grandmother, whose watchful supervision is evaded time and again by the feisty four-year-old. The girl’s boundless curiosity and love of exploration bring her in contact with the people, fables, and traditions of the world around her.

The book is divided into six chapters, each recounting an escapade of Nori and her devoted grandma. With myths and folklore coloring the girl’s active imagination, everyday events become magnified to adventurous proportion. One story tells of Nori’s participation in a preschool play and her encounter with an escaped rabbit that leads her to learn about the fabled rabbits of the moon. Another finds her exploring beneath a bridge, where she encounters a group of boys pitting a crawfish against a beetle to determine which creature is stronger. A chance glimpse of a golden frog in the stream nearby sets up the story’s unexpectedly poignant conclusion. These exploits weave together themes of friendship, family bonds, and reverence for the natural world while playing out against a backdrop of traditional festivals, childhood rivalries, and long summer afternoons.

The longest tale in the volume has Nori winning the grand prize in a neighborhood raffle–a trip for two to Hawaii. At first, her grandmother declines the prize, believing herself incapable of looking after a small child in a foreign country. She changes her mind when the association president describes the trip as a symbol of peace and revival to a community that was reduced to ashes during the second world war. Once in Hawaii, the chapter takes advantage of the state’s unique culture, employing the legend of the volcano goddess Pele, who Nori meets in one of many fanciful sequences dotted throughout the book.

Rendered primarily in black and white with limited color accents, Hara illustrates Nori’s world with loose, expressive line work that’s well-suited to portraying the child’s tenuous understanding of her environment. When Nori encounters a shabby, blanketed man in a park, his innocuous offer of a roasted rice cake appears ominous due to the artist’s clever use of canted angles and spindly shadows, highlighting the girl’s inner trepidation. The art’s greatest strength is its vivid expressions and fluent body language, which reveal characters’ thoughts and emotions as clearly as any dialog bubble.

Although Nori’s adventures capture the unique flavor of suburban Japan, they have a broader appeal that taps into the universal wonder of childhood. To anyone who remembers a time when a stroll outside could become a magical experience, Nori’s whimsical exploits may seem surprisingly familiar.