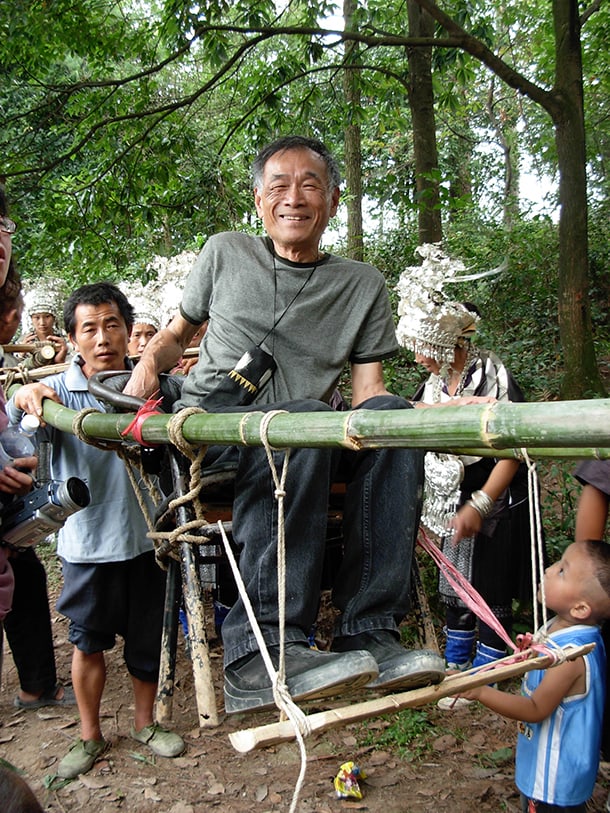 Ron Ho left his mark on the world. A maker of beautiful jewelry, his monumental necklaces are works of art and storytelling. A teacher of art, he guided the hands and trained the eyes of students from kindergarten through high school over a 35-year career. A passionate and inveterate traveler, his footprints covered the globe, most often in Asia, the source of his own heritage. He introduced countless friends and fellow art-lovers to the art, architecture, and cuisine, but most of all, to the people who keep alive the craft traditions of Asia.

Ho grew up in Hawai‘i and came to the Pacific Northwest to attend college, earning a bachelor’s degree in Art Education from Pacific Lutheran University and a master’s from the University of Washington. He spent most of his career with the Bellevue School District, retiring in 1992. He was an elementary art specialist, rotating between several schools when he met Linda Oman, a third grade teacher at Cherry Crest Elementary in 1967.

“What I remember most about Ron was how well he motivated the students to enjoy art,” Oman recalls. “On the day of the week he came to my class, the students waited in anticipation. His projects were always fun and very creative and there often was a lot of laughter.” Luly Yang, a prominent West Coast creative director and fashion designer who owns her own couture label, studied under Ho at Newport High School in Bellevue.

“I had many art teachers, but he was the most influential and memorable,” says Yang. She recalls a “very soft-spoken, gentle instructor; inspirational, motivational. He had passion, he loved what he did.”

As an artist, Ho set out to be a painter. While in graduate school, he took a course with Ramona Solberg, a well-known jewelry artist. In one stroke, he found his medium and a lifelong friend and mentor. Ho accompanied Solberg to Europe in the 1970’s, his first trip outside the United States, and her wanderlust proved infectious. A globetrotter who had traveled widely in Europe and Africa, she encouraged Ho to go to Asia, to explore his own heritage, and it became the inspiration for his art. Ho immersed himself in Asia, spending a sabbatical year there in 1978 and making annual trips to countries from Afghanistan and India through China, Japan, and Korea to southeast Asia and Bhutan. In recent years, Vietnam was a favorite destination. Ho guided groups of travelers to urban workshops and remote villages where artisans still lived and worked in the traditional manner. He combined the artifacts and knowledge that he collected with family lore from the households of his Chinese grandparents, to create beautiful necklaces, contemporary and timeless works, each a story in itself.

“Looking through old family photos from his youth in Hawai‘i, one could see how Ron may have been influenced by the Hawaiian celebratory leis,” says longtime friend and fellow artist Patti Warashina. A worker’s blue jacket, a gilded bean pod, and foot-shaped silver charms, all framed by a Chinese gate, told the story of his grandfather toiling as a farmer in Hawai‘i. Jade and shell set into the hump of a sterling silver camel recalled his travels along the historic Silk Road.

“His art, like his life, incorporated artifacts from many time periods and traditions,…bound together with his masterful metal work,” says Asian art consultant and collector Wylie Wong.

In addition to Solberg, Ho surrounded himself with a circle of friends who encouraged, criticized and influenced each other’s work. Laurie Hall was teaching at Mercer Island High school when she met Ho in 1970. Although she suspected he wanted her job, they hit it off. He introduced her to other artists and collectors.

“His largest characteristic was being social,” Hall recalls. Younger than Solberg and Ho, she found their company exciting and creatively stimulating. They formed the core of a Northwest school of narrative-driven craft that included jewelers Kiff Slemmons and Lori Talcott, and ceramicists Patti Warashina and Howard Kottler. All went on to attain national recognition.

“There was a conversation going on. There was competition, but it was a healthy competition. We helped each other … it was a school of thought,” says Hall.

Early in her career, Lori Talcott worked for Ho, Solberg and Kiff Slemmons as a studio assistant. They remained friends and influenced Talcott’s approach to her own work.

“They were all interested in ethnographic work and so was I,” Talcott says of their bond. “They observed what people were wearing, why they were wearing it. All three learned techniques and formal considerations from ethnographic jewelry, [but] more than their actual work, it was how they were in the world: balancing work and travel, being an ambassador through jewelry.”

For his work as a teacher, Ho was named Elementary Art Educator of the Year by the Washington Art Education Association (1989) and the National Art Education Association, Pacific Region (1990). For his jewelry, he was honored as Asian Artist of the Year by the Wing Luke Museum (1988); received lifetime achievement awards from Northwest Designer Craftsmen (2006) and the Seattle Metals Guild (2007); and was elected to the College of Fellows of the American Craft Council (2010). His jewelry has been exhibited internationally including solo shows at the Henry Gallery (1976), the Wing Luke Museum (1988), the Honolulu Art Academy (1995), and a career retrospective, “Dim Sum at the On-On Tea Room” at the Bellevue Arts Museum in 2006.

Friends remember Ho as warm and generous, an elegant man of impeccable taste. His long-time home, a mid-century modern house designed by architect Paul Thiry, was the understated setting for a museum-quality collection of ethnographic art amassed on his travels. There he hosted friends, students, and the occasional arts organization fund-raiser. A fan and supporter of arts of all kinds, Ho attended the opera or theater in beautiful Asian silk shirts and tribal-scale necklaces, his own work or souvenirs of his travels.

“He could hold court and enjoyed attention, [but] the way he told stories through his work was different,” Lori Talcott recalls. “He worked in a more self-reflective way. There was a modesty to his work.”

Ron Ho was diagnosed with cancer this past spring and passed away at home on September 7. A private memorial is planned. Northwest Design Craftsmen is producing a documentary film about Ho. Donations may be made to the NWDC Living Treasures Fund: www.nwdesignercraftsmen.org/donate-living-treasures/#!form/Donate.