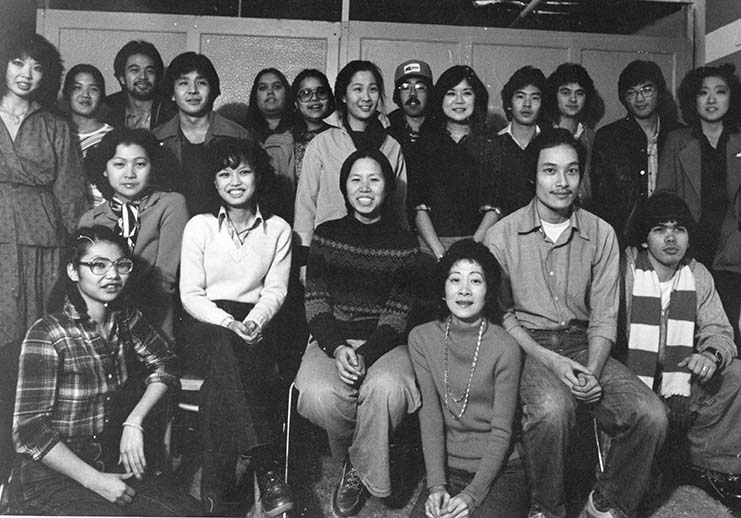 Chew had traveled to a preview of a documentary by director Haskell Wexler, who was attending the preview along with actress Jane Fonda and her husband Tom Hayden, both of whom were political anti-war activists and celebrities (Hayden of Chicago Seven fame). Chew was hoping for an interview. As it happened, there wasn’t time, but following the event he grabbed the wrong green army jacket from a rolling cart set aside for the occasion. It was Hayden’s.

“It had the musty aroma of a stranger’s sweat. Hayden had my jacket and I had his. His name was written on an inside label. The pockets had a few random receipts and a pen. I was miffed because I had left an old pair of glasses in my coat,” Chew wrote. “Hayden had already flown out of town.”

Reporter Chew was not yet a professional, as he was on assignment as a student reporter for The Daily, the campus newspaper at the University of Washington here in Seattle, and officially an undergraduate attending classes at the UW Department of Communication.

In this capacity, however, he was at the top of his game. He’d covered campus issues and nearby appearances of several other luminaries of the day including civil rights activist Caesar Chavez, author of One Flew Over The Cuckoo’s Nest Ken Kesey, as well as former 1968 Presidential candidate and U.S. Senator Eugene Joseph McCarthy. And Chew had upcoming plans to try for an editorial position at The Daily, finish his studies and launch a career in the post-Woodward & Bernstein era as a card-carrying member of the press.

Prior to the publication of My Unforgotten Seattle, Chew has authored (among others) two unique and valuable local histories, Reflections of Seattle’s Chinese Americans: The First 100 Years and Remembering Silme Domingo and Gene Viernes: The Legacy of Filipino American Labor Activism. Chew since shared numerous more stories of issues, people, organizations and communities that make up Seattle’s Chinatown-International District, with audiences all over the Northwest, across the United States and on occasion, internationally. He’s done so as a writer, in his former capacity as a newspaper editor, and as the much lauded and nationally recognized former director of the Wing Luke Museum of the Asian Pacific American Experience.

But looking back to his UW student days as an aspiring journalist, his celebratory and storied career path looked quite bleak just two years after Chew inadvertently took home Tom Hayden’s jacket, starting off a dramatic, unscripted and decades-long detour.

In 1975, UW student Chew filed a complaint with the UW Staff Human Rights Office, after learning that a possible open job in the editorial staff at The Daily had already been quietly filled, without opening the opportunity up to a larger, more competitive field.

Chew alleged in filing the pioneering complaint that it was observed that “minorities on the whole begin as reporters and end as reporters, without achieving the upward advancement to editorial positions many whites achieve.” When his complaint was upheld, the powers-that-be at the supervising UW Student Board of Publications pushed back in a well-covered struggle that was not only publicized in the pages of the UW Daily, but in both major Seattle newspapers and regional television stations.

The upshot was that Chew was vilified as a troublemaker by some publication supporters, Department of Communication boosters and faculty. When Chew applied for his BA degree at the conclusion of his studies, the department quibbled over a handful of credits, rejecting his application which included reporting experience obtained at a local community newspaper, The International Examiner. The school took the position that credits must be obtained at a publication of their choice and withheld granting the degree unless the undergraduate jumped over this additional hurdle.

“I won my case,” Chew reflects in his book. “But in speaking out negated all I had accomplished as a reporter in the eyes of prospective employers. I had backed myself into a corner. I didn’t have a degree. My outspokenness cost me strong professional references. Backed into a corner, I watched my career aspirations crumble.”

And while Chew garnered some support, he specifically calls out local writer and cultural icon Mayumi Tsutakawa, also a former International Examiner editor, for her support through this time. The vehemence, criticism and coverage which followed were wearing, and left him worn and discouraged. Chew decided to cut his losses and leave this chapter of his life behind without his once prized degree.

Ironically, today the author’s name is one of the illustrious graduates featured on the Department of  Communication Hall wall of fame.  He is one in a select group of a few who the department now uses online and elsewhere, as proof of the continuing caliber of the institution, in stark contrast to their past behavior when they threw the weight of their influence at him decades ago as a young man pursuing his degree and a career in journalism.

But it should be noted that the department did not extend an invitation to Chew to receive the long-withheld degree after his subsequent success. Friends and supporters of the author approached the school on his behalf without his knowledge. Once prompted, the department awarded Chew his degree in 2002, added his name to the Hall of Fame in 2004, and requested him to address department graduates at commencement in 2006.

While it doesn’t seem a stretch today, oddly enough, when readers look at his boyhood reminiscences, such a future did not pop automatically to mind. In early chapters, he relates the story of an awkward, shy, distracted, insular but imaginative second son in a family of four children, born to two older, scrappy, hardworking and upright immigrants from China. Nevertheless, Chew brought home several report cards with less than stellar grades, accompanied by notes from teachers who expressed worries about his lack of classroom engagement skills, sparking very real concerns that he was quite possibly slow or learning impaired.

Several decades later, as the middle-aged father of two boys, Chew became aware while researching that it was quite likely that during all those impressionable early grade school years, he had been wrestling with undiagnosed ADHD (Attention Deficit Hyperactivity Disorder), and much of his hidden promise had understandably been obscured.

Nevertheless, it may come as a surprise, that aside from a little “newspaper” he put together as a child, as a fun project to entertain his little brother, Chew did not consider a career as a writer or journalist until he was much, much older.  Chew had a bright moment with a teacher recognizing his writing in junior high and a handful of moments between then and his sophomore year of college when he finally determined his destiny lay in the profession after taking a course from the then legendary and revered professor William “B.J.” Johnson.

Today, Chew’s byline has appeared for over 45 years in local, state, regional and national publications, and on the other side of the press as a newsmaker, as the former highly visible and public face of the Wing Luke Museum, and current executive director of the International Community Health Services Foundation. He served as Community Scholar-in-Residence and Visiting Lecturer for the Interdisciplinary Graduate Program in Museology at the University of Washington and as a consultant for the Gates Foundation’s visitor center development project. And he’s served for years as the board president of the International Examiner.

His 17-year album of work with colleagues at the Wing Luke Museum is nationally recognized, and it has garnered the museum an “affiliated area” designation from the Smithsonian Institution in Washington, D.C. His multi-career includes holding organizational positions where, unlike others, he did not always possess the usual pertinent and requisite door opening college degree, yet his legacy is marked by awards and recognition, including a $115,000 grant from the Ford Foundation’s “Leadership for a Changing World” Award in 2004, finishing in a much-coveted select 18 out of 1,000 nominees, with candidates whose work spanned the width of important social, economic and environmental issues across the country.

Remarkably, Chew has basically accomplished all of this while living, working, networking and attending school in two adjacent Seattle neighborhoods (North Beacon Hill and the Chinatown-International District) and hardly taking a long-term step for over 65 years outside the boundaries of a slightly larger 24-square mile section of his hometown.

One of the truly unsung hallmarks of Chew’s lifelong work is now many people, perhaps in the hundreds, that he has recognized and helped along the way. It’s highly unusual, especially looking back at the social climbing and clawing up the ladder that many of his peers in both his generation and in general society actively engaged in 20 and 30 years ago. Chew’s book is filled with individual faces, attributions and special moments. It also features a extensive 22-page index so that readers can follow the mini-storylines of many others.

His poignant memoir now adds to the small but valuable stack of growing resources that reference this important and regionally significant multi-ethnic neighborhood of Chinatown-ID, now pressured by more recent growth and then changing demands such as gentrification and the heretofore unknown social and economic challenges of a post-COVID chapter. Like so many communities of color in the United States, the histories of such communities have historically been neglected, overlooked, dismissed, devalued and disregarded by mainstream history and cultural organizations due to systemic racism, rampant stereotyping and an overall lack of respect for neighborhoods and communities of non-white origin.  In this respect, the district’s own energy, grit and determination — like that of Chew — has made the important difference.

Chew’s inspiration for the memoir itself developed after a morning run in his neighborhood. He used this same morning run to assist him throughout its writing and amped up the mileage he covered as what developed as a three-year project came to a close, until he was running essentially a half-marathon. After he turned in the book, he went on to actually compete in one. The book evolved, as a series of news stories, “a collection of puzzle pieces which would be assembled” as the author came to know and understand the pathways his life had taken from earliest days up until this moment.

He looks at his story to this day as a still, ongoing and expanding project. The last chapter of the book finds Chew musing at what COVID-19 and recent news events may impact the future of the Chinatown-International District on a hopeful note. Seattle insiders, fellow residents of the Pacific Northwest, old, new, past or present, will enjoy taking a more nuanced and personal tour of the area with a working storyteller whose singular gifts as a tour guide are par excellence.