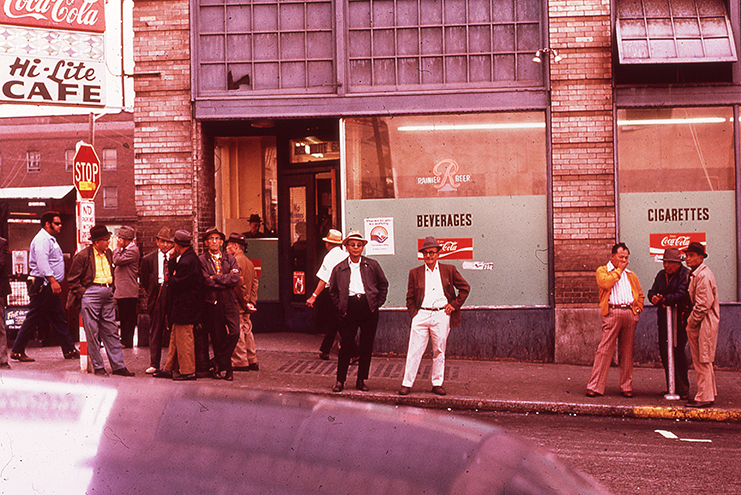 This fall, the International Examiner will publish Ron Chew’s memoir, My Unforgotten Seattle. Journalist, activist, historian, writer and longtime IE editor and board president, Chew chronicles six decades in a vastly changing Seattle from his youth to current days. In doing so, he preserves the people, stories and memories of Seattle past and present — and in particular, Chinatown-International Distict and regional Asian and Pacific Islander leaders and activism. The following is Chapter 11 from Ron Chew’s memoir, the chapter entitled, “Chinatown”. The IE will publish more excerpts from My Unforgotten Seattle in future issues.

Even though I lived on Beacon Hill, Chinatown felt like a second home. It was just a five-minute drive or a 10-minute bus ride away. It wasn’t simply the place my parents worked. It was where we went to buy groceries, eat out, watch movies and theater performances, catch up with relatives and friends and go to church. It provided an emotional touchstone. I could relax and joke freely there, without regard to how the larger community might judge me.

My parents called Chinatown Hong Ngin Fow or Hong Ngin Gai. Hong Ngin is what Chinese people called themselves; it means “people of the Tang Dynasty,” a nod to China’s golden past. Fow means port; gai is street.

Chinatown was loud. It was alive. Shoppers scrambled in and out of stores, dumping armfuls of purchases into the back of cars left idling. People chatted gleefully, yelling at one another even though they stood only inches apart. Thin bachelor men smoked in doorways, hacking vigorously and spewing wads of phlegm on the sidewalk. Along both sides of the alleys, rusted black metal fire escapes zigzagged downward, the railings draped with wet clothes and kids peering from above. The streets smelled like a mixture of pungent fried Chinese food, gasoline and rotting garbage.

Some shop owners still used abacuses instead of cash registers. I watched their deft fingers slide quickly and lightly across the clacking beads. My mother wrangled over prices, trying to squeeze out the best deal. Transactions were handled in cash. My father and mother didn’t have checkbooks or credit cards. Receipts were written with fountain pens dipped in inkwells.

I accompanied my mother into the Quong Wah poultry shop. It was owned by Chong Loo and Howard Low. Chickens squawked, and I cringed as I watched the shopkeeper grab an unlucky bird from a cage, chop off its head, drain the blood and pluck the feathers. The chicken was wrapped in butcher paper, old newspapers and string dispensed from an overhead spool. Chong Loo’s daughter Maxine rang up purchases. Sometimes a chicken scrambled out the front door before its execution, and Maxine and her youngest brother Jerry chased down the bird before it was snatched up for dinner by waiters at Tai Tung Restaurant next door.

There were no parking meters. Sometimes we were trapped inside a row of double-parked cars, waiting to pull out. We knew who was hemming us in because we recognized their vehicles. We bought more goods and visited a few more shops until we could leave.

We dined out as a family only several times a year, usually when hosting out-of-town guests. Eating out was a luxury. The tiny Chinese American community didn’t yet have a moneyed professional class.

Our favorite restaurants were Linyen, Eight Immortals and Little Three Grand. My mother bypassed the printed menu, marching straight back into the kitchen to request specific dishes from the cook. She explained how each should be prepared and negotiated the price. We ate minced pork steamed with salted shrimp paste or Chinese sausage. We ordered heaping mounds of white rice to dilute the salty taste. The sharp smell of these dishes drew frowns from non-Chinese customers. This was very different from the aroma of almond chicken or sweet-and-sour pork at the Hong Kong Restaurant.

Little Three Grand had a front counter with a row of stools where Chinatown bachelors ate pastries and drank coffee. My friend Dean Wong’s dad—Yit Tow “Milton” Wong—worked there. I knew Dean from Chinatown; we became buddies at the University of Washington. Dean’s mother Puey King ran a small storefront hand laundry called “Re-New Cleaners” at 505 Maynard Avenue South, next door to the Hong Kong Restaurant. We brought our bed sheets there to have them washed and pressed.

Our family came down to Chinatown during Chinese New Year. Vibrant lion dances—punctuated with a cacophony of firecrackers, drums, gongs and cymbals—attracted small impromptu gatherings in front of the stores. We visited family friends and relatives living in upstairs apartments or working at shops and restaurants. As kids, we got crisp new dollar bills, coins or lucky candy stuffed inside red envelopes. My parents exchanged bags of fruit and tins of cookies with others.

My parents occasionally took us to see Cantonese opera. It was performed in the second story hall of the Chong Wa Benevolent Association, a brick building with a red tile roof and balcony at 522 Seventh Avenue South. The stage had big red curtains and oak wainscoting. A large, framed image of Dr. Sun Yat-sen and the flags of the United States and the Republic of China hung in the background. My father’s restaurant coworkers acted out ancient classic tales in elaborate costumes under heavy make-up. I didn’t understand much of what was going on, but I was tickled to see people I knew up on stage. There were very long intermissions between acts. We never knew if—or when—the show had ended.

I much preferred going with my mother to see Chinese films at the Kokusai Theater, a 490-seat movie house at 412 Maynard Avenue South. The cushioned theater seats were more comfortable than the hard folding chairs at Chong Wa. I didn’t have to endure long, random intermissions. The films were in Cantonese, so I could follow the plot and a little bit of the dialogue. Occasionally, films offered poorly translated English subtitles.

The Kokusai was owned by Mr. Tadao Kitamura and his wife Mitsuye. Their four kids, Lance, Elaine, Darrell and Zen all worked there. Lance had been my classmate in elementary and junior high school. He had a happy grin, big teeth and a thick shock of unruly black hair.

The movie house opened in 1918 and was previously known as the Atlas Theater. In the 1960s, the Kitamuras renamed it the Kokusai or “International” theater. The Kokusai alternated between twin features of Chinese, Japanese and Filipino movies. Monday and Tuesday were Chinese nights, Wednesday was Filipino night, and Friday, Saturday and Sunday were reserved for Japanese offerings.

After passing through the glass-paned front doors, we stopped at the ticket once in the lobby to pay for admission before proceeding through one of four doors into the seating area. We watched two black-and-white films from Hong Kong for $1.25 per person.

The films began right after the big red velvet curtains parted to reveal the screen. I marveled at the martial arts and supernatural ghosts flying through the air. I didn’t care for the violent sword-play and the brutality of severed limbs and heads. There were moments when I had to close my eyes and turn away. My mother hated the violence as well. She came for the romantic stories of separation and heartbreak, the epic tales of filial devotion, and the heroic stories of uprisings against tyrannical rulers. She arrived with a full box of napkins in her purse, readying herself for cathartic crying sessions.

We snacked on Chinese watermelon seeds (ga ghee) and homemade fried chicken wings which my mother packed in several brown paper lunch bags. I heard the steady click and clack of watermelon seeds being bitten in half by the dozens of Chinese women in the audience. The noise was distracting when the movie entered quiet tender moments. The small chestnut-colored shells of the watermelon seeds and leftover chicken wing bones were scattered all over the floor. I had to be careful where I stepped if I didn’t want the bottom of my shoes coated with a disgusting combination of spilled soda pop, gum, popcorn and food waste. I felt sorry for the people who had to clean up.

On Mondays, it was especially difficult to sit still. After a weekend of bussing dishes at the Hong Kong Restaurant, my legs and feet felt tingly and sore. I had muscle cramps. I escaped to the dimly lit front lobby just to get out of my seat. There were vending machines for candy, soda pop and popcorn. But I had no money. I roamed around until a theater patron made a purchase at the popcorn machine. Then I looked to see if any popcorn was left at the bottom of the dispensing slot. I reclaimed every last piece, including unpopped kernels.

Every week, my parents stopped in Chinatown to pick up the latest preview flier for the Chinese movies. The fliers were in a mail slot near the Seattle Kung Fu Club storefront at 658 South King Street.

In 1985, businessman Danny Woo and a partner purchased the Kokusai. They wanted to remake the building into a multi-use six-story development with apartments, office and commercial space, and a Chinese movie house. But Woo passed away in 1987. The property was sold to Assunta Ng, publisher of the Seattle Chinese Post and Northwest Asian Weekly. The beloved Kokusai, severely damaged in a 1997 snowstorm, was torn down to make way for a new structure that has served as headquarters for Assunta’s publications since 2001.

In the 1960s, the Kitamura family also ran the Raku Raku Restaurant at 416 Maynard Avenue South, next door to the Kokusai. It was one of the first Seattle establishments to serve sushi. In 1975, the space was remodeled into the home of the newly created International District Community Health Clinic, later renamed International Community Health Services (ICHS). I never ate at the Raku Raku. It wasn’t until college that I deviated far enough outside my limited culinary upbringing to sample sushi for the first time.

Ron Chew will speak about his book at a number of upcoming online events including The Museum of History and Industry on September 16; Seattle Town Hall on October 1; and the Wing Luke Museum on November 21. Check their websites for more details.