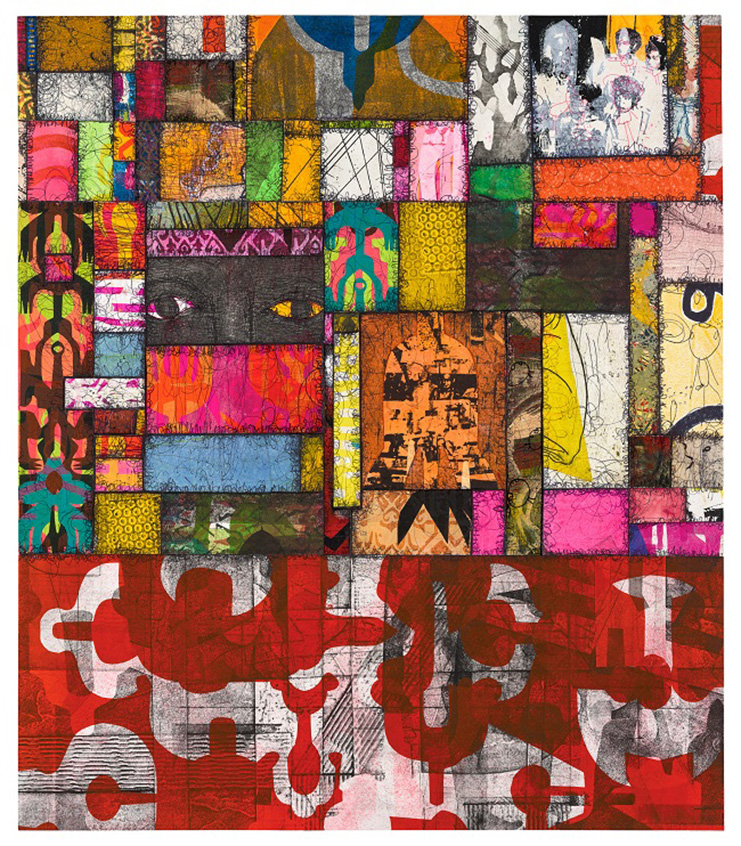 I have known Romson Regarde Bustillo for many years as an artist since the early 1990s. For all these years up to now, he has never stopped pursuing his art and has continued showing at many places in the Seattle area. He has always been in and out of Seattle, either going to or coming back from diverse areas around the globe. So, I could not be help but think of him as a global citizen rather than just a Seattleite. Besides, Romson has steadfastly kept his roots intact and identifies himself as a man from the port city of Cagayan de Oro City on the Island Mindanao, the Philippines where he was born and spent his youth. Spanish contact in this region began in the early 17th century, and the residents are mostly Roman-Catholic, but this urban city has an increased multi-ethnic population with diverse religions and cultures.

There are special favorite places Romson keeps visiting. He often goes to Barcelona, Spain. Barcelona is a large port, facing the Balearic Sea, and is the capital of Catalonia. The city has deep historical and cultural roots from Roman times, Medieval times, and even now the Segrada Familia Church by Antoni Gaudi has been under continual construction since 1882.

More often he has visited Oaxaca in Mexico. In order to raise funds for travel, he has had numerous art sale shows to prepare for his departures. Oaxaca is known for its Spanish colonial style architecture built with local stones, and a rich hand-woven textile tradition by the native population.

In Oaxaca he took classes taught by Japanese-Mexican painter and printmaker, Shinzaburo Takeda. Mr. Takeda has taught art for generations to many native students at universities for almost 50 years. In 2017, Romson conducted a study abroad to learn the technique of layered prints, a local tradition in Oaxaca and other places according to a pamphlet published by the Pratt Fine Arts Center, where he teaches.

What stands out about Romson is that the relentless search for his own distinct art is independent from current art trends or schools. This stubborn pursuit for his art has gradually brought to his work a unique maturity.

Some of the early notable shows are “Romson Regarde Bustillo: Mindanao” at King County Art Gallery and “Taga Saan/From Where: Romson Regarde Bustillo” at Pratt Fine Arts Center both in 1999. In a brochure for a former show, he calls Mindanao “my spirit world, the place I go when I dream.” He explained that his mother was a clothing designer in Mindanao, and specific patterns appear in indigenous and Muslim textiles. No wonder, his work is aesthetically connected to the native textile tradition, unlike Indonesian batik because each color here is distinct and brighter in native textiles as well as in Romson’s work. Some images in Romson’s collage prints, resemble the woven designs found in the tribal Inabal textile, made out of manila hemp in Mindanao.

The exhibition, “More Than Can Be Held”, at Hedreen Gallery shows more of Romson, who is playful in his own creative manner. The semi-geometric cut-out black shapes pasted on the glass windows and throughout the gallery, are scattered like traces of a bird flying everywhere as if to mirror his wondering spirit. Yet, he isn’t a quaint traveller. A stage set for opening night performances brings a certain romanticism, which originated in the colonial influences of Spain. Then, he names the set, the wall and bed platform, “PUNYETA be gone”, and Punyeta could mean four-letter word obscenities or affectionate greetings in the Philippines.

Some prints in the show are more complex than his earlier work, and other prints are strikingly different from his previous works. Romson’s long pursuit in print making forms an artistic language that speaks more clearly to the viewer in this exhibit rather than mystifying. For “What maria knows to be true (2018), ” he dedicated a song (in the Philippine language, either Tagalog or Cebuano) to bring a virgin Mary into his world.

There are three works (2018) that hang right next to each other; “Miquel trying to fix things”, “Carlos resting with his thoughts” and “The Sweet Potato Prince looking for a job in America.” These three works are collages of small print pieces, individually printed, possibly using different printing methods. These urban themes are intriguing. Previously, the colors, forms, and line drawings originated from his ethnic identity and his inner world, but they become a muscular artistic language to make these individual men come alive in abstraction. Here, one can hear them speaking, rapping with their movements.

In the show, 22 large collagraph prints dominate. They are hung together in two differently sized layers and take over the white wall. All of them are black/white monochrome line drawings, which are like architectural urban city scapes, with delicate variations of tonality. He has opened up and gained a certain freedom in creating the images in this media. It seems that even if he has thrown every thing at the surface of the paper, each element instinctively knows exactly where to land in order to hold a balance in the chaos. Some areas are dense, and dark, and some areas are pure white and glowing with light. Shooting straight lines are strong, and are in high contrast with the delicacy of a smaller textural design of organic formations. There is transparency among these layers of designs, and one can trace every process of his drawings.

This is Romson, who sometimes keeps his own personal emotions in check, but his art has become exuberant in it’s own execution. I do not know how and where he is going with his art from here on in but it is worth catching this exciting stage of his development. The show will end soon. Come and see it if you can.