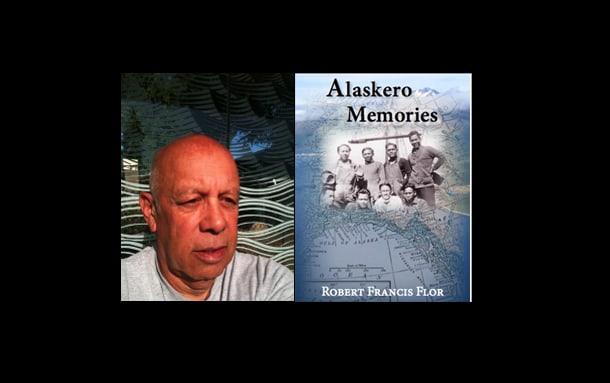 The histories of the Filipino diaspora spread far and wide. Many live across the globe, experiencing lives unique with ties to their identities. In the United States, Filipino Americans have had a long, detailed story that encompasses many years.

Alaskero Memories, a collection of poems by Seattle writer Bob Flor, speaks to one enlightening facet of that ongoing story. A chronicle of his times working at a salmon cannery during the ’60s, Mr. Flor recounts with poignant poeticism of when he and other Filipino men worked these laborious jobs. Themes of identity, opportunity, community, and growth can be found in these poems.

I talked with Mr. Flor about his experiences regarding his fateful summers at the cannery and his writing process for these poems. We at the International Examiner thank him for taking the time to chat with us.

Joshua Talosig: Your writing style is almost novel-like in that much of these poems consist of short sentences. How do you think your unique prose contributed to the poems’ strength?

Flor: When I initially began writing poetry, I was drawn to free verse. During the late ’60s, I worked on a teachers manual for Seattle Schools where I became familiar with writers including Carlos Bulosan, Vic Pineda, Serafin Syquia and Victorio Velasco. They influenced the temperament of my work. In studying Filipino American poets years later, I came across Names Above Houses by Oliver de la Paz, who taught poetry at Bellingham. I was fortunate to get to know him and enrolled in his workshop at Jack Straw where he taught prose poetry. I was also taking playwriting courses about the same time, learning to construct dialogue. In some ways, these experiences may have blended to influence the style.

Talosig: One of the more sobering poems was when your girlfriend, Linda, broke up with you while you were away to marry someone else. Was it lonely to be disconnected from your life in the Philippines that summer?

Flor: I’ve never lived in the Philippines. Filipino single men (Manongs) who arrived in Seattle during the ’20s and ’30s concentrated in the International District. If they married, they moved “uptown” …meaning they typically acquired homes in the Central District. I was born in Seattle and raised in the Central District, which was multiethnic. It was primarily home to the initial immigrant Filipino family but also to Black, Japanese, Chinese, Jewish, and white American populations. We lived side-by-side, attending the same schools and hanging out together. A recent article in The Seattle Times described the real estate practices that limited the ability of ethnic minorities to own homes in some areas of the City. This began slowly changing during the ’60s and s’70s.

I met Linda while attending Seattle University. Her family lived in Lake Forest Park which was like a foreign land to me. We were engaged and to be truthful, I was too immature. I’m terribly pragmatic and considered fearfully I hadn’t graduated and we didn’t have money. She returned my ring. I considered joining the Marines but my manager at Smith Corona said I was too emotional. He recommended going to Alaska as planned and writing her as she might reconsider. Her letter followed one I wrote. It was disappointing and heartbreaking. After the canning season, I enlisted in the Navy with the agreement they give me a year to graduate. About two weeks after I completed college at Seattle University, I was on my way to San Francisco and then Pearl Harbor.

Talosig: I particularly enjoyed the imagery, allusions, and metaphors you made with the fish you worked with. In one poem, you describe you and the workers as like bagoong, the fermented sauce made from the fish. Its smell “distinct and unique / … like us.” What was your creative process like, recollecting all these images from long ago?

Flor: I wrote a few of the poems in the late 2000s just to recount a few of my experiences on the Filipino crew. I didn’t have a book in mind at the time. Sang Chi and Emily Moberg Robinson at UC Santa Cruz were seeking works for an anthology titled Voices of the Asian American and Pacific Island Experience. I submitted my few poems which they included in their 2012 publication.

I really hadn’t thought much about the works until Poets West called two years later and asked if I’d read on a program at Hing Hay Park with Shin Yu Pai. She’s a very talented local poet and the author of the collection Aux Arcs. She read her poem, “The Iron Chink,” recounting the salmon butchering machine invented to replace Chinese cannery workers. She later invited me to read my poems at On-the-Boards where she was curating a program about documentary poetry. Following this, Catalina, my wife, said, “You need a book.” That became the inspiration.

I wrote the poetry to honor the Manongs who helped me complete college. They’d teach me the different cannery jobs and send me to cover their work. They knew I needed money for college and it was their “Alaskero scholarship.” We often take for granted the everyday things around us. … how food gets on our tables, how and who processes it and what their lives are like. My poetry was a way to immerse readers in cannery life and provide an experience with the lives of men and women whose labor feeds our nation.

The book’s trajectory follows the cannery work process. It also is a photograph of everyday life in a small fishing town where there were distinct living and working arrangements by ethnicity. The summers spent in King Cove left an unforgettable impression on me and I wanted to respect that memory of people.

Talosig: Were you into poetry already during your summers in Alaska? How did you get into the craft?

Flor: During that time, I was primarily interested in American literature and following a thread with roots in Cooper, Melville, Twain through Fitzgerald and others. I completed a first reading of Moby Dick one summer. But, I also had a fondness for poetry instilled in me by my father, Vincent Flor, who immigrated from Iloilo, P.I. in 1932. He would occasionally read Whitman, Poe, and others at family dinners. I also have to acknowledge the nuns at Immaculate Conception and the brothers at O’Dea for strengthening my introduction to poetry and literature. Additionally, we lived within walking distance of the Yesler Library, where I received an introduction to many books by some wonderful librarians. These were my important foundations.

I came late to writing poetry. In the late ’90s, a co-worker at Metro and fine poet, David Stallings, would bring work in and ask me to edit it. I wondered if I could write this “stuff” as I put it. I began with a few courses in Experimental College taught by Janee Baugher. I wrote a few poems for submission and they were eventually published. My first poems appeared on online sites such as Tamylfer Mountain Poetry Review and the Seattle P.I.

Talosig: Are you still in contact with some of the men you worked with?

Flor: We “the young boys” were mostly in our early 20s while most of the Filipino crews were composed of early immigrants from the ’20s and ’30s. They came with dreams of education and success but were mostly destined to labor as waiters and busboys, janitors, or agricultural workers. This early Manong generation is dying out and many have passed away.

I still run into a few who were my age at the time. Several still live in the Seattle area like Terry Acena, David Madayag, George Ramos, Ernesto Damien, and Larry Flores. I’ve also spoken with others who worked other canneries like Pio de Cano and John Ragudos.

Talosig: It’s very important for stories like these to be spread, because Filipino American history often goes unacknowledged. Why do you think that is?

Flor: The Philippines hasn’t ever been an important, powerful country and that, in part, plays a role. The United States claimed it as a colony following the Spanish American War for $20 million dollars. Theodore Roosevelt viewed the islands as a strategic Naval base and a means to project American power into the Pacific. Even today, the country lies not far from the Malacca Straits, the major commercial route between the Indian Ocean through the South China Sea to the Pacific Ocean. Other than that, I’m confident the United States at that time and now have little, if any, awareness, thought, or concern about the Filipino people. From a geopolitical sense, Filipinos are low on the totem pole of acknowledgement.

Until recently, Filipino-Americans haven’t told their stories. We rarely appear on stage or screen. It’s also rare for a Filipino play, story, book, or poem to be read or performed in a theatre. It may be a result of economics where the focus was on careers the promised greater financial stability. It’s not unusual, for example, to find Filipinos in government, engineering, education, and the health sectors. Given the large and growing population, I see a growing number of Pinoys pursuing the arts unlike prior years. I’m encouraged by the efforts of the Filipino American National Historical Society and local arts organizations such as Artist Trust, the Office of Arts and Culture, and 4Culture to support the development of ethnic minority artists including Filipinos.

Talosig: What do you hope this book will mean to the many Filipino Americans who haven’t lived the experience you have?

Flor: I hope Filipino Americans take pride in the contributions of these early pioneers.

I want younger generations to take note of the men and women of that time. They weren’t huge stars or notable people. Rather, they went to work each day doing the hard work that made it possible for Americans throughout the country to focus on their own lives. These pioneers formed the building blocks of pride in culture, community and in being Pinoy.

I’m very excited about the younger generation of Filipinos who are writers, poets and artists. In the Pacific Northwest, we’ve been blessed with talented writers such as Michelle Penaloza, Rick Barot, Oliver de la Paz, Geronimo Tagatac, Rebecca Mabanglo-Mayor, Emily Lawsin, Donna Miscolta, Peter Bacho and artists like Mimi Nolledo and Romson Bustillo. There are others on their way like Third Andresen, Jen Soriano, Juanita Tamayo Lott, Lisa Silazy, Anis Gisele, Katrina Pestano, Chelsea Staples, Roldy Ablao, and others. I expect them to set high marks for themselves and to continue to present their stories and works about Filipinos in America.

Robert Flor and Patty Enrado read together at Third Place Books in Seward Park on Thursday, October 20 at 7:00 p.m. Flor reads from his poetry book ‘Alaskero Memories’ based on his work in the Alaskan canneries and Enrado will read from her novel ‘A Village in the Fields’ about Filipino American labor organizers in Delano. In addition a film entitled ‘Delano Manongs: Forgotten Heroes of the United Farm Workers Movement’ will be screened. 5041 Wilson Ave. S. (206) 474-2200. This events repeats on October 21 at 7:00 p.m. at El Centro de la Raza at the Centralia Community Center and on October 22 at 4:00 p.m. at the Filipino Community Hall of Yakima Valley. This is all part of a series of events celebrating Filipino American History Month throughout the state. Go to http://fanhs-national.org/filam/about/ for complete details.