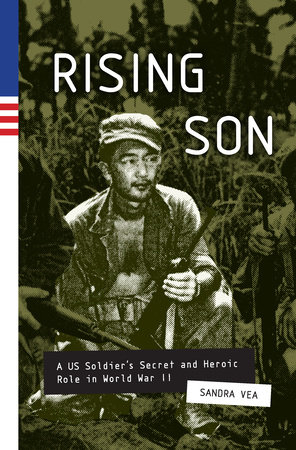 There is a treasure trove of untold stories of Japanese American soldiers who served in WWII, yet few of those can match the unique dramatic storytelling in Rising Son, the story of Masao Abe. How many had firsthand experience of future training for the Imperial Japanese Army, but also had training and service in the U.S. Army prior to Pearl Harbor, and then were among the handful of the first trained for frontline combat duty as an interpreter? As life would have it, Masao Abe’s travels would reach as far as the expanse of the Pacific War during WWII.

There can be no drama without crafted writing, no matter how interesting the facts may be. Thankfully, Rising Son is not a plodding family history awkwardly told, but a beautifully executed tale that resembles something more like a novel than a documentary.

Although purists may complain about the fiction-inflected style, readers will be instantly convinced by the unfolding narrative that first hooks; then soon moves with sleek speed.

Rising Son narrates two intertwining, but unifying, story lines. One recounts the author’s gentle coaxing of the reluctant elderly Abe to share his decade-old memories, and the other is the revitalized realization of those memories.

The result is that Mas’s raspy old voice, burdened by age and the pain that accompanies it, is again young and impulsive. Rising from the page comes the miracle of youth reborn. These story segments are no cliched flashbacks, but something much more nuanced that transforms Masao’s hard-to-believe story into uncontested reality.

The interludes of the author’s conversations that uncover Masao’s WWII memories have more value than one might first imagine. Veterans of any war are often reluctant to release the demons of their wartime experiences, and among Japanese American veterans, they may be even more so. These current day narrations provide framework and more; they highlight issues such as the liability of opening past memories, the challenges of old age, and the value of youthful memories. Seattle residents will also appreciate the local connections in a couple of these episodes.

Locally based author Sandra Vea is perfect in telling Mas’ story. Being the partner of one of Masao’s sons, she is enough of a stranger to be able to ask questions family members could not, and enough of being family to be trusted with the deepest of secrets. Additionally, being not Japanese American, she instinctively knew what background information and historical facts needed to be included so that any reader could be at ease reading Rising Son.

There are costs in living, the costs rise substantially in the time of war. This could not be clearer for Masao Abe, choosing to serve valiantly for the country of his birth, while family members were confined by that same country. Although his mission as an American soldier fighting Japan was perfectly clear, his strong cultural ties with Japan weighed upon him nevertheless.

His father returned Masao to America just prior the start of the war and in the nick of time, thus pulling him over the fine line of fate on the American side of the Pacific. The thinness of that line was something that was never lost upon him.

On the very front lines of battle in the Pacific, he was constantly suspected of being the enemy by his fellow American soldiers. While they could easily dehumanize and kill the faceless Japanese soldiers, Masao could not help but see their humanity; their faces were as familiar as his schoolmates’ during his growing up years in Japan. However, that humanity would allow him to be effective in his interrogation of captured Japanese, which eventually gained him both recognition and success.

Reading Rising Son, one realizes that veterans pay the price of memories of wartime brutality, injustice and violence where death could be tragic, senseless and only occasionally heroic. Even a half century plus of peacetime living and old age cannot totally erase or even ease those nightmares.

But just as the costs of war are high, the value one puts on friends and family also rises in such times. In the post war narratives, former and fellow Japanese Americans share old soldier stories, which thankfully lighten the weight of the darkness of the past.

Rising Son is many things. It is as much an adventure story and family history as it is a horror story of the most violent kind, just as true war stories are. Although the war looms large in places, it is also a dramatic stage for personal growth, humanity and history. In the end, Rising Son is a story of an ordinary man whose courage in an extraordinary time allowed him to survive while tossed by life’s and the war’s largest waves.