At a recent event for the APRIL Literary Festival, 25-year-old poet Zubair Ahmed read from his literary debut to a packed house at the Blindfold Gallery on Capitol Hill. Conceived as a collection of poems about locating home, City of Rivers maps the psychogeography of Ahmed’s native Bangladesh, a country that the poet left while in his teens.

Ahmed guides his readers through alleys in Rayarbazaar, the fields of Aga Khan, and a tiny urban dwelling big enough to sleep eight people. The poet remembers the Dhaka suburb of Ashulia, before urban development: “A long stretch of dirt road / Cutting through a wide river / Which passed us on both sides / Like someone lost within us.”

In poems that span sky burials, power outages, and organ harvesting, Dhaka comes alive to form a strange legacy. In poems like “Measuring the Strength of a Sparrow’s Thigh,” a speaker unfolds an outdated map of East Bengal and East Pakistan while wearing a sibling’s hand-me-down shirt, which doesn’t fit.

In 2004, Ahmed’s family won the Diversity Visa lottery and made the decision to immigrate to the United States. “For my parents, the win represented an opportunity to find a brighter future for their two children,” Ahmed said. “They could just see it—us becoming well educated men with stable jobs. A future not easy to build in Bangladesh.”

But the lottery win confused Ahmed, who felt estranged from his peers and spent his days at Dhaka’s first gaming café. 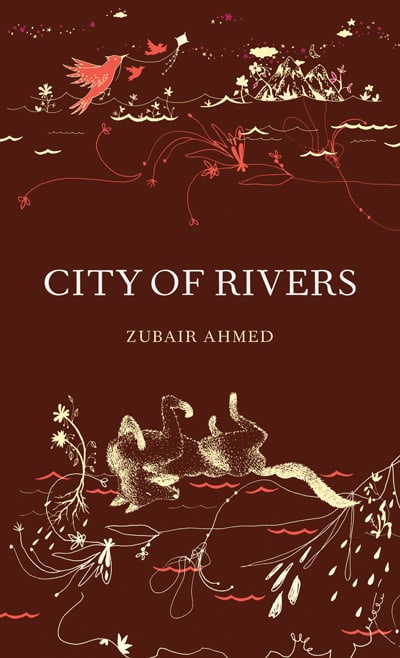 “I was happy and 15 years old,” Ahmed said. “I made enough money from winning tournaments to buy pizza and soda. I laughed and lived. I didn’t know if this could continue, and I didn’t want to deal with an uncertain future. In the end, I left with a ready heart.”

Ahmed’s family re-established themselves in Duncanville, a suburb of Dallas, Texas, where his paternal uncle lived. Relatives helped the new immigrants learn the basics of American life, “like how tap water is drinkable and how credit scores matter,” Ahmed said. His parents secured jobs assembling cabinets at a furniture factory, where they toiled for almost a decade. “Duncanville offered little more than a Walmart and was strikingly different from Dhaka. We didn’t have a community—most south Asians lived in Irving, Plano or Dallas. We struggled to adjust.”

This tension is reflected in City of Rivers in works like “Minyard’s,” a short poem about grocery shopping in small-town Texas and encountering cops in a parking lot who make racist jokes. In a dry and barren landscape so markedly different from the damp and clamor of Dhaka, poems like “Driving at Night in Texas” highlight the isolation of cruising alone, past landmarks like Joe Pool Lake—a body of water that doesn’t know it’s man-made, its connection to a place or people.

In 2007, Ahmed left Texas to attend Stanford University. Though focused from a young age on pursuing a career as an economist or engineer, his intellectual curiosity bloomed in college. Ahmed realized his deep interest in the arts and humanities and fell in love with an interdisciplinary approach to learning, “one that blurred, even removed, the traditional boundaries of subjects.”

At Stanford, Ahmed enrolled in creative writing courses taught by poet Michael McGriff. Burned out from over a decade of intense academic study and exhausted from engineering finals and projects, Ahmed found refuge in poetry. He began reading the work of writers like James Wright, Philip Levine, Larry Levis, Don Domanski, and Peter Everwine—authors who “write with a magic I don’t understand, a unique touch that defines their stitching of words … which is filled with longing, story, and surrender.”

Recalling his former student, McGriff commented: “His works reminds me, in its own way, of the poetry of James Wright. There’s a deep emotional center to his work that is tempered by concise imagery, leaps of imagination, and strikingly original image-making.”

The poems that became his debut collection, City of Rivers, were written primarily during Ahmed’s junior and senior years at Stanford. Between 2010 and 2011, Ahmed shared nearly 200 poems with his mentor. McGriff compiled the poems into a manuscript and submitted it to McSweeney’s, which published it in 2012 as one of the inaugural titles in its new poetry series.

“It’s simply a marvelous and mature collection of poetry,” McGriff said. “And, as far as first books of poetry go, I can’t think of any other collections that hold a candle to City of Rivers. It’s a wonderful achievement.”

Since September 2013, Ahmed has called Seattle home. Opting to pursue professional opportunities outside of Silicon Valley, Ahmed now works as an engineer for Boeing.

“I felt friction at Silicon Valley, where ideas seem more important than people,” Ahmed said. “I wanted to maintain a solid work-life balance—something which is difficult to attain in the booming companies of the Valley.”

A newcomer to the city’s literary scene, Ahmed shared the Hugo House stage earlier this spring during the Associated Writing Programs conference, with poets that included Victoria Chang, Dan Chelotti, and Carl Adamshick. With a promising future in publishing ahead of him, Ahmed remains committed first to his love for writing.

“I wish for poetry to be my companion—I want to be by poetry’s side. Ready to disappear into its world, where creation and discovery play with imagination and emotion.”