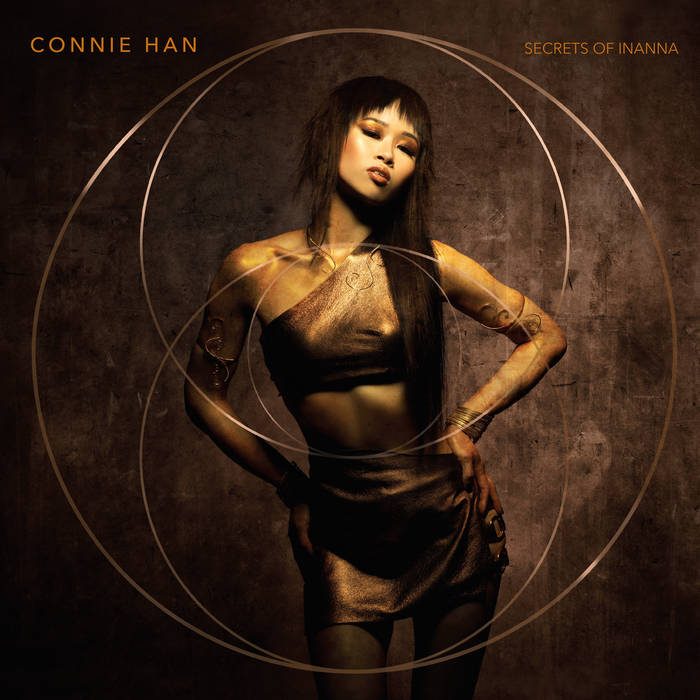 When one considers the vast landscape of modern jazz in all of its varied idioms, the area nestled between the Tigris and Euphrates rivers is generally not the landscape one envisions. Ancient Mesopotamia, once located between these two rivers, is often considered one of the birthplaces of modern agricultural society. It is a land steeped in history and myth, and it is from one of these myths that rising jazz pianist Connie Han draws inspiration from on her latest album, Secrets of Inanna.

The album is a jazz interpretation of the ancient Mesopotamian epic The Descent of Inanna, translating the rich oral history of the poem into a beguiling mix of hard bop and forward thinking modern jazz. Inanna is the Sumerian goddess of love and war, sensuality and power, a figure of strength, courage, and grace, and listening to the album it’s not hard to understand why Han feels an affinity to the goddess.

Much of Han’s playing on the album is tough and muscular, full of quick, angular phrasing that skips across the keys with virtuosic flourish. It is self assured, confident, and emotionally expansive. Moving back and forth between electric and conventional pianos, sometimes in the same song, Han’s playing sounds deeply rooted in the classic hard bop tradition, but still manages to sound modern. To call her a traditionalist would be a disservice. Her musical language is uniquely her own, as strong and sensual, defiant and willful as the album’s namesake, Inanna. One wonders if Han’s focus on mythology is, in part, an attempt to position herself inside the continually growing mythology of modern American jazz, and given her drive and her skills, this position seems all but secured.

Two years ago, Han was named a Steinway Artist, a title given by the legendary piano maker to some of the best and brightest pianists in the world. JAZZIZ magazine named her an artist to watch in 2019, and in the few short years since she has burst onto the international jazz scene her profile continues to rise. Secrets of Inanna is her fourth album, and like the previous three, it is already garnering rave reviews.

Han claims Chick Corea as one of her influences, and you can hear this influence in the playful chordal phrasing, at times delicate and lyrical, other times proud and nearly angry sounding. Han and band cover Corea’s “Desert Air”, from his 1972 ECM album with Gary Burton, Crystal Silence. The only other cover song on the album is a track originally played by Hubert Laws, “Morning Star”, from Laws’ 1972 album of the same name. It’s interesting that both of these covers come from albums released in 1972, and the lyrical expansiveness of Secrets of Inanna shares some kinship with these classic albums from the early days of jazz fusion.

In translating to music the story of Inanna’s journey from heaven to the underworld and then back out again, Han enlisted a small group of jazz luminaries as her backing band.

On drums, the album features her long-time collaborator and producer, Bill Wysaske, who’s expansive and deft playing fills the spaces and keeps the band hurtling forward. His drumming is propulsive yet it leaves the band room to breathe and stretch out, especially on the slower numbers, such as “Wind Rose Goddess”, and on the previously mentioned cover of Hubert Laws’ fusion classic “Morning Star”. Wysaske plays a short, just under a minute, drum solo on “Ninshubur’s Lament”, and it’s lovely and unexpected to hear a drum solo, which are usually brash and frantically paced, as a lament.

Legendary bassist John Patitucci fills out the rhythm section. Patitucci has had a long and storied career, and has played with Wayne Shorter, Chick Correa, and Herbie Hancock, among others. He knows instinctively when to lay down a solid backbone and when to get expansive.

Rich Perry has tenor saxophone duties, and lays down quieter, more stately paced riffs that help to balance out the often snappy pace of the rest of the album. This thoughtful approach is most apparent on the track “Vesica Piscis”, a duet with Han, where the pianist builds a solid foundation and lets Perry unfurl his notes into long slow lines. It’s a beautiful moment, and the interplay between the two is breathtaking.

Katisse Buckingham plays alto flute and piccolo on a few tracks, including on the album’s call to arms and opening song, “Prima Materia”, and then again final track, “Enki’s Gift”. This expansion of the album’s instrumentation in the first and last track helps illustrate and define the thematic hero’s journey Han used as inspiration for the album.

As the weather turns cold this fall, and you find yourself longing to stretch out, to go on a little journey, you could do a lot worse than following Han and crew as they set to music Inanna’s winding path down to the underworld and then back out again. It will take you through some twists and turns, some highs and lows, but it will be a journey you’ll be glad you took.

Secrets of Inanna is out now on Mack Avenue Records.