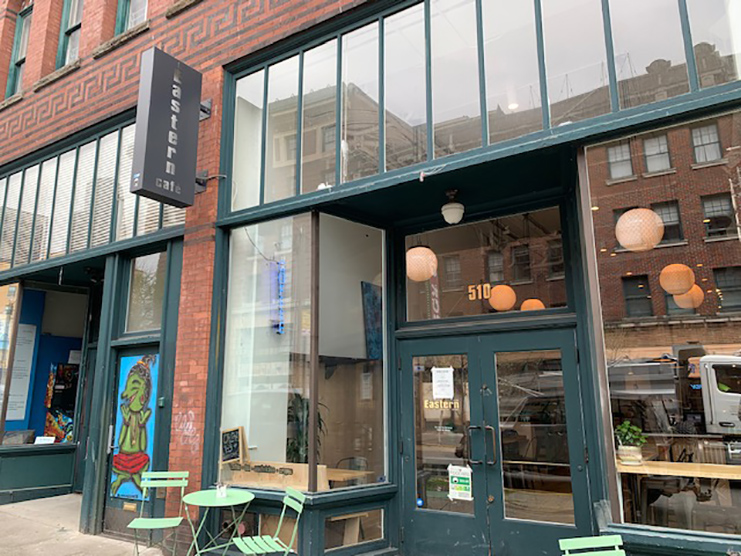 If you are looking for a sign of change in the Chinatown International District, you may want to stop by Eastern Cafe.

For Connie Au-Yeung, that’s exactly what she did when the coffee shop on Maynard Avenue reopened its doors in early March after being shut down for nearly a year and a half due to the COVID-19 pandemic.

“It used to be my hangout ever since I was in college so I was sad when it closed,” said Au-Yeung, who now works as the communications and marketing manager at the Chinatown International District Business Improvement Area (CIDBIA). “I admit the reason I want it to reopen was a little self serving. I still had a bunch of their stamp cards and gift cards and I wanted to use them!”

“It’s people like Connie that makes Eastern Cafe special,” said I-Miun Liu, owner of Eastern Cafe. “I love the communal aspect of the cafe and there’s a lot of support from the neighborhood. People wanted that connection.”

Liu first opened Eastern Cafe in 2013. He said back then there weren’t many “western” style cafes in the Chinatown ID and he wanted a place where people can gather, study and meet for work. And Liu said, despite a slow start, the vibe caught on.

“Over time, it became a meeting spot for a lot of people in the neighborhood. Local organizations and city council workers started coming by. Eventually, even the old school Chinese people from nearby businesses found us, too. And then we got the writers and the artists who would come down and hang out to paint and draw. It became a unique place in the neighborhood.”

This neighborhood staple unfortunately could not escape the financial challenges that came with the COVID-19 pandemic. Many local restaurants, bars and cafes were forced to shut down. Liu said he made the difficult decision to close Eastern Cafe in 2020, not knowing if he would ever reopen.

“We also own Oasis Tea Zone, and that business took a hit but it bounced back a lot faster than Eastern. It’s easier for people to make their own coffee at home. Boba drinks … not so much” said Liu. “As time went on, I was on the fence on what to do because the expenses were climbing. Whether it’s the labor, food, taxes or rent. When you mainly sell coffee, you can’t keep up with the rising costs.”

But along with the mounting bills, Liu also received support from local API organizations like the CIDBIA which provided grants for many small businesses struggling to stay afloat.

“We did get the big grants from the government, but those took much longer to come in, and I had to do a lot more paperwork. The smaller grants came much faster and helped pay the rent or at least part of the rent.”

That financial support got Liu what he needed to reopen Eastern Cafe this spring, but he said getting back to 100% will not be easy. Staffing and supply shortages are a big issue, but he’s doing what he can to keep the doors open.

“We are on limited hours but we are open seven days a week,” he said. “It’s been challenging but it’s also fun to get Eastern Cafe going again. I think this neighborhood is ripe for a rebirth and people are definitely coming back.”

Among them, Connie Au-Yeung, who said she got a pleasant surprise on her first day back to her old hangout.

“I asked the manager at Eastern if I can use my old stamp card. And he actually took it!” said Au-Yung. “I think this all goes to show a business does not have to close permanently. The pandemic is hard but with community support and encouragement, that can make a difference.”